Blessed Trinity School Honored for Spirit of Welcome and Inclusion 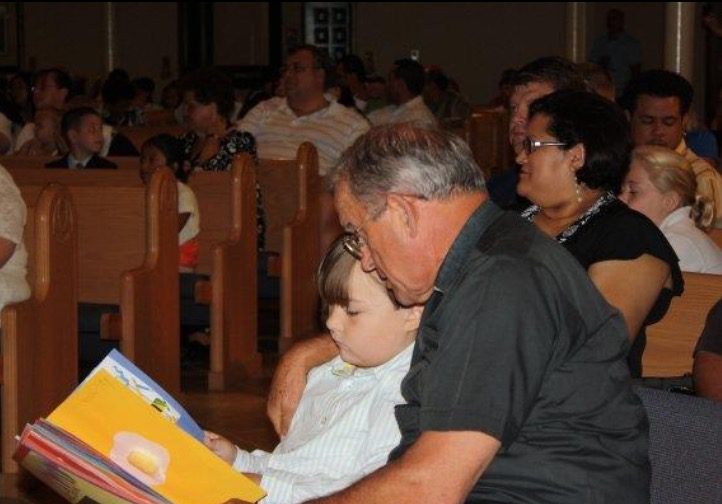 August “Gus” was born with autism. He is the first and only student at Blessed Trinity School in Ocala with such a disability. This month, the school was honored with the Dandy Award from the National Catholic Board on Full Inclusion (NCBFI), for taking a leap of faith and accepting Gus as a student seven years ago with no special education teacher, program, guidance or funds simply because it is the right thing to do.

When Gus was about to begin kindergarten, “he was barely verbal,” said his mother, Heidi.  “The assumption from his therapists, his doctor, and our friends and neighbors, is that he would go to public school rather than our parish school, Blessed Trinity, where our daughter was a student.”

But Heidi and her husband wanted a Catholic education for Gus, so they approached pastor, Father Patrick Sheedy, and principal Jason Halstead.

Heidi said, “There was surprisingly little discussion.” Mr. Halstead said, ‘Let’s try it,’ and Father Pat said, ‘You do your part, we’ll do our part, and God will take care of the rest.’ It was amazing – just exactly as we, as a Catholic community, should be!”

That conversation was the beginning of a difficult, but rewarding journey leading to Gus’ graduation this month from the 8th grade.

Gus defines his disability in an article he wrote for school like this: “Autism is kind of like a disorder of some sorts. It’s different for different people because autism means your brain is wired differently and so every person who has autism has it in a different way.” He added, “For me, I like that I see things differently than other people because it gives me a different perspective on things and makes me more creative…  The difficult thing for me is that it’s hard to pay attention in class and sometimes my thoughts get me distracted.” This has been Gus’ greatest struggle.

Some years were harder than other, but Heidi credits the teachers’ can-do attitude with his success. She explained it in her nomination letter to NCBFI. “At the beginning of each year, teacher after teacher has said, ‘I have no experience with teaching children with autism, so tell me what works for Gus.’”

They learned together. From office nurse Sister Theodozia Namuddu to Gus’s teachers, and his fellow students, the community grew in understanding, compassion and faith.

The board website explains why the award is named after the dandelion. “It is the best way we can illustrate the power of inclusion. Those seeds of welcome don’t just take root in one place, they launch into the world and spread their welcome everywhere…because everyone is influenced for the better when students with disabilities are part of the whole… It is done because these people actually live their lives as a social justice mission. They take a gigantic leap of faith — and the net appears. They figure it out and find a way to make it work. They think creatively. They find the funds. They make the decision to be inclusive and that simple decision changes everything. That decision influences children and families and members of the community outside of the school. It ripples.”