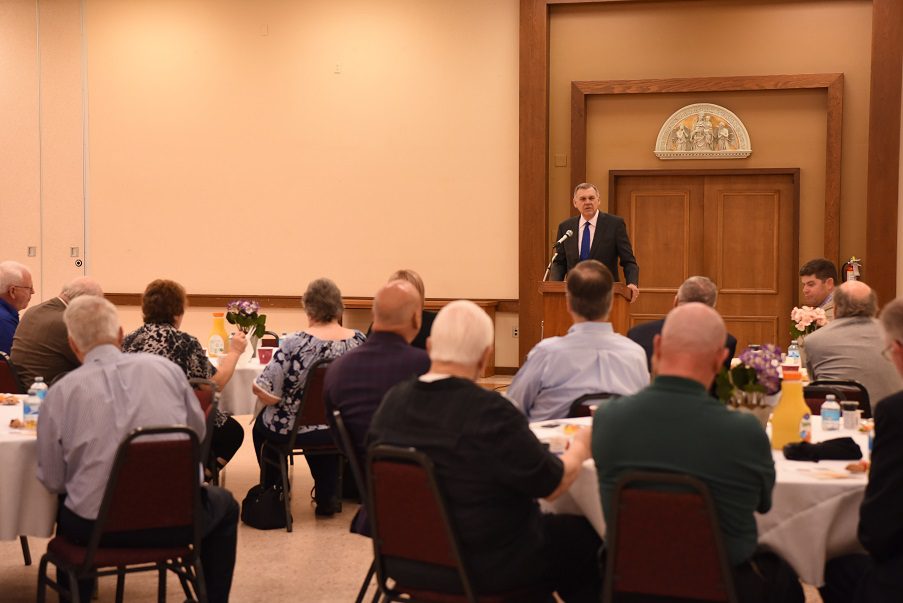 Catholic business leaders across Central Florida, you have been called: Called to evangelize and live gospel values in the workplace. Dozens of professionals gathered at Annunciation Parish in Longwood May 30 for the presentation “Living in Christ: proclaiming and sharing our faith in the world.”

Bishop John Noonan welcomed everyone warmly, then got right to business. He explained it became clear after the Convocation of Catholic Leaders in Orlando last July, the message must be heard at the grassroots level. Quoting Pope Francis’ Exhortation, Gaudete et Exsultate, Bishop Noonan shared, “We are all called to holiness, whatever our role, ‘by living our lives with love and bearing witness’, and in the everyday turning to God.”

Bishop went on to explain families are changing, neighbors often don’t know each other, people are not going to church like they used to. “The only place people are gathering is the workplace,” he noted. “You as leaders have to become the Spirit at work.”

Gary Tester, executive director of Catholic Charities, agreed. He expressed his belief that there is currently a lack of conviction of faith in leadership. “What is in our heart should guide every decision we make,” said Tester. “It should be articulated in every word and action. There is never a moment when I’m not Catholic. I can’t put it aside and I hope it’s the same for each of you.”

Former U.S. Senator Mel Martinez brought that message to life for those in attendance. Due to political turmoil, Martinez entered the U.S. through the Unaccompanied Cuban Children’s Program in the 1960s. He bounced from camps to foster homes, before becoming a successful lawyer and public servant. Through it all, Martinez says his Catholic faith remained strong and the Blessed Mother comforted him in times when his family could not be there.

Martinez revealed, “I always felt I had to give back because so much had been given to me. I decided to go into public life to continue to give witness to my faith.” And that he did. While Mayor of Orange County in the late 90s, Martinez worked to prevent school overcrowding and helped launch after school programs to keep children safe.

His dedication continued in Washington, DC. Martinez was the first Cuban American on President George W. Bush’s cabinet and Secretary of HUD (U.S. Department of Housing and Urban Development) during the 9/11 attacks. Martinez helped lead the rebuild of lower Manhattan while continuing to battle homelessness across the nation. “We’re people first and foremost. Americans first and foremost. It’s about helping people,” he stated. Martinez went on to urge local business leaders to let faith shine in all they do.

Bishop Noonan reminds us, “Salvation of the world lies in the human heart. Sainthood is not about being perfect. It’s about coming to know the Lord in your life. We must be living examples to those we live and work with.”