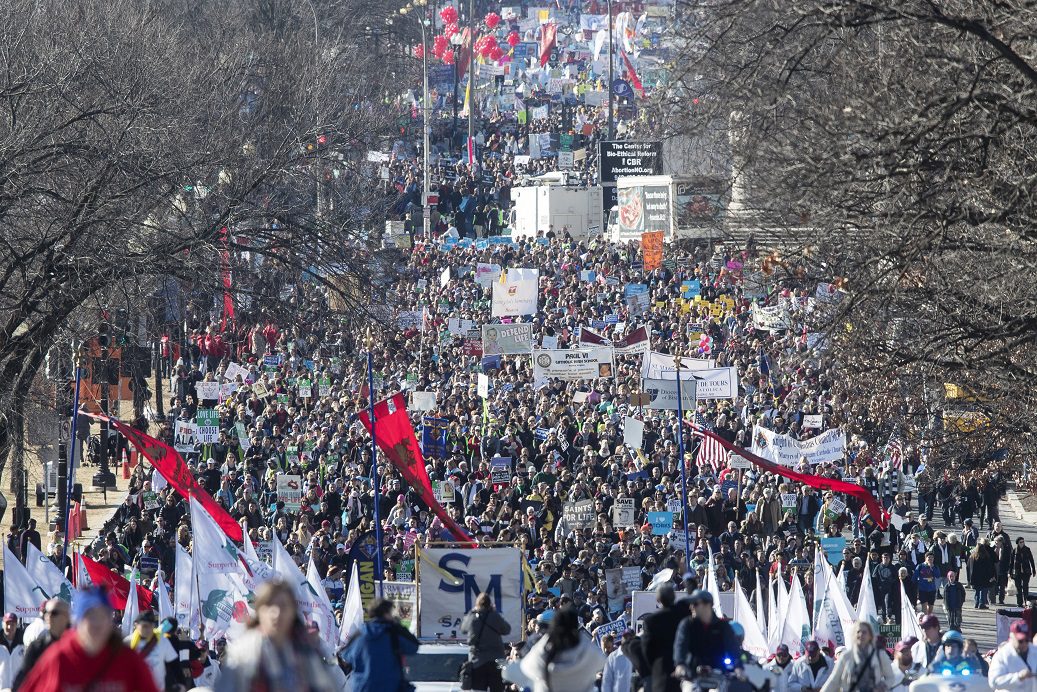 People walk up Constitution Avenue headed toward the U.S. Supreme Court while participating in the 45th March for Life Jan. 19 in Washington. The 2019 March for Life is Jan. 18 and the theme will be “Unique from Day One.” (CNS photo/Michael Reynolds, EPA) See MARCH-FOR-LIFE-THEME Oct. 18, 2018.

ORLANDO I “I wasn’t always pro-life,” admits Carly Grimison, a senior biology student at the University of Central Florida. “It’s been a journey for me.” Contrary to the norm, college led this young woman to a deeper prayer life and the more she learned, the more she began to question her own beliefs.

Grimison is now part of the Catholic Campus Ministry (CCM) and plans to join faithful peers on a trip to the March for Life in Washington, D.C. on January 18. She credits her studies with her change of opinion. “Science has always been something that I’ve loved and connected with,” she shared. “A lot of the arguments that convinced me were scientific.” She explained the fact that DNA is present at conception truly opened her eyes. “That’s the whole reason that I’m pro-life now.”

CCM will join hundreds of thousands of others for a peaceful and prayerful public witness to defend human life and the rights of the unborn in the nation’s capital. “A lot of people don’t really expect young people to be passionate about something like this because it’s so against what is popular to believe right now, at least in our age group,” said Grimison. “It’s hard to put yourself out there to say what you believe when you know what kind of backlash you can receive from your peers.” After changing her mind, Grimison remembers having difficult conversations with both friends and family.

Brother John McCabe, BH will lead the group from CCM. “It’s good for us to be involved in saying this is not okay,” he explained. “The march itself can be an eye-opening experience for a young Catholic. It’s so much bigger than protesting Roe vs. Wade.”

This year’s theme “Unique from day one,” focuses on pro-life’s pro-science evidence. The march’s website explains, “Medical and technological advancements continue to reaffirm the science behind the pro-life cause – that life begins at fertilization, or day one, when egg meets sperm and a new, unique, human embryo is created.”

Initially Grimison believed she could not be both pro-life and a strong advocate of women’s rights. “Once I realized they go hand in hand… believing in the dignity of any life, that of an unborn fetus and the dignity of a woman…,” Grimison said she was able to let go of her preconceptions. “Dignity is God-given. When a woman chooses to keep a baby, that upholds her child’s dignity and affirms her value of herself.”

Brother McCabe is excited for the students to experience the united faithful front. “It’s a vast sea of people in a prayerful environment,” he said. “For students to see this happening and experience it with thousands of people who want to be there is great. It’s like a giant Catholic reunion for the country. It says life is beautiful and this is important.”