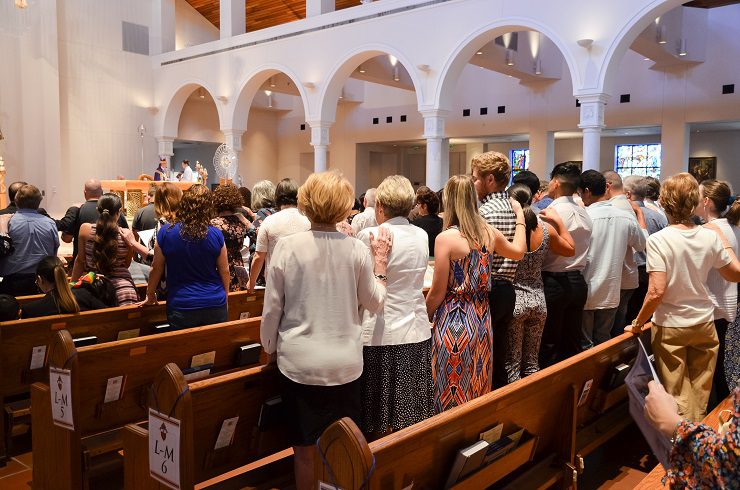 More than 460 Catechumens of all different ethnicities and ages from around the Diocese of Orlando came together to become one with Jesus during the Rite of Election on Feb. 18 at the Basilica of National Shrine of Mary, Queen of the Universe.

Sixty-two parishes, basilicas and missions were represented in the journey to be initiated in the Catholic Church. They were invited to sign a book and were presented to Bishop John Noonan. “This is part of your journey,” explained Bishop Noonan. “From this day now until celebration of the Easter sacrament, you will be called the elect of God.”

Lent is a period of preparation marked by prayer, study, and spiritual direction for the Elect. The Celebration of the Sacraments of Initiation takes place during the Easter Vigil Liturgy on Holy Saturday when the Elect receive the sacraments of Baptism, Confirmation and Holy Eucharist.

“Jesus was 40 days in the desert to shows us the time of preparation,” said Bishop Noonan. “You are in preparation to receive Jesus Christ. For the next 40 days, we need to hear the word of God. Pope Francis tells us you can see with your mind. Listen with your heart. How do we do that for the next 40 days – through prayer. This is the time to repent. For God will always lead you, protect you and guide you.”

Dawn Jean from Ascension Catholic Church in Melbourne said she made the decision to become Catholic after the baptism of her second child in October. Prior to attending Catholic Masses, Jean, whose father was Jewish, grew up attending all types of churches and most recently attended a non-denominational church. However, she decided to pursue her Catholic faith after marrying her husband in 2011.

“This has brought me closer to God. It definitely has been amazing,” she said. “It immediately makes you a part of a community.”