Tallahassee, FL– On February 8 at a luncheon during Catholic Days at the Capitol, Bishop John Noonan and the other bishops of Florida presented two state legislators with the Florida Catholic Conference Defensor Vitae (Defender of Life) Award for their ongoing, courageous and valiant defense of the sanctity of life. 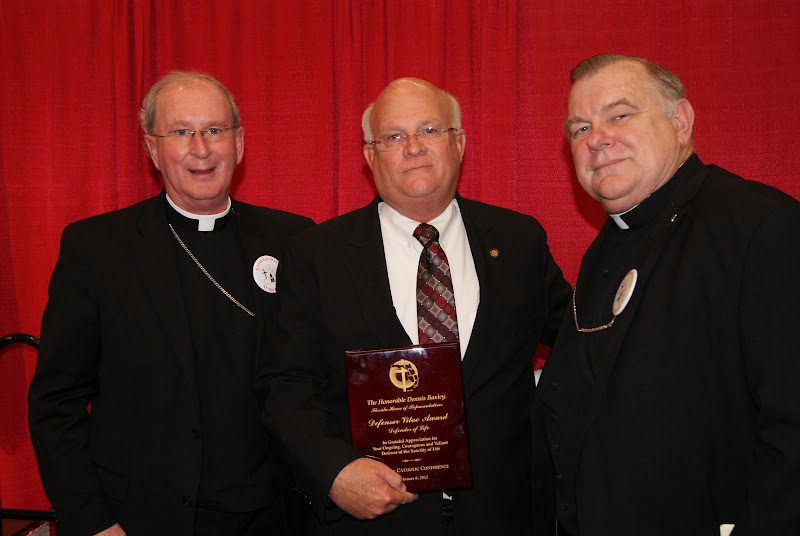 Tallahassee, FL – On February 8 at a luncheon during Catholic Days at the Capitol, Bishop John Noonan and the other bishops of Florida presented two state legislators with the Florida Catholic Conference Defensor Vitae (Defender of Life) Award for their ongoing, courageous and valiant defense of the sanctity of life. In attendance for the awards presentation in Tallahassee were the bishops of Florida, several state lawmakers and more than 300 Catholic faithful from throughout the state.

Since her first year in the legislature, Senator Ronda Storms has been an advocate for life. In 2006, as a freshman senator she sponsored a parental notice of abortion bill. Although that bill did not pass the legislature, she has gone on to co-sponsor several other pro-life bills during her term in the Senate. In 2011, Senator Storms sponsored SB 1744, requiring that an ultrasound be performed prior to an abortion, which passed the legislature and has now become law.

Senator Storms has served as Chairman of the Senate Children, Families, and Elder Affairs Committee since her first year in office. She tackles the issues with passion, and the bills she sponsors and supports reflect her commitment to the least of our brothers and sisters. These include bills that help babies abandoned under the Safe Haven law, children available for adoption and in foster care, as well as the elderly in assisted living and the disabled.

During the presentation of the Defender of Life Award to Senator Storms, Sheila Hopkins, Florida Catholic Conference associate for social concerns/respect life, stated, “Senator Storms says she has three priorities in life: love the Lord, love her family and stay true to the purposes for which she committed when elected.”

Rep. Baxley has been a champion for life ever since he was first elected to the legislature in 2000. Rising to the position of Speaker Pro Tempore of the House, he left in 2007 to return again in 2010 after serving as the executive director of the Christian Coalition of Florida. Rep. Baxley is currently the Chairman of the House Health and Human Services Access Subcommittee.

In 2011, Rep. Baxley sponsored a joint resolution, HJR 1179, which proposes an amendment to Florida’s Constitution to prohibit public funding of abortions and prohibit our State Constitution from being interpreted to create broader rights to an abortion than the U.S. Constitution. The resolution passed the legislature, and the proposed amendment will appear on the 2012 General Election ballot. Last year, he also sponsored HB 501 to ensure fees collected on Choose Life specialty license plates are distributed to crisis pregnancy centers that assist women and their children. The bill passed the legislature and is now law.

“Rep. Baxley is a great source of support, encouragement and practical wisdom to his pro-life colleagues in the legislature,” said Michael Sheedy, Florida Catholic Conference, associate director for health, during the presentation of the Defender of Life Award to Rep. Baxley.

Catholic Days at the Capitol is held annually during the Florida Legislative Session. Catholics from around the state gather in Tallahassee for a legislative briefing before attending scheduled meetings with their elected officials. Each year, during a luncheon for participants, selected lawmakers are honored for their work in the Florida Legislature. Click here for a list of past award recipients.

The Florida Catholic Conference is an agency of the Catholic Bishops of Florida. It speaks for the Church in matters of public policy and serves as liaison to the executive, legislative and judicial branches of government. The archbishop and bishops of the seven (arch)dioceses in Florida constitute its board of directors.