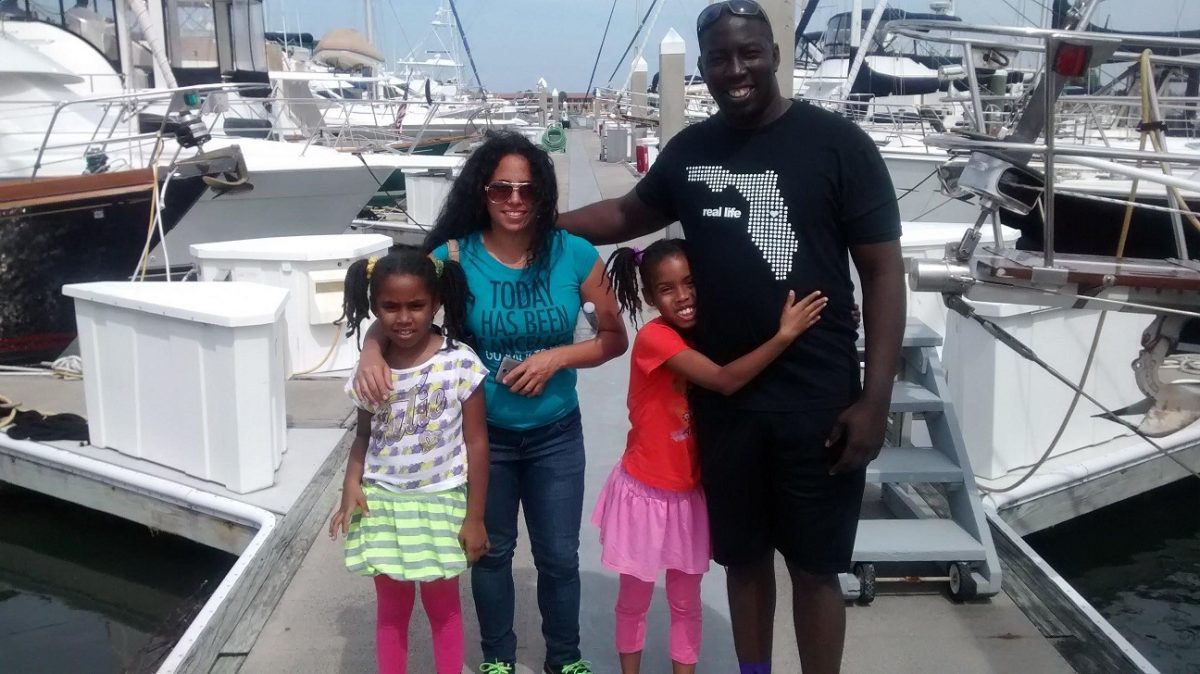 When Lisandra Bientz and Sadiel Polledo first came to Catholic Charities of Central Florida (CCCF) two years ago, their life looked very different. The couple, who arrived as refugees from Cuba with their two daughters ages 11 and 9, had little money, knew very little English and needed help to rebuild a new life in the United States.

“It’s the story of 11 million Cubans,” explained Sadiel. “There is a reason why people build a poor boat and cross the ocean to get here. The Cuban people are in misery.” Sadiel was a physical therapist back home, he added “If you study to be a doctor, you would only receive about $425 per month. You can help people, but you cannot make enough money to support your family. Young people there have learned no matter how hard you study for your degree, you cannot do anything with it. ”

“I was a social worker in Cuba. My biggest disappointment was I wasn’t able to help anyone because there were no resources, the work felt useless,” says Lisandra. The couple, who also served as pastors in Cuba, described the lack of religious freedom. “The government will say there is religious freedom, but we could not legally have a place to gather. Any time we tried to build a church, the government would take over,” Lisandra explained.

“For example, our children had to honor the death of (so-called) heroes of the country, by throwing flowers into the sea, people who did not have a good life, not the kind of person to be proud of;  fighters for the ‘revolution for freedom’, a freedom the Cuban people do not have,” says Sadiel.  “It’s hard to explain because things that happen in Cuba don’t happen in the rest of the world.  If you have freedom you can change things, but if you don’t it is like being in jail,” Sadiel added. Now, as permanent U.S. residents, Lisandra says, “We are so proud to be part of a nation that honors soldiers who fight for the freedom of this nation and for the freedom of other nations; for true values.”

When they first arrived, Lisandra and Sadiel went to Catholic Charities Comprehensive Refugee Services (CRS) program for guidance. Their case manager helped both parents enroll in English classes and assisted Sadiel in his job hunt. The trained physical therapist started working at a landscaping company just to pay the bills.

“We see a lot of clients who were professionals, like Lisandra and Sadiel, and encourage them to go to school and get the English needed to progress. The reality is they have to start over. It is hard and overwhelming. We talk to them about technical school and lead them on the right path, and encourage them that their lives can improve,” explains employment services coordinator Daisy Clemente.

“It was a hard process at first,” says Lisandra of her adjustment to her new country. “The children learned English very quickly, while my husband and I struggled for hours every day. It was embarrassing at times, but I had to try. My teacher challenged us to speak in class. I knew I had to challenge myself in order to achieve.”

Their hard work paid off. Lisandra and her husband now speak English. Sadiel completed his massage therapy training two months early. Lisandra aced her lab assistant program and graduated with honors as a phlebotomist. They both have new careers.

“We are really happy, but it’s not the end,” says Lisandra. “This is a beginning for us, it’s not the top of the hill. We can do anything with God’s help. We kept our faith and prayed and doors were opened for us that weren’t supposed to open. Thanks to Catholic Charities and Ms. Daisy who offered the guidance we needed. I want everyone to know it is worth it to help people from other countries, people who will have a career that is valuable to the community. We are grateful for that and it was worth it.”