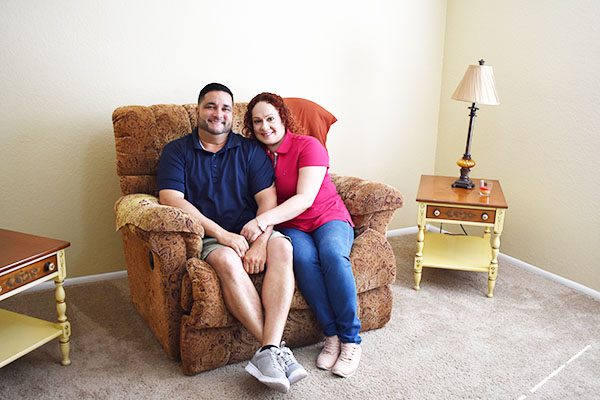 Thanks to Catholic Charities, Luis Gonzalez and Lourdes Cruz settle ino their apartment after starting their new life in Orlando due to Hurricane Maria. (GLENDA MEEKINS)

Six months after Hurricane Maria rocked the island of Puerto Rico, families are still arriving to the U.S. seeking refuge from their weather ravaged homes and an opportunity to begin anew. Several agencies are still supporting the immigrants with the transition. Among them is Catholic Charities of Central Florida, which continues to serve in areas of housing, food and other basic needs. Lourdes Cruz and her husband, Luis Gonzalez, were the first to receive assistance through a Catholic Charities USA grant, created specifically for Hurricane Maria victims coming to the U.S.

Cruz came from Puerto Rico Nov. 20 to stay with her brother and his wife after Hurricane Maria left her mountain town of Aguadilla and her beauty salon without power or water. Her goal was to find a job and open the path to a new life in the Orlando area, hoping her husband could soon follow. Gonzalez still had work as an electrician, so he remained until Cruz could get them established.

By the time Cruz arrived, the Orlando International Airport Help Center had moved and changed names. The new Multi-Agency Resource Center is where Cruz found work in the area of maintenance. It was there that she made friends who guided her to other agencies that could help, including someone at the Latino Leadership table that referred Cruz to Julio Rivera from Catholic Charities of Central Florida.

At the time, Cruz was living in a local hotel temporarily covered by FEMA. She had just notified her husband that it was time for him to come. With only three weeks for Gonzalez to find a job, he followed up on a tip from a friend in Puerto Rico and was accepted for employment five days after arriving. It was then that Rivera reached out to them. With the hotel stay coming to an end on Feb. 14, the couple quickly applied for the CCUSA grant and were able to move into their new home on Valentine’s Day. “It was a great gift,” said Gonzalez, as he and Cruz looked at one another and smiled broadly.

With the help of Catholic Charities, they were able to secure the deposit and pro-rated sum needed to move in to their one bedroom, one bath apartment in South Orlando on Valentine’s Day. “Catholic Charities’ help represented the beginning of a new story for us,” said Gonzalez. “The reality of the situation is, that if Catholic Charities had not stepped in to help us, we would have been sleeping in the car. It was an incredible help.”

“For us, this is comfortable,” added Cruz referring to the small apartment. “It’s simply a matter of adapting ourselves.” Being simple and humble people, Cruz says they have what is necessary and practical, and that is enough. Together, the two manage sharing one car that they recently purchased. “He takes me to work and then he goes in at 3 p.m.,” explained Cruz. Due to their schedules, they see one another about 15 minutes a day, except for weekends and Fridays when Gonzalez is off and volunteers at the Center. “There are sacrifices, but there are rewards. Where there is a will, there is a way,” says Gonzalez. “Nothing is impossible for God.”

The pair has not forgotten their family abroad. The day of our interview, Gonzalez had sent some of his savings home, to help his family. With water and electricity still being rationed in Aguadilla, most schools have reopened, but both admit that the recovery process will be long. Cruz left her 22-year-old daughter behind who remained attending the University of Puerto Rico in Mayagüez, one of the first towns to receive power and water. Gonzalez left his parents and his son who is a senior in high school. The couple hopes both children will come to visit in the future and consider moving to the U.S.

Looking toward the future, Gonzalez said, “We will go wherever God leads us.” Although they still miss their home in Puerto Rico with its over-sized patio and banana trees, Gonzalez and Cruz are grateful. “God has opened doors where no human being would have done so. Thank goodness, we are here,” acknowledged Gonzalez.

Since February, Rivera said several others have been helped through the CCUSA grant. And as of March 1, CCCF has partnered with the United Way to further assist those arriving from Puerto Rico after Hurricane Maria. They will be providing additional assistance with base rent, first month utilities and day care.