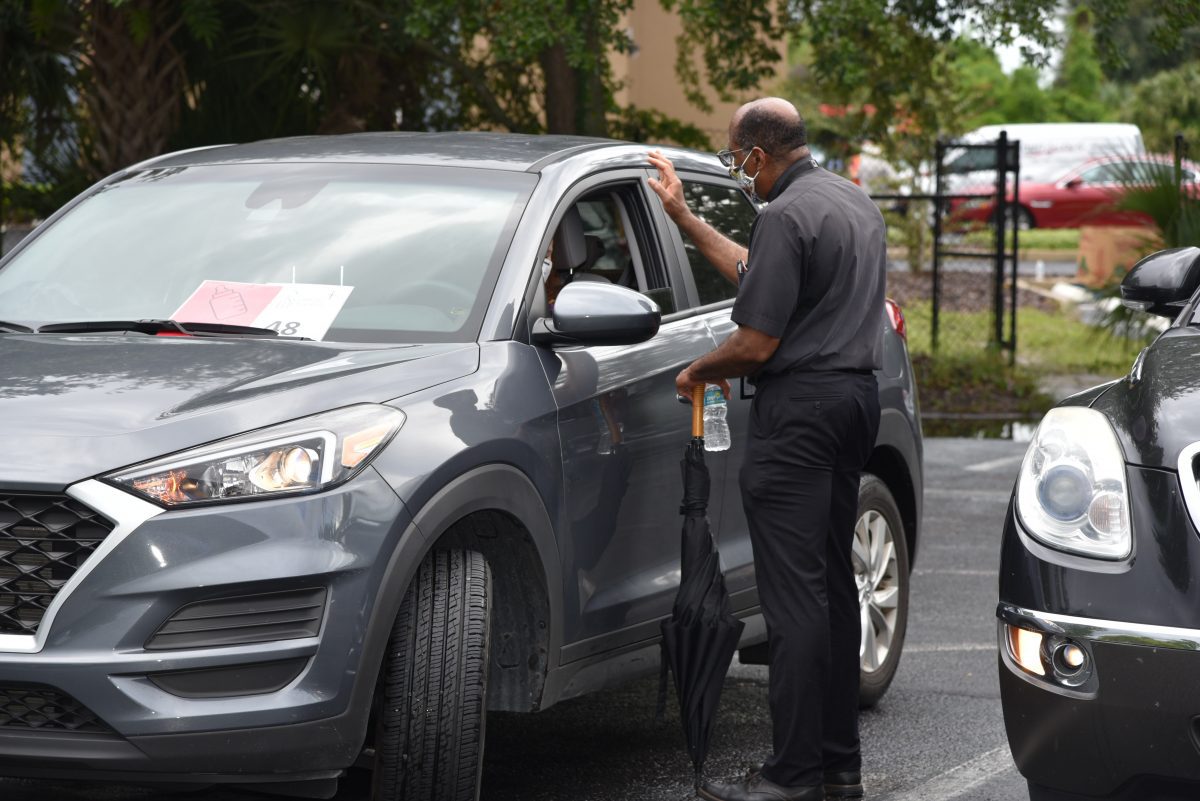 Father Anthony Aarons prays with mothers as they wait in line to pick up diapers, wipes, and supplies to help care for their children at Catholic Charities of Central Florida, Sept. 11, 2020. (GLENDA MEEKINS | FC)

ORLANDO | Jessica Greponne pulled up as volunteers sprang into action at Catholic Charities of Central Florida’s first diaper distribution – their first step in Walking with Moms in Need: A Year of Service, an initiative of the U.S. Conference of Catholic Bishops. Greponne’s 2-year-old daughter smiled and waved, squealing with delight from her car seat as volunteers passed her window, loading diapers, wipes, and laundry detergent into the trunk. Her 2-month-old sibling slept soundly, tucked in a carrier next to her. 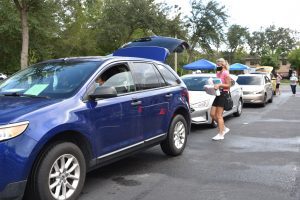 After recently losing her job, Greponne was scrolling through Facebook when she saw a post announcing the free distribution of supplies. “It’s a lot of help because we (she and her husband) have a newborn,” she explained. “With everything going on we have less income coming in the house.”

As Greponne pulled out of the parking lot, Father Anthony Aarons, a missionary of mercy appointed by Pope Francis, continued walking from car to car, praying with moms, accompanied by Deacon Juan Cruz. It was his desire that families would be prayed for and most waiting in line took them up on the offer. Several pregnant women asked to have their unborn children blessed. Earlier in the day, Catholic Charities gathered to pray the Divine Mercy chaplet, interceding for the families they were soon to serve.

The idea of a mobile diaper drop came to Leidy Rivas, director of the Culture of Life Office at Catholic Charities of Central Florida (CCCF), while sitting in Eucharistic Adoration. She asked the Lord how He wanted her to help and she felt He was clear that a diaper drop was His response. Four days later, she received confirmation that the Holy Spirit would make it possible. The Knights of Columbus called informing CCCF that Food for the Poor had a shipment of diapers, wipes, toiletries, and hygiene products they desired to donate. After discerning the ideal time families could make the pick-up, the mobile drop was set for Friday afternoon, Sept. 11.

In four days, 151 families registered with another 30 put on a waiting list – offering assistance to 268 children.

The year-long commitment was scheduled to begin March 25, on the 25th anniversary of Evangelium Vitae (The Gospel of Life). COVID-19 set dioceses across the nation back, leaving the Diocese of Orlando’s official launch date to be Oct. 1.

In a recent letter to diocesan pastors, Bishop John Noonan wrote, “I join my brother bishops in asking, ‘Do pregnant women in need see the Catholic Church as a safe place to turn? Is the Church known for providing concrete help to mothers and fathers and families facing unplanned pregnancies?’” He invited the pastors to inventory their local resources to assist pregnant and parenting mothers, to find ways to improve their responses, and to pray and spread the word through homilies and bulletin inserts. 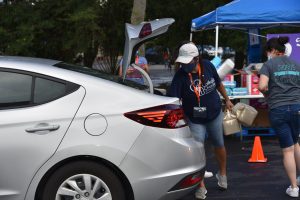 As parishes become involved in the nationwide initiative, Bishop Noonan and the USCCB hope the year of service will help parishes become aware of the pregnancy centers in their area and develop partnerships to better serve mothers in their communities.

Addressing the Committee on Pro-Life Activities for the U.S. Conference of Catholic Bishops last November as plans were being made, its chairman, Archbishop Joseph F. Naumann, of Kansas City, KS noted 75% women who choose abortion are low income and well over 150,000 low-income mothers deliver their babies at Catholic hospitals each year. Recognizing there are still many gaps in follow-up care and provisions for these children, the committee’s initiative is striving to remedy the situation.

In Evangelium Vitae St. Pope John Paul II states the faithful’s participation is founded in the sharing of Christ’s mission. The document notes, “… our support and promotion of human life must be accomplished through the service of charity, which finds expression in personal witness, various forms of volunteer work, social activity and political commitment. This is a particularly pressing need at the present time, when the ‘culture of death’ so forcefully opposes the ‘culture of life’ and often seems to have the upper hand. But even that is a need which springs from ‘faith working through love’ (Gal 5:6). As the Letter of James admonishes us: ‘What does it profit, my brethren, if a man says he has faith but has not works? … So faith by itself, if it has no works, is dead’ (James 2:14-17).”

At Catholic Charities, works continue to abound. Gabriela Alcaraz, another mother who came for the CCCF distribution, affirmed this with her gratitude. She has four children ages 13, 10, 3 and 2 years old. “This helps us tremendously because my husband only works a few hours and this helps us for the entire family. He is the only provider now,” she said. “Thank you, Catholic Charities. Please keep helping because there are many families in need.”

By Glenda Meekins of the Florida Catholic, September 14, 2020