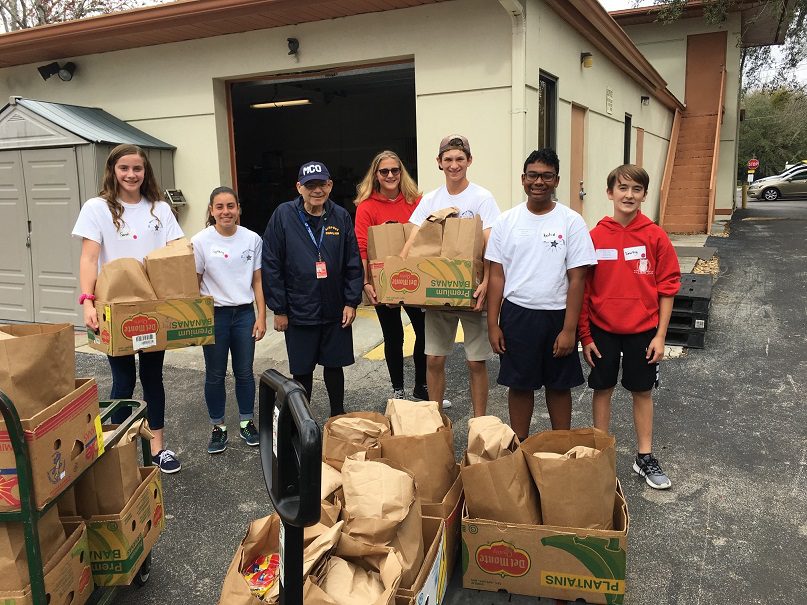 ORLANDO | Three weeks after the government shutdown began on Dec. 22, Transport Security Administration (TSA) employees felt the absence of a regular paycheck. Since the beginning, strangers and corporations stepped up to help nationwide. On Jan. 14, TSA set up an official food drive to help employees and manage donations at Orlando International Airport. It was then that Carmen Burgos stepped into action coordinating the food drive for fellow TSA employees. With the help of airport chaplain, Father Bob Susann and Catholic Charities of Central Florida (CCCF), the drive successfully helped feed 900 employees and their families.

Burgos is TSA deputy assistant federal special director at the airport. Working under the direction of Systems Federal Director of Mission Support, Carlos Amado, Burgos began the task of distributing meals and supplies that arrived daily for the 400 employees on duty each day. She was assisted by Miggie Gonzalez, a St. John Vianney Parish parishioner who helps Father Susann as an altar server in the airport chapel, just behind a TSA security station.

Burgos and Gonzalez set up distribution in the breakroom as at least a dozen companies from Dunkin’ Donuts to Second Harvest Food Bank sent in toiletries, diapers and essentials. Other community outreach group provided meals.

Observing the concerted efforts, Father Susann approached Gonzalez and said, “As Catholics, we have to do something.” Reaching out to Catholic Charities, he procured 100 information sheets on available services, especially the mobile food market. Realizing that it operated during work hours, he arranged to pick the food up and bring it to the airport distribution center.

“When Father Susann reached out to Catholic Charities to inquire about food for the TSA Employees we were more than happy to assist,” said Julie Yetter, senior director of operations at Catholic Charities. “We immediately put together 30, 20-pound bags of food for the employees. If we can provide some sense of relief, hope, strength or encouragement during this time of need we are thankful. Catholic Charities will continue to work with Father Susann to supply food to the TSA employees when requested. We understand families may struggle to catch up due to the shutdown and we are there as an agency to help fill the gaps.”

With CCCF’s commitment, Father Susann gathered to food and called ahead as he neared the airport for help unloading. “When I saw Father Bob pull up with those carts, full to the top with groceries, it was very emotional,” noted Burgos. “That increased the team spirit and morale of all the officers. They felt taken care of.” She noted, “Father Susann is the best thing that could happen to us. He’s always there… Father Bob is (like) everybody’s father.”

Father Susann noted that there is still much concern over recurrence. “But they’re working hard,” he said. “Hopefully this thing will be resolved by prayer and good works. We’re supporting them with our prayers and with our food.”

By Glenda Meekins of the Florida Catholic – January 29, 2019