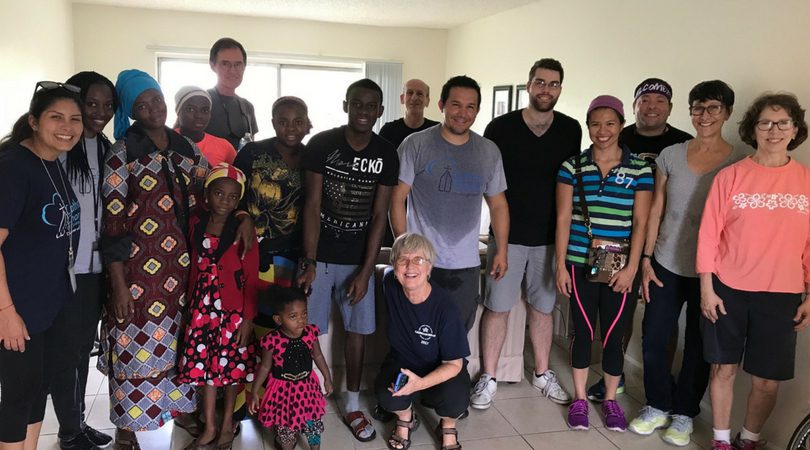 When Burundian refugee, Burakoze, and his family arrived at Orlando International Airport in April, he was greeted by long-time friends from the refugee camp in Tanzania, where he and his family lived for two decades. Catholic Charities of Central Florida (CCCF) program manager, Carolina Toro, and case manager Alice Ngamije, who worked behind the scenes for weeks preparing for the family’s arrival, were on hand to greet them as well.

“This was a special case,” said Toro. “The dad arrived with a medical escort because he has brain cancer and needed surgery right away. We have been working for weeks to coordinate the medical part of this case, so that he could receive treatment as soon as he arrived.”

From the airport, Burakoze went straight to a local hospital and was admitted to a rehabilitation facility to await his surgery. “He didn’t seem worried or scared,” said Ngamije, who provided the Swahili translation needed by the family. “He seemed so eager and told me ‘I’m ready for this.’”

Meanwhile, Burakoze’s family went to a local hotel, where another adult son and his family, who arrived in Orlando two years ago, greeted them with tears, hugs and kisses.

As part of the refugee services at CCCF, Ngamije gave the family an initial orientation, food, and emergency contact information. For the first month, the family had to stay in a hotel, until housing could be found.

“Trying to find housing for a large family here is extremely challenging,” said Toro. “We try to avoid putting people in the hotel for too long because it impacts their limited budget and gives us less money to help them with rent. Before arrival, we called everywhere to find housing. When they hear that it’s a family of 8, they don’t want to hear the rest. Refugees have no credit, no jobs, and no history, which makes it harder.” Ngamije added, “Finding a home for 8 people, with enough room that they will be able to afford on their own, is not easy in Orlando. The son had been looking too and was unable to come up with anything tangible. In the end, we were able to find a small place for them.”

While the family was in the hotel, volunteers and staff members visited them every day with food and even tutoring to get the children ready for school in the fall. That same team just helped the family move into their new home two weeks ago. The family seems to be adjusting well. Two of them are working at a local bakery. Two more are studying English so they can find work as well. “Fortunately, this family has outside support of friends who resettled before them,” said Ngamije. “They have received a lot of donations. They have someone to take them to the grocery store and show them how and where to shop, which is so helpful.”

During the past month, Burakoze had what seems to be a successful surgery, finished rehabilitation, and is settling in with his family. “They all seem very resilient, especially the father,” said Ngamije. “Immediately following surgery, I could see the difference in him. Before he had slurred speech, couldn’t communicate as well. Afterwards, he seems so much better, was making jokes, and getting around so much better than before.”

“The family still has a long way to go. The bigger family, the more expenses they have. They will need more people to be able to work to pay those expenses,” explained Toro. “It’s going to be tough and overwhelming at times. But, they are willing to work hard and I get a sense that this family is going to make it.”