Laura Elicerio, of Frostproof, wife and mother of three, traveled about 40 minutes on Wednesday (August 31) to get to the Centro Guadalupano Mission. 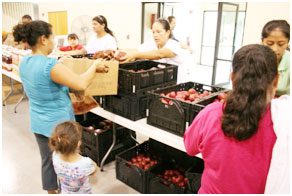 Laura Elicerio, of Frostproof, wife and mother of three, traveled about 40 minutes on Wednesday (August 31) to get to the Centro Guadalupano Mission. And she is no stranger to this drive; as for the past 20 years she has been making her way to the mission just about every weekend to attend the celebration mass and involve herself in her parish.  “This is the first time, I’ve come to something like this in Wahneta,” said Elicerio.

Elicerio lined up at the South Pastoral Center at the mission Wednesday to receive food and school supplies and she was not alone as more than 250 people lined up to receive the giveaways.  Agape Food Bank employees, part of Catholic Charities of Central Florida, and other parish and community volunteers gave out over 9,000 lbs of food, according to Michael Oberle, Director of the Agape Food Bank. Over 1,100 family members will benefit from the food and supplies given out during this mass distribution.

Father Norman Farland, pastor, Centro Guadalupano Mission, explained that the economy has greatly affected his parish, “People who get hurt the worse are the ones who have the least.” And as parishioners and other community members thanked Father Farland during the distribution, he says he didn’t decide to hold the distribution at his mission for a thank you. “One just wants to see them have a little more,” said Father Farland.

Sister Paula Schwendinger, has been at the mission since 1989 and was on hand to help people sign in. “A lot of families are really hurting as far as paying the bills. So I know they were grateful to receive the food,” said Sister Paula. With tears in her eyes, she too agreed that she did not involve herself for the praise, “I do this to be able to walk with them. And you know I spend a lot of time crying because I feel so badly for the situations that they are in.”

In past Catholic Charities food distributions, about 250-300 people have signed up to receive food; this distribution was no different. In addition to a food distribution, there was also a school supply giveaway to help families with children that just went back to school last week. Families received small packaged meats, fresh tomatoes, potatoes, macaroni and cheese, apple juice, a bag of canned goods and more. Supplies such as pencils, paper and folders were donated to the Agape Food Bank from Publix, the supermarket chain.

Brenda Reddout, the Western Region Director of Catholic Charities, rolled up her sleeves and got to work on Wednesday helping people in the line. She says Wahneta holds a special place in her heart; she used to volunteer at Wahneta Elementary School for many years. With a smile on her face, Reddout explained her love for Wahneta and her happiness for being able to give back, “Just seeing families in need. You know hardworking, beautiful families in need. And a community that was grateful for any and everything that was done in that community to help the children; to help the families.”  She wishes more could be done.

But for people like Elicerio, Wednesday’s distribution will go a long way. “Things are a little tight but I always say God never fails when called, there he is,” said Elicerio.

The Centro Guadalupano is located in at 2150 Bomber Road in Wahneta, Florida 33880. For more information on the Agape Food Bank and Catholic Charities of Central Florida please go to: http://www.cflcc.org.

Catholic Charities of Central Florida is supported through donations to Our Catholic Appeal, Alive in Christ Campaign, and its annual collection in November.