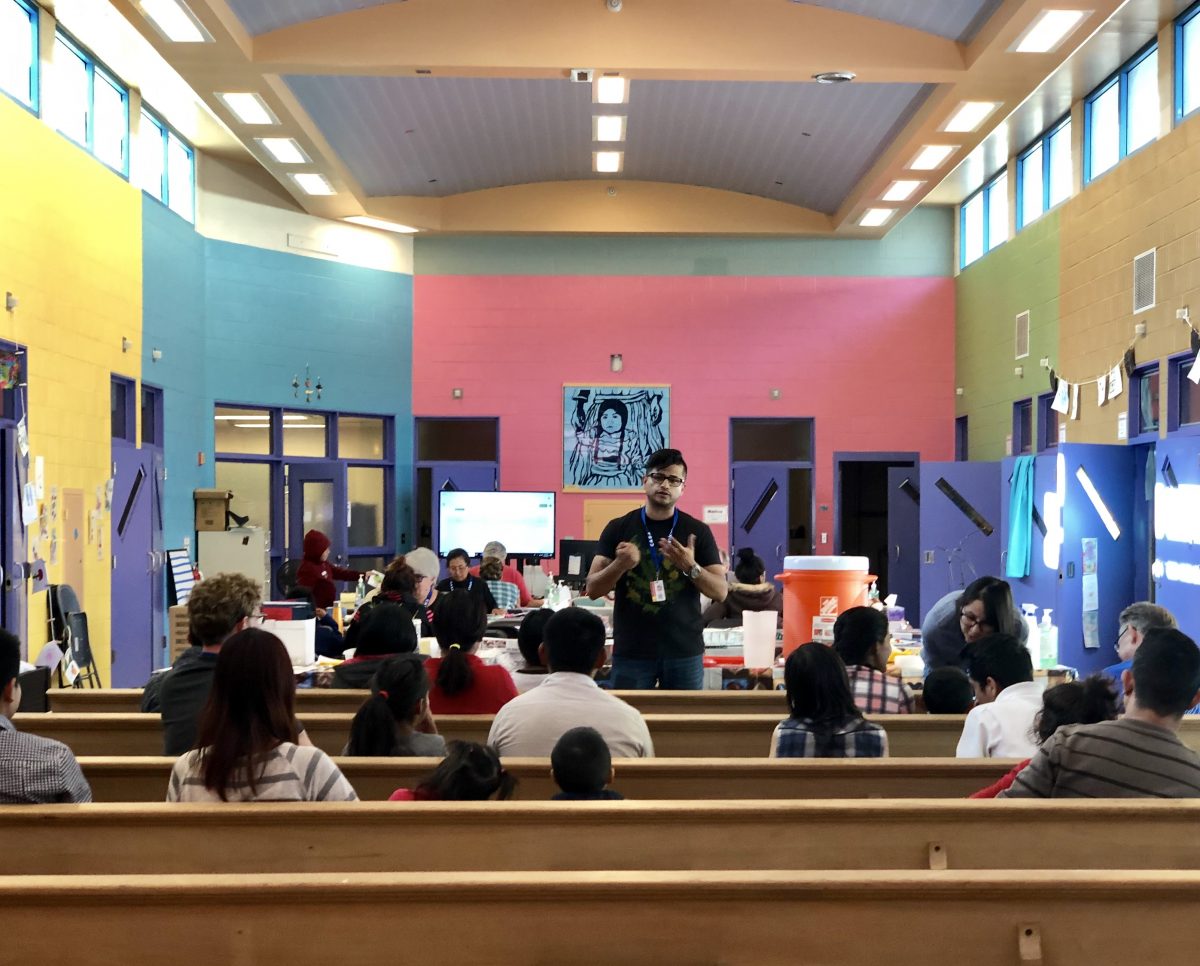 Editor’s note: The U.S. Catholic Church observed National Migration Week January 5-11. Acknowledging the “… more than 70 million people across the globe who have been forcibly displaced from their homes due to political instability, violence, and economic hardship.” Catholic bishops asked the faithful to “prayerfully unite and live out the Holy Father’s vision to welcome immigrants and refugees into our communities and to provide opportunities that will help them and all people of good will to thrive.”

Names of the married couple in the following article have been changed to protect their privacy.

ORLANDO | “You ask yourself every day whether or not you should have come when your life in one place was in danger, and you arrive at another and are still at risk,” said José, who fled Cuba last May. “It’s been hard to adapt. When I came, I thought I would be treated differently. I thought they would see what I was like and then judge me; not judge me first, then see who I was.” It wasn’t until José arrived in Orlando and worked with Catholic Charities of Central Florida that he felt welcomed.

José and his wife, Marta, an orthodontist, left Cuba after their families’ lives were threatened because Marta refused to go on a Barrio Adentro Medical Mission to Venezuela. She was disturbed after hearing about the violence other missioners encountered—working in war zones under gunpoint, stories of human trafficking and poor conditions leading to an increase in HIV, dengue fever and malaria. So in the spring of 2019, she and José flew to Nicaragua because there are no tourist visas for Cubans who want to come to the U.S. 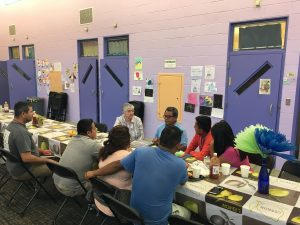 For the next three weeks they travelled by foot, bus, and horseback until they reached Ciudad Juárez, Mexico to turn themselves in and request asylum. Their group of 20 or so were sorted, handcuffed and taken to the nearby El Paso Processing Center. José spent 18 days living outside where less than a quarter of the detainees fit under a covered porch. Packed in with hundreds of men, he often waited up to two hours for the bathroom or a drink of water. He was unable to bathe or brush his teeth. Exposed to sun and rain, he became sick and went to the infirmary twice, but was rejected because it was full. Food was scant – a taco at 4 a.m.; some bread and warm juice around noon, and more bread in the evening. “We thought we would never leave there,” he recalled.

Five months passed before José’s stepmother in Orlando could secure the $15,000 for his bond and an immigration attorney. She had to take out a second mortgage. During that time, José was transferred to four different facilities, including cells in correctional centers in Tennessee, Mississippi and Louisiana. 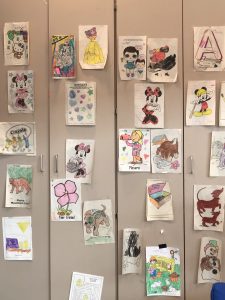 When José finally arrived in Orlando in late October 2019, he was relieved. Friends told him about Catholic Charities of Central Florida (CCCF). Caseworker Monica Araujo of Comprehensive Refugee Services, immediately stepped in. Araujo is from Peru. “Being an immigrant with no family, facing obstacles and emergencies on my own, gave me the strength to move forward and have hope that the changes we make in life are worth it,” she said. She believes that, “As long we have empathy, compassion, and rapport with our clients, we can make a difference in someone’s life.”

Marta remains in a detention center near Houston where she desperately awaits the chance to petition for asylum. The stress is making her lose weight, hair and hope. “She cries all the time,” said José. He deposits money into an account just so she has access to the public phone. He added, “She is an educated person who wants to contribute to this country. She will learn, study and work. She is not a criminal.” According to the most recent statistics from the Migration Policy Institute, 12 million young, college-educated immigrants, just like Marta, arrived in 2017.

José is doing his best to remain positive. Catholic Charities, which helped 500 asylum seekers in 2017, is helping him learn English and study for his driver’s license exam. He can only hope his asylum request is granted soon, so he can get a job. The process is delayed because he had to transfer his case from Louisiana to Florida. He’s already waited more than three months. The little free time he has is spent on odd jobs around the house – cleaning, painting, anything so he doesn’t feel like he’s burdening his family. 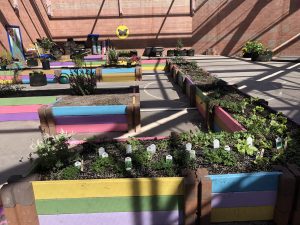 While some are trying to get as far from the border as possible, others are flocking there to help their sisters and brothers in Christ. Dominican Sister of Adrian Sister Lucy Vazquez, tribunal defender of the bond for the Diocese of Orlando, is one of them. In her 70s, she spent a week ministering to asylum seekers last fall. She joined Catholic Charities volunteers in Tucson, AZ at the immigration welcome center, Casa Alitas or House with Wings. “The words of Jesus, ‘when I was a stranger you welcomed me,’ ring loud and clear at Casa Alitas,” said Sister Vazquez.

On average, 30 people arrive on the doorstep daily, but that number can quickly inflate to 100 or more. Hungry guests are greeted with a warm cup of soup, fruit and some water. The team is on a mission to transition guests from border patrol detention centers to sponsors—usually other family members residing in the U.S.

The facility is a testament to the human spirit, run solely on donations and volunteer commitment, with no federal funding. “This speaks to the foundation of how we are raised as Catholics, Christians,” says the director of Casa Alitas, Teresa Cavendish. “It’s Matthew 25; it’s the Beatitudes; it’s everything we are called to do at its foundational level … we all agree these folks have been granted God-given dignity.” Her words are fortified by the U.S. bishops who acknowledge, “A rich body of Church teaching, including papal encyclicals, bishops’ statements and pastoral letters, has consistently reinforced our moral obligation to treat the stranger as we would treat Christ himself.” 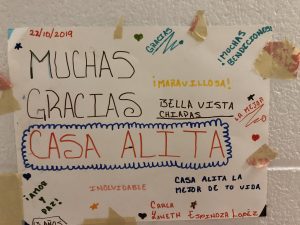 Casa Alitas has welcomed 18,000 immigrants since October 2018. “It began as a group of lay people who would go to the bus station to greet mothers and children who had come across the border, were processed by ICE (U.S. Immigration and Customs Enforcement) and dropped off,” explained Sister Vazquez. “This group of people began feeding them, taking them into their homes, and finally opened a small house as a transitional place to get them to their relatives.” Then Catholic Community Services stepped in.

Because there is no stove, volunteers cook at home. Another team washes laundry; others distribute clothes, shoes and jackets to those in need. A former immigrant, now doctor, offers medical evaluations.

“There are countless lessons,” notes Sister Vazquez. “One has but one chance, one fleeting moment to love these guests, who are truly God’s little ones.” During her stay she translated, assisted with medical intake, prepared food, sorted clothing, fed and briefed families from Honduras, Cuba, Venezuela and more. She even bought a cake to help a 16-year-old young man celebrate his birthday. An immigrant herself, she has a heart for their plight.

Among those Sister Vazquez served was a family from Mexico. Their eyes burned because the detention center was so crowded; they slept standing up. They had not rested in three days. “Some version of this story is what you hear from each family, and it amazes me that they have no anger or bitterness, just gratitude and hope, and of course, still a dose of fear, fear of being deported,” she remarked. 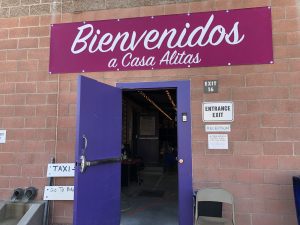 José and his wife also shared this experience. At age 29, José says, “I am no longer the same person I was when I began this journey. The ordeal has messed with my head. I’m not cheerful or fun. I have a hard time laughing. They have taken it from me. Knowing all that my wife is still going through has me very sad and disheartened.”

He is grateful for the kindness and assistance of Catholic Charities of Central Florida. He studied accounting and finance in Cuba and hopes to one day finish his degree. “I never stop asking God to spare us these injustices. I know He has something else prepared for us. I do believe that God has a purpose for us.” Of the others he met along the way, similar to those in Casa Alitas, he said, “There are many good people in those camps and I left with many friends.”

Sister Vazquez also keeps the people she met close to her heart. She returned to Orlando comforted by the thought that others would take her place and be Christ to the community. “Our lives intersect with theirs and that brief intersection, that moment in time, changes us and them,” she said. “I truly believe the world is better because of it.”

By Glenda Meekins of the Florida Catholic January 22, 2020