Catholic Days at the Capitol 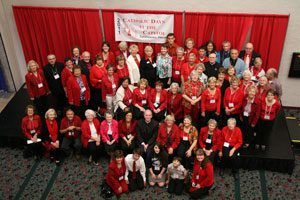 Sixty people from the Diocese of Orlando traveled to Tallahassee last week during Catholic Days at the Capitol to advocate for just social policies on behalf of the Florida Catholic Conference. The Office of Advocacy and Justice organized the Orlando contingency and this was the largest group ever to travel to Tallahassee for this annual event and the largest of any Florida Diocese in 2011.

Among the issues supported were the Constitutional Amendment on Abortion, the McKay Scholarship, the Religious Freedom Act, and the Sentencing of Capitol Felonies. You can read more about these bills and follow their progress at the Florida Catholic Conference.