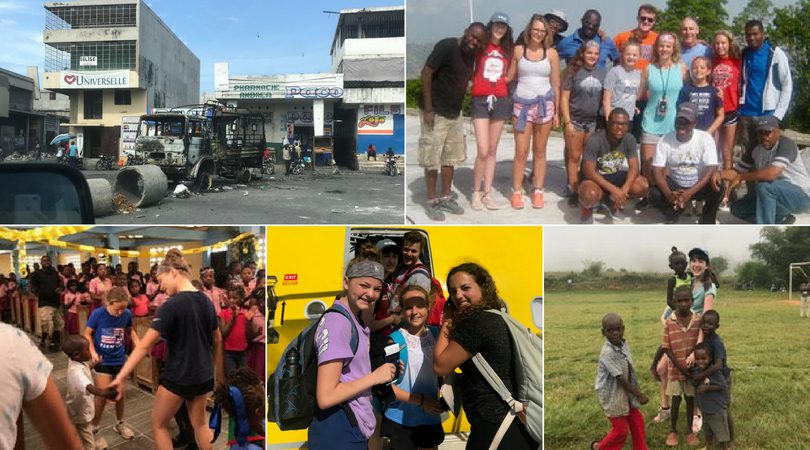 They are exhausted, hot, and homesick, but 11 missionaries from Holy Name of Jesus Parish caught in the middle of dangerous riots in Haiti are safe. Half of them are already back in Brevard County, the other half return July 12th. The entire team had hoped to catch a flight back to Florida last weekend, but violence in the capital city of Port Au Prince made that impossible.

The teenagers and adults are part of the “Hearts out to Haiti” program. They arrived June 30th to conduct Vacation Bible School in both English and Creole for more than 1,300 children in remote mountain communities some 50 miles outside of Port au Prince. It’s a journey that takes 5 hours by car.

Mission leader, Tim Muth, says the team heard about the Haitian gas tax increase and potential violence on Friday July 6th. When they woke up the next morning, the danger became real. “Our interpreters said we had to leave immediately if we wanted to make it to Port au Prince,” shared Muth. As soon as the team approached the first big city, other drivers alerted them to roadblocks ahead. A priest made some calls and secured shelter for the group at a nearby Catholic church. “I didn’t realize how serious the riots were at first,” explained Muth. “However, I have been in Haiti enough to know it is unsafe to be anywhere near them. They can easily spin out of control.”

As the team huddled together in the church, facts became hard to obtain. Power was in short supply, but prayer plentiful. When they could, they would connect to social media to let family and friends know they were okay. Missionary and mother, Margi Ruiz, had some concerns, but never felt unsafe. She began taking her children to Haiti to serve nearly a decade ago. “I had total trust that God would see us through,” Ruiz shared confidently. “He gave me an unbelievable peace throughout the whole adventure.”

Muth eventually reached the U.S. Embassy for real updates on local conditions. “We felt it was too unsafe to travel on Sunday and Monday morning,” he said. “While the situation still wasn’t clear Monday afternoon, we knew a few cars from our area had made it to Port au Prince. So we asked the priest to bless us and we left.”

The destruction quickly became visible on the journey down the main highway… burning cars and stores, toppled trees, tires and rocks thrown onto key roads to keep people away. The drivers even had to pay a “toll” to armed, masked men to finally make their way into the city to try and catch a plane.

Despite the scary moments, the entire team says they will return to minister to those in need. “We saw the goodness of the Haitian people as they took us in without reservation and generously shared with us their limited food and water,” said Muth. “We are very proud of the work we do and appreciate the tough conditions our friends live in every day. We learned about faith, sacrifice, hope, gratitude, and love.”

Ruiz echoed those sentiments. “It is really important to us that our four children develop a heart of service.  And also to learn firsthand that to whom much is given, much is expected, and they have been given a lot! I am amazed by the pure joy in their hearts and faces as they served others.”