Catholics join Christian leaders in A Walk of Mourning and Restoration 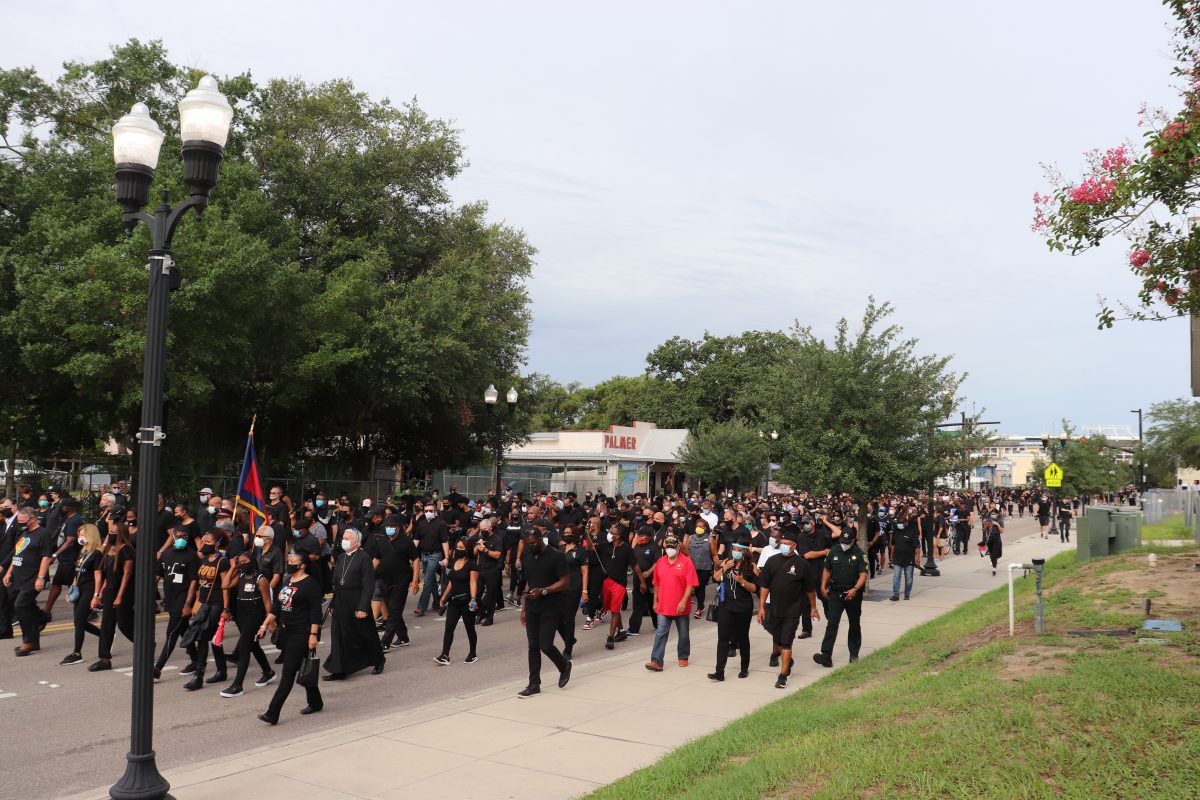 ORLANDO | A sea of people dressed in black moved slowly and deliberately down Church Street in Orlando, June 5, as hundreds of people mourn George Floyd, an African American who died while in police custody in Minnesota on Memorial Day. The crowd remembered not only Floyd, but hundreds of others who died unjustly before him. It was the 10th day of public expressions of outrage over Floyd’s death, but this was different. This was “A Walk for Mourning and Restoration”, called for by Christian leaders to help promote healing through prayer.

As the massive crowd walked beneath gray skies, verses of Scripture interspersed with the names of 100  of the 400 lives lost due to racism since 2014, echoed through the air. The walk began at Camping World Stadium and continued for one mile to Division Avenue, on the edge of the Parramore district. 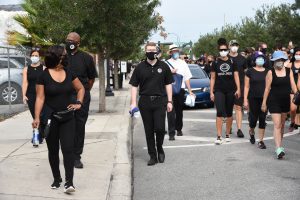 Although only able to attend briefly, Bishop John Noonan told the Florida Catholic, “As a religious leader, it is my duty to offer my support to Pastor Tim Johnson as he gathers all the religious leaders of Orlando to pray. As he said ‘a time to weep, a time to mourn and a time to heal.’ St. Paul reminds us; when one member of the body of Christ suffers, we all suffer because we are one Body. Black men and women are suffering right now in our communities because of the loss of respect for all human life.”

Recalling Pope Francis’s words to his General Audience just days earlier, Bishop Noonan noted the pontiff’s “’great concern’ at ‘the disturbing social unrest’ in the United States following ‘the tragic death of George Floyd,’ which he attributed to ‘the sin of racism,’” noted the bishop. Echoing the Pope’s words, he affirmed, “We cannot tolerate or turn a blind eye to racism and exclusion in any form and yet claim to defend the sacredness of every human life.” 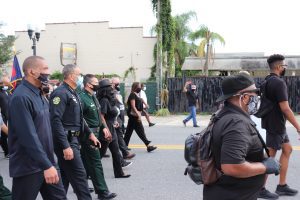 Bishop Noonan said, “Today, I join the Church in Saint Paul and Minneapolis, and in the entire United States, in praying for the repose of the soul of George Floyd and of all those others who have lost their lives as a result of the sin of racism.” He added, “Today, I ask all Catholics to join me with our black brothers and sisters in praying.”

“We read the headlines that report the killing of unarmed African Americans by law enforcement officials,” reads the United States Conference of Catholic Bishops’ pastoral letter, Open Wide Our Hearts, from 2018. It could easily be a headline from the day the video of Floyd’s death went viral. “So how is it that in 2020, we’re here?” asked Pastor Johnson of Orlando World Outreach Center, who spearheaded the walk. 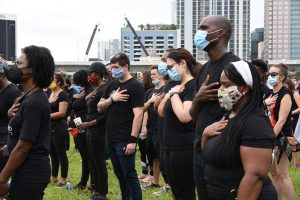 Quoting from Ecclesiastes 3:4, the Protestant pastor said, “There’s a time to weep. There’s a time to mourn. There’s a time to heal. The tragedies we are dealing with in our nation, can’t be healed by us, because they’ve been caused by us…. You have to take it back to the manufacturer. The One who made us and loves us. We have not loved each other like we should… Today, we’re going to love each other because we’re human beings created in the image of an amazing God.”

As the crowd moved forward quietly, so did Father David Scotchie, pastor of Nativity Parish in Longwood, alongside his father, Larry. Father Scotchie said he came, “to pray for peace and unity.” He added, “Thoughts and prayers are not enough and silence is compliance, in a way. So by coming together in a public way to mourn those who have died, we can make a difference—and we’re doing it as people of prayer, trusting in God to change hearts and helping us to follow Christ.” 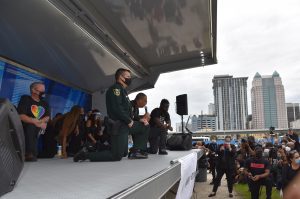 His father, Larry Scotchie, has been a longtime advocate for life. “I was looking for an opportunity to participate in this to show support for all persons who have been abused like this,” he said. “From conception to natural death, we have to respect life. This is where it starts.”

Not far from him was Father Leo Hodges, pastor of St. Andrew Parish in downtown Orlando. He grew up as a military child. Recalling his youth, he said, “Unfortunately my first experience of racism was on the playground of my Catholic grade school. I lived on an Air Force base before that, in Okinawa, and on base no one seemed to care what you looked like or what language your spoke, or the color of your skin.” His experience spoke to the heart of the lamentation portion of the event, where several Christian leaders asked for forgiveness, on behalf of a church often divided and whose life may not always reflect the image of God. 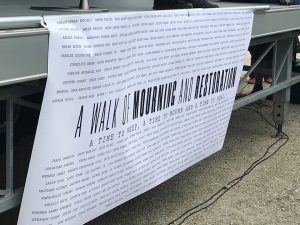 As an African American, “I felt connected – that I was helping the conversation for peace and reconciliation continue. I felt a great sadness over the reckless loss of life and the ongoing racism,” he said. As a priest, he hopes the message conveyed by the event is, “That it is possible to all get along. Catholic does mean universal.” He appreciated that, “Many likeminded folks gathered to move an agenda forward to build the Kingdom of God here in Orlando.”

Missionary of Mercy, Father Anthony Aarons could not attend, but was thankful the event was focused on mourning and restoration. “In the Beatitudes, Jesus says: ‘Blessed are those who mourn for they will be comforted.’ Not only are we mourning the loss of George Floyd’s life, but the total loss of respect for the dignity of every human life,” he said. “The words of Lamentations 3:17 express that loss very well: ‘My life is deprived of peace, I have forgotten what happiness is; my enduring hope, I said has perished before the Lord’. As a Nation, we grieve, but we recall those words of Jesus and they bring us hope. The Lord’s acts of mercy are, renewed each morning (Lam 3:23), so we mourn and we will be comforted – restored!”

The walk ended aptly on a stage just off Division Avenue, a long held demarcation for the separation of ethnic neighborhoods. Pastor Johnson said they chose that spot, “To say that barriers must be broken.”

Speakers from the Christian community addressed the mourners, as did elected officials Mayor Buddy Dyer, Orange County Sheriff John Mina, Commissioner Regina Hill and Orlando Police Chief Orlando Rolón who is also a parishioner at St. James Cathedral. “We need to pray, for our nation to heal during this painful and uncertain time in our lives,” Chief Rolón told the Florida Catholic. “We need to pray, for the lives lost, and their loved ones reeling with their loss. We need to pray, for peace and unity, that we will rise from these challenges together a safer and stronger community.” 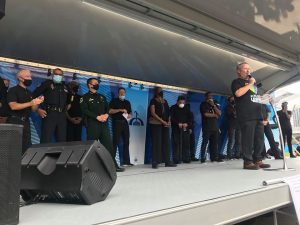 The Catholic civil servant spoke from the heart, without a script, asking those gathered to kneel. He asked for prayers over the leadership of the law enforcement profession and, “For anyone who has ever been at the hands of a situation where an injustice has occurred… We are here to serve you. We are here committed to take a knee for any cause that will end police brutality—anything that will harm a human being…” he said.

His words harkened those of the conference of Catholic bishops in their letter, Open Wide Our Hearts. “As followers of Christ, we seek to reclaim the God-given sanctity of each person’s inviolable human dignity.”

A Walk for Mourning and Restoration served as a reminder of whom we are called to be and offered the hope that it is indeed possible—to love one another and be “our brother’s keeper” (Gn 4:9). Following Pope Francis’ request, “Let us pray for the consolation of their grieving families and friends, and let us implore the national reconciliation and peace for which we yearn.”

By Glenda Meekins of the Florida Catholic, June 5, 2020