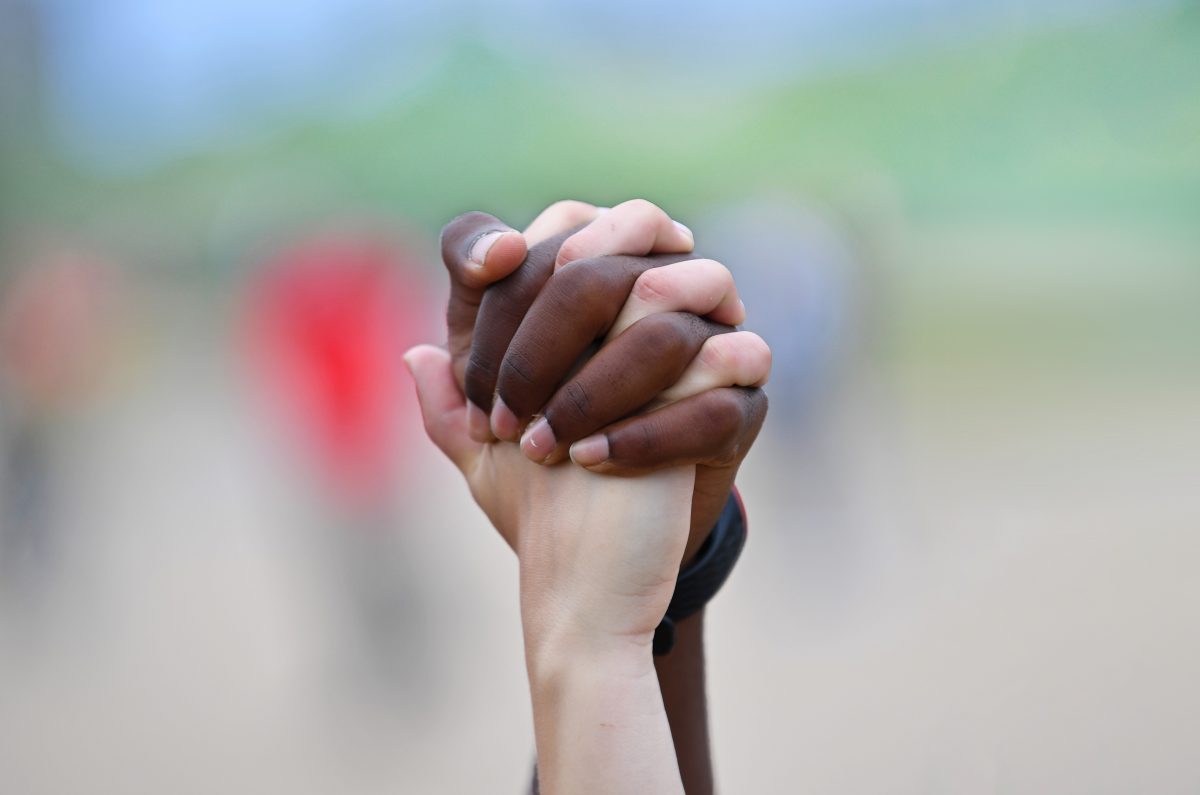 A man and woman hold hands in London’s Hyde Park during a “Black Lives Matter” protest June 3, 2020, following the death of George Floyd, an African American man who was taken into custody by Minneapolis police and later died at a Minneapolis hospital. (CNS photo/Dylan Martinez, Reuters) See RACISM-BRITISH-BISHOPS June 3, 2020.

LONGWOOD | A week after George Floyd’s death at the hands of a police officer, Father David Scotchie took time to reflect and committed himself to a goal.

His goal: to promote a deeper evaluation of racial attitudes in light of the Gospel, even as the subject elicits tensions, including within the Catholic Church.

“Racism is a hot topic that generates more heat than light,” the Nativity Parish pastor said. “As the bishops write, ‘Finally, too often racism comes in the form of the sin of omission, when individuals, communities, and even churches remain silent and fail to act against racial injustice when it is encountered.’”

Father Scotchie was referring to a pastoral letter on racism written two years ago and developed by the U.S. Conference of Catholic Bishops. His own reflections evolved into a group that gathered at the parish to study “Open Wide Our Hearts: The Enduring Call to Love.” “The aim was to understand the bishops’ teaching so that we bring the light of the Gospel to this issue,” said Father Scotchie. “The study groups were one way to pray, listen, study, reflect, and respond to God’s invitation to open wide our hearts.”

Four groups with a total of 24 people began the weighty, emotional trek through the bishops’ letter in mid-July. It was a trek because, though only four weeks long, moving through Open Wide Our Hearts was an arduous task of exploration, discovery and humility. Following the example charted in the pastoral letter, participants shared their experiences or lack thereof. Often with sadness, regret and tears of compassion, they began to sift through past and ongoing experiences of discrimination – trying to view them through a different lens, that of the body of Christ.

The conversations were not easy for everyone. Due to the sensitivity of the topic, several people declined to be interviewed – crystalizing the personal risk a statement or position implies. Agreeing with the bishops that there is value in sharing stories that shed light on the issue, one Black woman spoke, but chose to remain anonymous. Some of her frustration dealt with stereotypes and tropes offered by the media and by individuals and organizations concerning “the Black community.”

“I don’t think people are seeing the full scope of what they call the Black community,” she said. The “Black community” defined by outsiders didn’t reveal her reality, and that was disheartening. She urged people to move beyond stereotypes that serve to do nothing except limit a person’s ability to love. She did experience colorism when she grew up, such as myths regarding how the color of a person’s skin correlated to a person’s misbehavior. And she knew she would never appear as Mary in a Christmas play. That role always went to girls who had more of a light complexion.

“Getting to know people brings down the walls,” she said. “The stereotypes and the tropes are really hurtful because you really miss out when you don’t get to know a person and just assume something about them.”

A discussion on the Church’s own struggles with racism noted that, often Black women were denied final vows to religious orders, or were simply referred to religious orders made up of solely Black women. “How can we really love God if we can’t love each other?” she asked her group. She likened it to a beautiful banquet table. We are not sitting at the table, but looking through a window “with a bag of half stale chips… It’s hard to love God and reject His creation.”

The events of recent months have introduced a fear she never experienced before. She fears for her life. She fears driving because she thinks about what might happen if she doesn’t use her turn signal. “I’m terrified,” she said. “I never imagined that I would be living in times feeling the way I do now. I used to wonder, ‘How did people feel in the 1960s?… Right now, I mostly fear for my life.”

Open Wide Our Hearts brought her hope and she felt the discussions were fruitful. Studying the bishops’ letter “acknowledges the things we see happening in the world,” she said, adding the letter honestly addresses the situations, events and circumstances that occurred, even when they were not justified.

“What I like is that (the letter) brings to it, that it is sin and we’re all a part of sin; and the idea of approaching it with love is the only way to correct it,” she said. Pointing to Christ, being love itself, she emphasized that he teaches us to forgive, and she looked to Scripture for further guidance. “(St.) Paul is saying, you have to change your mind. You have to change your way of thinking – to embrace a way of life that is not of this world.”

Father Scotchie facilitated the men’s group and extended personal invitations. Dennis Buhring joined four others whom he had never met on those warm, sometimes hot, Thursday nights, sitting outside — while socially distanced. He showed up because his pastor asked him to come and admitted being surprised by the topic. “It was something that I have not been very exposed to. I’ve led a charmed life,” he acknowledged. “God works in strange ways. It was really eye opening.”

The 70-year-old CEO, who works more than 55 hours per week, found the homework “challenging,” but the readings provocative and inspiring. He said the study made him “much more aware of the problems.” He found particularly convicting the section “Prophetic Witnesses Against Racism.” It includes resources that outlined several men and women who fought against racism within and outside the Church at great personal sacrifice, such as Servant of God Sister Julia Greely and Venerable Father Augustine Tolton.

“I felt so small against what these giants were doing,” he recalled. “When we all meet our maker and we’re all judged, and you take a look at what these people did versus what I’m doing. It was an eye opener.”

The men shared their vastly different encounters with racism. Buhring was extremely moved by the “the transparency and the honesty” the other men shared. He recalled how one participant recalled growing up a few blocks from a reservation near Minneapolis. “In my little world, I’d never seen anything like that,” Buhring said. “And it hurt.”

Buhring was middle-aged during the Civil Rights Movement, and recalled watching on television as Martin Luther King Jr., accompanied by hundreds, walked across the Edmund Pettus Bridge in Selma, Alabama. The bridge was named after a former Confederate brigadier general, who was also a U.S. senator and leader of the Alabama Ku Klux Klan. Buhring admitted he would shut off the television and “go back to life.” At the time he believed it was enough to watch it. He was sympathetic, even empathetic of the pursuit of civil rights, but in reality his fervor — like that of many others — ended there. The Open Wide Our Hearts study group has spurred Buhring to do more.

“Now, I try to make sure in my workplace that all the policies are fair for everybody,” he said. “I’m advocating equality for all people. I am more focused on what I can do to help.” Even his dinner table conversations with his family are changing. He especially tries to talk to his seven grandchildren about racism and social justice. He realized, “I can have a positive impact in their lives.”

Open Wide Our Hearts: The Enduring Call to Love and its study guide are available for free at usccb.org.

To listen to a podcast, read articles and obtain resources on overcoming racism, go to https://www.orlandodiocese.org/overcoming-racism/.

Celebration of Juneteenth
This year, Juneteenth — June 19, which commemorates the emancipation of those enslaved in the United States — coincided with the Solemnity of the Most Sacred Heart of Jesus. In that week’s reflection, prior to the study, Father David Scotchie quoted Martin Luther King Jr., “Now, we’ve got to get this thing right. What is needed is a realization that power without love is reckless and abusive, and love without power is sentimental and anemic.”

His hope was that the study of “Open Wide Our Hearts” would turn inert anemia to dynamic action. Father Scotchie went on to unpack the statement — “Power without love, on the one hand, is brutality… Love without power, on the other hand, is sentimentality.”

In a statement, Bishop John Noonan reflected on how “our minds and hearts are full with much trial and tribulation” in the past few months, and how “we are seeking guidance.”

“Like St. Dominic when he met St. Francis of Assisi, he said, ‘You are my earthly companion and must walk with me,’” the bishop wrote. “The message for us today, we need the simplicity and poverty of heart and mind in order to follow Christ’s command ‘to love one another, as I have loved you.’ Open Wide Our Hearts is inviting us to reflect, to grow in order to imitate Christ and His command to love, not as we think we can, but by imitating Christ.”

By Glenda Meekins of the Florida Catholic, August 12, 2020