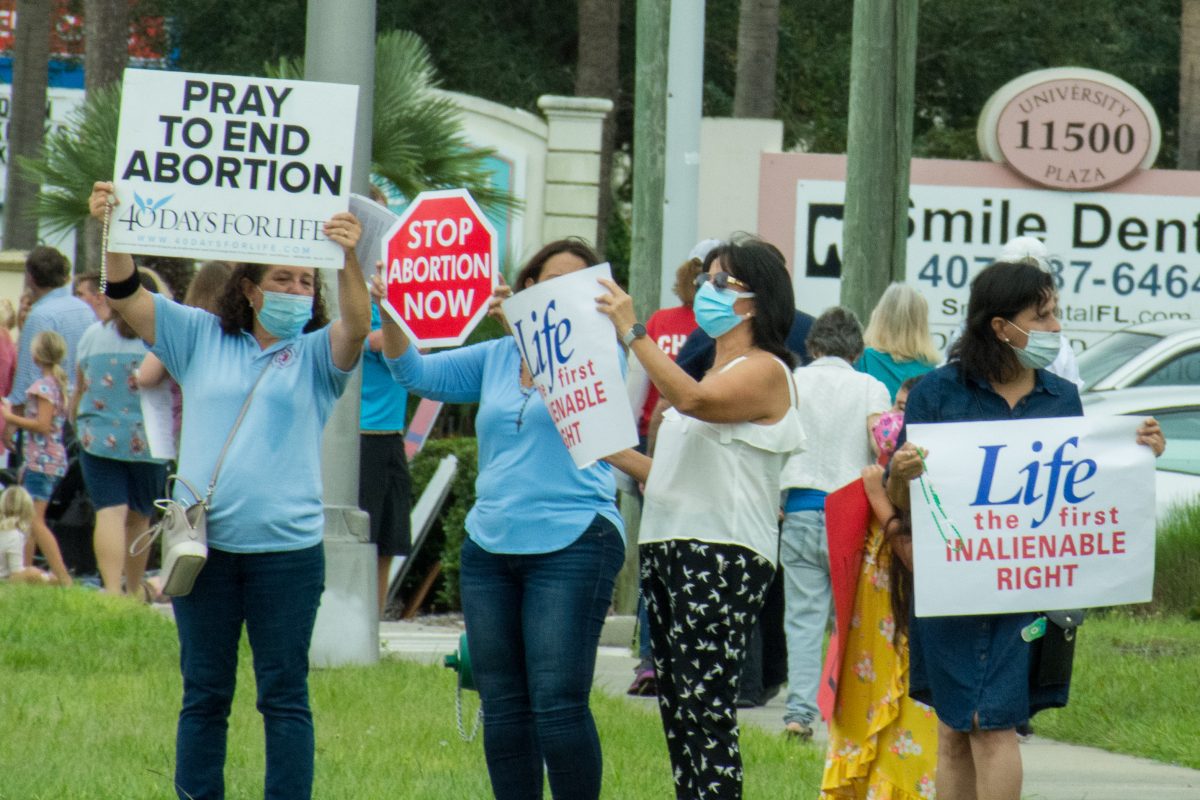 ORLANDO | More than 60 defenders of life stood for two hours along a quarter mile on University Blvd. near the University of Central Florida (UCF). In its 33rd year, people could be seen holding signs, some sang, and others spoke to someone who pulled up and inquired about the event. The occasion united people of many faiths, hoping to raise awareness and bring the issue to the forefront of conversation and conscience.

Kathy Guard has a long history with Life Chain, which occurs during 40 Days for Life. This Oct. 4 event was one of many she attended for more than a decade. “My mother was a pro-life advocate in the 70s,” she explained. Guard followed in her footsteps, opening what is now Life Choices Medical Clinic in Altamonte Springs with four other women in 2007. On this day, she joined fellow advocates in front of Planned Parenthood on University Blvd., less than a half mile from UCF.

“Life Chain’s is all about raising the consciousness of the drivers by,” says Guard. She explains, for the Christians driving by who are not really thinking about it, Life Chain hopes to promote awareness and involvement. “For those who are pro-choice, to plant seeds that God can cultivate in His time, in His own way……” Of course, prayer is a key element—not just for the babies and their families, but for staff at abortion clinics to have a change of heart.

Her own thought: “Legal abortion is not going to come to an end until contraceptive mentality in our country comes to an end because they are two sides of the same coin. The contraception mentality leads to the ‘need’ for abortion.” She prays each day “that truth will be awakened in all people, starting with Catholics and Christians.”

Her words harken to Pope Paul VI’s encyclical Humanae Vitae (Of Human Life), written in 1968. She points out, “Everything he said has come to be.” At the time, many found the encyclical controversial. He predicted use of contraception would increase single parent households, divorce, and increase abortions. “It was prophetic,” she said. “And just like throughout all salvation history, we don’t listen to our prophets… We throw stones at them; we laugh at them; we ignore them.”

But this group was hard to ignore. One woman drove by and honked, then decided to turn around and stand alongside the advocates. Expecting her fourth child, she hopes to join future events.

Ingrid Pedraza helped organize her group from Holy Cross Parish in Orlando. The group has been throughout central Florida over the years, representing the unborn. “We are here all in communion, helping one another—helping our neighbor,” she said.

Joining her was Jacqueline Rodriguez. She’s been coming for seven years. “In my youth I did something like this,” she said. “I was very young. After I did it, it affected me a great deal. I looked for a long time for something like this and I found it.” Rodriguez explained, “I felt I was freed from what I felt over what I had done then. That is why I will always defend the babies.” For her, it is a type of personal reconciliation – a way of making amends. “One does not heal, but we work toward it. For me, this is doing something. God knows my heart.” She acknowledged it was fear of what family or others might think of her and the fact that she would be raising a child alone that led her to the fateful decision. “Fear is the greatest reason why people make these mistakes. Your head starts filling up with thoughts that lead to desperation. I want to help others not be afraid.”

By Glenda Meekins of the Florida Catholic, October 8, 2020