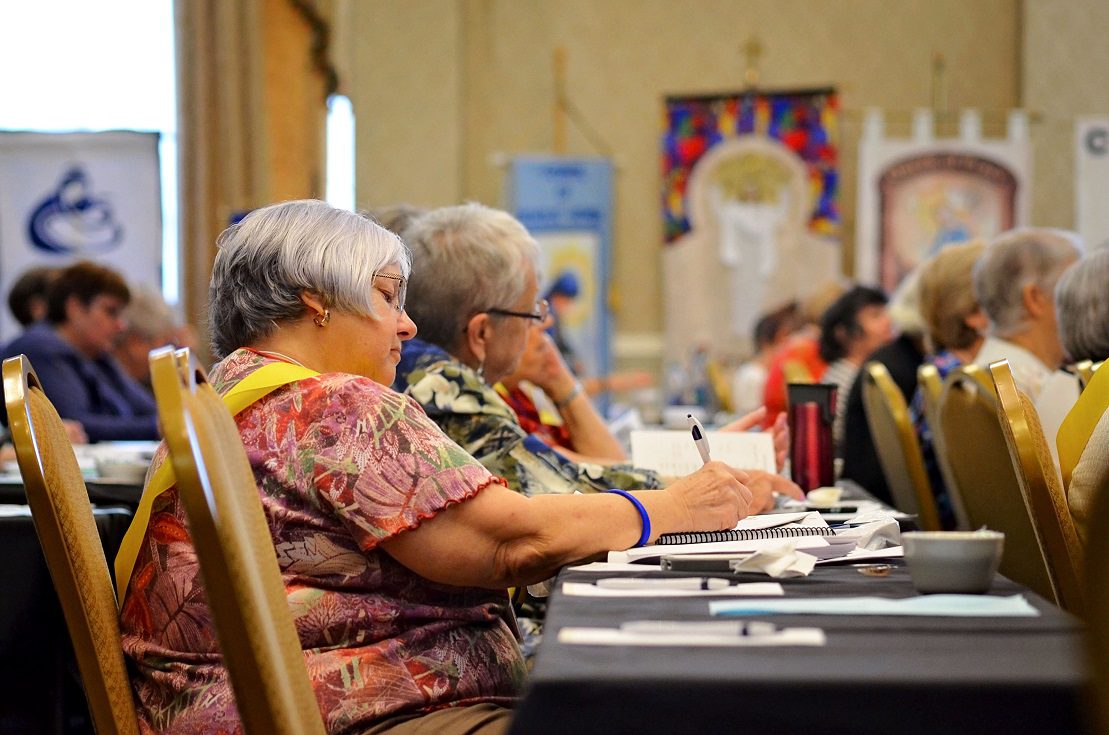 MELBOURNE | “Who is God calling you to be in this moment, today, here at this ODCCW (Orlando Diocesan Council of Catholic Women) convention?” challenged Mary Matheus, PODCCW president in her opening address, “God is calling us to serve.”

The 49th annual convention held at the Daytona Beach Plaza Resort and Spa April 21-24 focused on merciful leadership and 150 women from throughout the diocese responded to the call.

“’Every moment of our life has a purpose,’” Matheus continued, citing Jesuit Father Walter Ciszek from his book, He Leadeth Me. “’Every action of ours, no matter how dull or routine or trivial it may seem in itself, has a dignity and a worth beyond human understanding.’”

It was a fitting introduction to guest speaker, Katariina Rosenblatt, Ph.D. who as a young girl in South Florida was a victim of human trafficking from ages 13-17. Her story was chilling.

“I had to live human trafficking in order to share it with you,” Rosenblatt said, “but at the end of the day, there is hope for its victims.”

Rosenblatt is an expert witness, working with all levels of government and law enforcement agencies and teaches courses on human trafficking and domestic violence. She has founded a survivor outreach and mentoring program – There is H.O.P.E. for Me and with her daughter, Diane is a frequent speaker at middle and high schools where trafficking efforts are focused. She provided the horrific statistics of 1 in 3 middle school students and 1 in 9 high school students are victims of human trafficking.

“I have two grandchildren in public schools,” said Rose Occhipinti from St. Vincent de Paul Parish in Wildwood. “This is scary. It really hit home, but I’m also impressed with how many of our members are passionate about doing something, getting involved. People don’t realize their strength until they come and see and say, ‘I can do this.’”

Gary Tester has been the executive director of Catholic Charities of Central Florida since 2015 and shared the agency’s expanded efforts to reach those in need in the communities.

“People often come to us as the last ray of hope,” Tester said. “We need to understand what it means to be poor, to be food insecure. Our mission is to embrace those in need with hope, transforming their lives through faith, compassion and service.”

Tester was presented with checks from the Councils’ Hugs for the Homeless campaign; the collection from the opening Mass and the table centerpieces – baskets filled with hygiene items earmarked for homeless individuals – prepared by Council women of Prince of Peace Parish in Ormond Beach.

Guest speaker Jane Carter is an NCCW board member, founder of the National Council of Catholic Women (NCCW) Leadership Development Program and coordinator of the NCCW Million Works of Mercy initiative presented to Pope Francis in early April. She explained the elements of servant leadership exemplified by Jesus – our most perfect model.

The Council of Catholic Women have been longtime supporters of vocations and the diocesan seminarians. In addition to the presentations on service and social justice, convention participants also heard from the ODCCW spiritual advisor, Father Miguel Gonzalez on the importance of planting seeds for religious life in the young, from seminarian Derek Saldhana on the role of the Eucharist in his vocation, and they attended a presentation titled, “Getting to  Know Your Seminarians”.”

Bishop John Noonan culminated the event celebrating Mass and speaking at the banquet.

“You do so much good. You do so much to help create our community of faith,” Bishop Noonan said. “As we prepare to celebrate our 50th anniversary as a diocese, the story I hear is what the Council of Catholic Women did to begin our parishes and schools. We have a lot to be proud of, but a lot of work to do. We are the hands and feet of Jesus Christ. We must let our people hear and see.”