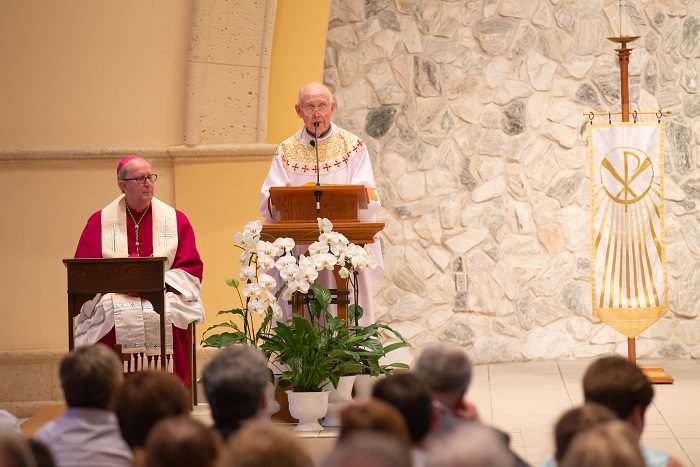 Not many priests are able to celebrate 60 years of priesthood, but on Saturday, May 26th Monsignor David Patrick Page did just that. Bishop John Noonan celebrated Mass and the memorable anniversary at his parish, Holy Name of Jesus, Indialantic.

An estimated 300 guests attended a reception with dinner, video and entertainment. Friends and family flew in from Ireland. Deacons and priests from throughout the diocese and as far as North Dakota also honored Monsignor Page.

Monsignor Page was born in a rural past of west Ireland, the second youngest of 8 children. He was ordained June 8, 1958 and arrived in Florida before the Diocese of Orlando even existed. “Never regretted that decision to come to Florida,” he remembered. “And when I did come about 40% of the priests here at that time were Irish born and many of them pastors.”

Serving from St. Petersburg to Jacksonville, Monsignor Page worked as a teacher and pastor, vice-president of Father Lopez High School in Daytona Beach, and founded Epiphany Parish, Port Orange. He also served at St. Mary Magdalen Parish, Altamonte Springs and St. James Cathedral, Orlando. “In every parish I went to I was sort of known a bender,” he recounted. “I have a tendency never to sort of accept things as they are. If there’s a need somewhere, I feel it should be fulfilled. So that made life very busy for me – a lot of fundraising, a lot of building.”

Monsignor Page was also executive editor of the Florida Catholic from 1965-1990. For several years, it was the newspaper for Miami and most other dioceses across the state with a circulation of 160,000.

His parishioners thank him for his high level of energy, pastoral care, evangelization, organizational skills and the many ministries he inspired. Monsignor Page also feels strongly for his flock. “There’s something good happening in the church today,” he said. “Younger people are much more interested in their faith than they have been in the past.  I wouldn’t change being a priest for anything. The longer I live, the more I’m convinced it’s a tremendous blessing.”