Celebration of the Pope’s Sixty Years as a Priest

On the Solemnity of Sts. Peter and Paul, Apostles, Pope Benedict XVI celebrated the Eucharist in the Vatican Basilica on the sixtieth anniversary of his ordination to the priesthood. Concelebrating with the Holy Father were forty new metropolitan archbishops, upon whom he imposed the pallium.

The Pope began his homily by recalling the words of Jesus which Cardinal Faulhaber had addressed to him and other newly-ordained priests sixty years ago: “‘Non iam dicam servos, sed amico’ – I no longer call you servants, but friends”. 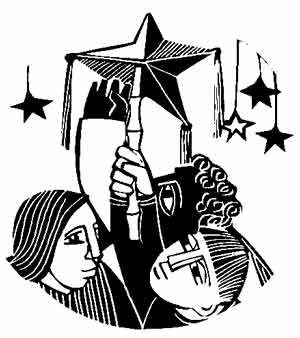 On the Solemnity of Sts. Peter and Paul, Apostles, Pope Benedict XVI celebrated the Eucharist in the Vatican Basilica on the sixtieth anniversary of his ordination to the priesthood. Concelebrating with the Holy Father were forty new metropolitan archbishops, upon whom he imposed the pallium.

The Pope began his homily by recalling the words of Jesus which Cardinal Faulhaber had addressed to him and other newly-ordained priests sixty years ago: “‘Non iam dicam servos, sed amico’ – I no longer call you servants, but friends”.

“He calls me His friend. … He grants me the almost frightening faculty to do what only He, the Son of God, can legitimately say and do: I forgive you your sins. … He entrusts to me the words of consecration in the Eucharist. He trusts me to proclaim His word, to explain it aright and to bring it to the people of today. He entrusts Himself to me”.

Benedict XVI explained how the phrase “‘No longer servants, but friends’ … contains within itself the entire programme of a priestly life. … The friendship that He bestows upon me can only mean that I too try to know Him better; that in the Scriptures, in the Sacraments, in prayer, in the communion of saints, in the people who come to me, sent by Him, I try to come to know the Lord Himself more and more. … In friendship, my will grows together with His will, and His will becomes mine: this is how I become truly myself”.

“Jesus’ words on friendship should be seen in the context of the discourse on the vine”, said the Pope. “The Lord associates the image of the vine with a commission to the disciples: ‘I appointed you that you should go out and bear fruit, and that your fruit should abide’. … The Lord challenges us to move beyond the boundaries of our own world and to bring the Gospel to the world of others, so that it pervades everything and hence the world is opened up for God’s kingdom”.

“After the reference to setting out, Jesus continues: bear fruit, fruit that abides. What fruit does He expect from us? What is this fruit that abides? Now, the fruit of the vine is the grape, and it is from the grape that wine is made. … Is this not already an image of human life, and especially of our lives as priests?” the Pope asked. “We need both sun and rain, festivity and adversity, times of purification and testing, as well as times of joyful journeying with the Gospel. In hindsight we can thank God for both: for the challenges and the joys, for the dark times and the glad times. In both, we can recognise the constant presence of His love, which unfailingly supports and sustains us”.

The Holy Father went on to ask: “What sort of fruit does the Lord expect from us? Wine is an image of love: this is the true fruit that abides, the fruit that God wants from us. … At a deep level, the essence of love, the essence of genuine fruit, coincides with the idea of setting out, going towards: it means self-abandonment, self-giving, it bears within itself the sign of the cross”.

The Pope then addressed a greeting to the delegation sent by Ecumenical Patriarch Bartholomew I, thanking them “for their visit on the joyful occasion of the feast of the holy Apostles and patrons of Rome”.

Turning then to the archbishops upon whom he was about to impose the pallium, he reminded them that this woollen band “reminds us of the Shepherd Who Himself became a lamb, out of love for us. … It reminds us of Him Who took the lamb – humanity – me – upon His shoulders, in order to carry me home. It thus reminds us that we too, as shepherds in His service, are to carry others with us, taking them as it were upon our shoulders and bringing them to Christ. It reminds us that we are called to be shepherds of His flock, which always remains His and does not become ours. Finally the pallium also means quite concretely the communion of the shepherds of the Church with Peter and with his successors – it means that we must be shepherds for unity and in unity, and that it is only in the unity represented by Peter that we truly lead people to Christ”.

Benedict XVI concluded his homily by returning to reflect on his ordination sixty years ago, saying “I feel prompted at this moment to look back upon the things that have left their mark on the last six decades. I feel prompted to address to you, to all priests and bishops and to the faithful of the Church, a word of hope and encouragement; a word that has matured in long experience of how good the Lord is. Above all, though, it is a time of thanksgiving: thanks to the Lord for the friendship that He has bestowed upon me and that He wishes to bestow upon us all. Thanks to the people who have formed and accompanied me. And all this includes the prayer that the Lord will one day welcome us in His goodness and invite us to contemplate His joy. Amen”.