Chaplains serve those who sacrifice for country 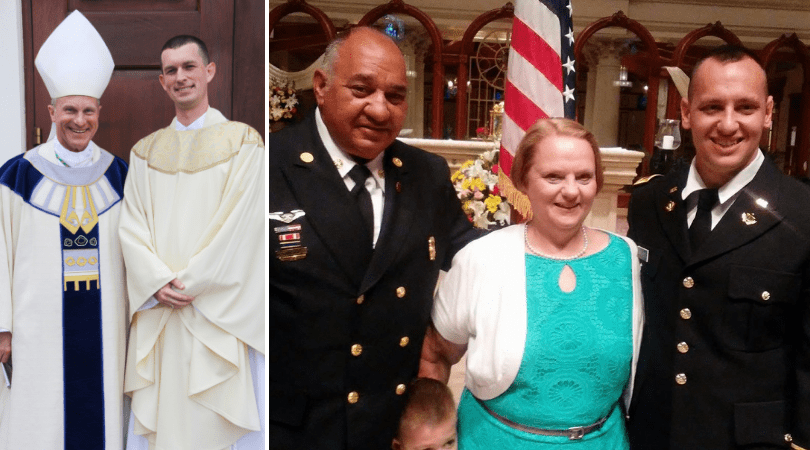 ORLANDO  |  Growing up while his father served in the U.S. Air Force, Father Chris Dorsey was always around military bases.

“A lot of times, the chapel on base was where we would go to Mass on Sundays,” he recalled. “It was just part of my faith growing up, seeing (chaplains), not just how they ministered to those in the military, but to their families as well.”

From May 2015 until May 2019, Father Dorsey served at Holy Redeemer and St. Rose of Lima Parishes, both in Kissimmee, and then moved to St. James Cathedral in Orlando. Starting June 4, Father Dorsey will begin his three-year tour as an active-duty Army chaplain at Fort Leonard Wood Army Base in Missouri. Father Dorsey recalled how chaplains on the base helped him form his own faith. And now he can pay it forward to members of the military and their families through his ministry as a priest.

“I think it was always part of my call to the priesthood. God graced me with the abilities to live that lifestyle and have the physicality that’s needed for it,” Father Dorsey said. “It’s very much a time when people need the Lord and get him the least, especially the Army. For the most part, they are 18 to 25-year-olds who are not only dealing with what every 18 to 25-year-old is dealing with, which is enough, but also separation from family and everything that’s going on as well as people attacking them and the high stress aspects of that job. They really need the church in those moments and the Sacraments.”

According to the Archdiocese for the Military Services, Catholics comprise an estimated 25% of the military. That includes roughly 1.8 million Catholics were served by military chaplains, not counting the many servicemen and women of other faiths who turn to these chaplains for guidance while on tours of duty and their families who endure loss and long terms of separation from loved ones.

Despite those numbers, the military archdiocese (which was formed in 1985) states that roughly 200 priests worldwide serve that community.

Bishop John Noonan of the Diocese of Orlando recognizes the urgency. Currently, there are 48 co-sponsored seminarians from 35 dioceses (of the 196 U.S. dioceses) studying to become chaplains. The Orlando Diocese’s Transitional Deacon Adam Marchese is among those seminarians, and will attend his three-month Chaplain Basic Officer Leadership Course starting May 30.

While Bishop Noonan reflected how no diocese has enough priests to serve the Church, smaller dioceses cannot afford to co-sponsor a priest who serves elsewhere as a chaplain. But as a larger diocese, the bishop said it is a “privilege to give one or two priests to the military.”

“It’s only right that we share some of our younger priests,” Bishop Noonan added. “It’s a very different assignment—working with civilians and military people in all different areas and aspects of life. Some are in very dangerous and critical areas of the world. Yet it is important that the presence be there.”

While not generally on the front lines of combat, there have been many Purple Hearts awarded to Catholic chaplains over the years. Despite being non-combatants, Catholic chaplains are “willing to go to those most in need of spiritual help,” Bishop Noonan said, and the diocese is “blessed” to have two men serve those in the Armed Service.

Before being ordained as a priest in 2020, Deacon Marchese looks forward to attending the chaplain leadership course. Both of Deacon Marchese’s grandfathers were in the military, along with several cousins and friends with whom he served in Junior Reserve Officer’s Training Corps (JROTC) in high school. Discovering the chaplaincy and the opportunity to be a military chaplain helped him give his fiat to the Lord.

“That’s when I went from ‘I don’t know’ to ‘wow!’ That’s what the Lord is calling me to,” Deacon Marchese said. And while there is excitement about the chaplaincy, the future priest is aware of the difficulties of the ministry. “Here in the United States, if a Catholic needs Mass, Confession or anything, there is a parish, most likely within a 30-minute drive. Whereas servicemen and women while on tour, in particular, throughout the Middle East, may not see a priest for six months. … Who needs a pastor to guide them through these troubling times more than those who are currently serving and desiring to be fed from the Eucharist and be redeemed through Reconciliation? But there is just no priest. It’s really the desire to serve where the greatest need is and serve those who desperately need it.”

Chaplains many times are FOB Hoppers, which stands for someone who jumps from one forward operating base (FOB) to another administering the Sacraments and celebrating Mass.

“(Chaplains) are not allowed to carry a weapon,” Deacon Marchese said, acknowledging the dangers priests might face. “We have chaplain assistants who have been affectionately described as altar servers with machine guns. They are your sacristan, altar server, and bodyguard.”

To encourage dioceses to allow their priests to serve as chaplains in the Army, Navy or Air Force, the Co-sponsored Seminarian Program was established in 1992. The co-sponsorship is between the seminarian’s home diocese and the Archdiocese for the Military Services. Each entity agrees to pay for half of the seminarian’s expenses while in formation. Upon entrance into the chaplain candidate program the seminarian is commissioned as a second lieutenant or ensign in his chosen branch of service. Once ordained to the priesthood, the priest serves his own diocese for three years, then commits to serving the military branch for five years as an active duty chaplain. He can renew his tour if the archbishop of the Archdiocese of the Military Services, his own bishop, the military and he agree.

While these shepherds are away Bishop Noonan asks us all to pray for them. “We ask the Lord to bless them and keep them safe and return them back to us one day,” he said. “We are eternally grateful to these two men who serve our country, serve the Church, and serve the needs of those who especially sacrifice more than anyone else.”

By Glenda Meekins of the Florida Catholic – May 2019