Choosing to become Catholic this Easter 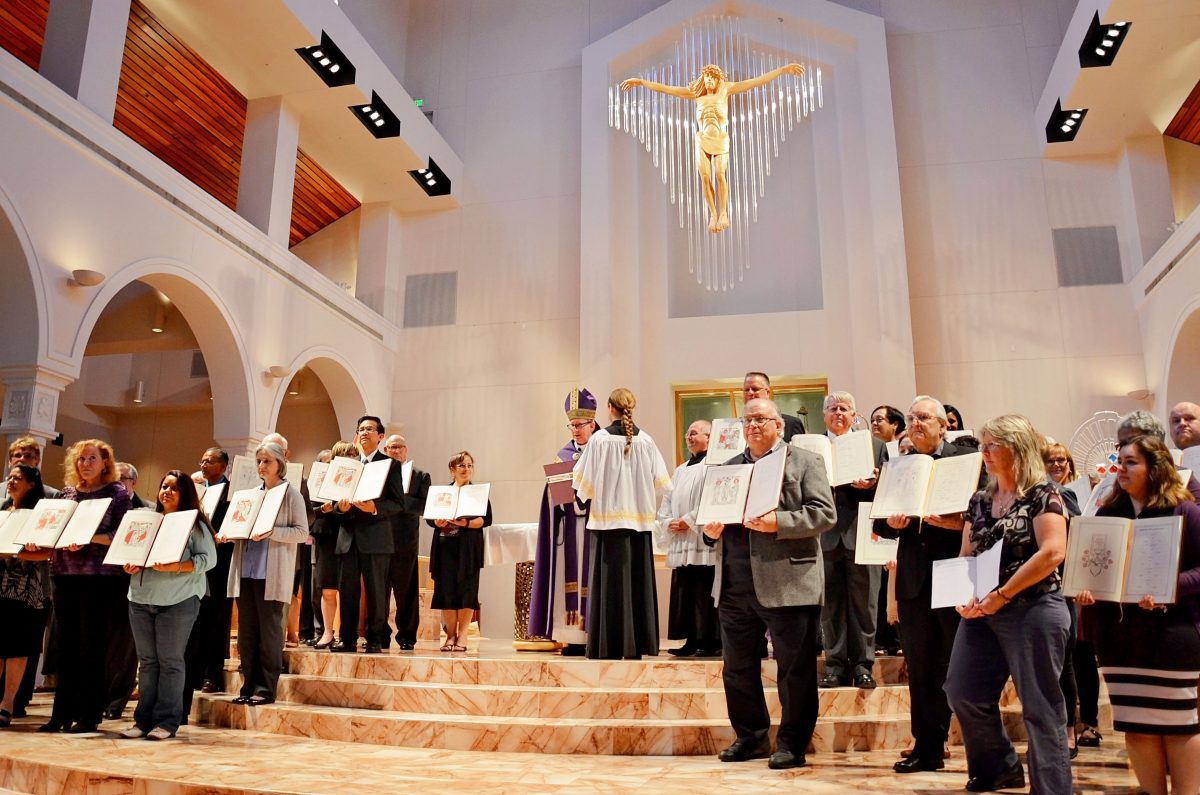 ORLANDO | Five hundred and eighty-six people from 60 parishes throughout the Diocese of Orlando professed their decision to become Catholic at the Rite of Election, March 5 at the Basilica of the National Shrine of Mary, Queen of the Universe in Orlando. Godparents testified before Bishop John Noonan that God has chosen these catechumens who are written in the book of the elect.

At the Rite of Election, individuals enter the basilica as “catechumens” or non-baptized persons and leave as “elect,” a person who has chosen to become Catholic through the Sacraments of Initiation (Baptism, Eucharist and Confirmation). These “elect” will receive those Sacraments at the Easter Vigil.

The ceremony dates back to God’s initial election of ancient Israel as His chosen people with whom He established a covenant—that they would be His people and that He would be their God. Christians still believe that God continues to choose people through the covenant of Baptism. The Rite of Election is a step closer in that journey.

For some, the journey started in the oddest of places. Jarrid Perusse of Most Precious Blood Parish in Oviedo said he, “got saved on a porch” during a summer internship as a door-to-door salesman. In the middle of his sales pitch the potential client asked, “Are you a believer?” Perusse said more than a dozen times people from various Christian denominations had randomly asked if they could pray with him, but this moment was different. “Something clicked,” he said.

In talking to family and friends, he noticed that a lot of them were Catholics. Although he had already been attending a Catholic church for a year, his eyes opened to see his faith in a new light and he decided to make the commitment.

For Melody Baker of St. Ann Parish in Haines City, things were different. A mother of two married to a faithful Catholic, Francisco Cruz, she woke up one morning and felt God was calling her to go to church. “I got in the truck and told my husband, ‘I’m going to church with you.’ My husband tells me now that I have more faith then he does,” said Baker laughing. As she spoke, her excitement was palpable. “My two children are on the journey with me,” she added. “It’s a family commitment. I learn more everyday as I go and with my kids, it’s even better.”

Earlier that day, her 14-year-old son said to her, “I can’t believe we did this together. We only have another month to go!”

But a month can seem like an eternity when you have waited 20 years as did David S. Jones of St. Lawrence Parish in Bushnell. Married “70 years and two months” to his wife Peggy, Jones is a 92 year old World War II veteran who fought on Omaha Beach, serving in the Navy.

Twenty years ago, his attending Mass was a charitable act for his wife, who after an accident could not drive. “That was God’s work,” she said with a grin. Jones just kept on going. When asked why he waited so long, he said, “I never rush into anything.”

As this journey of Lent begins, Bishop Noonan noted that these individuals are “preparing for the most important thing in all of life…Jesus Christ and His resurrection.”

Through Lent, “You will experience and know Christ, not only in His glory, but in His suffering and death because that is the center of who we are,” said Bishop Noonan.