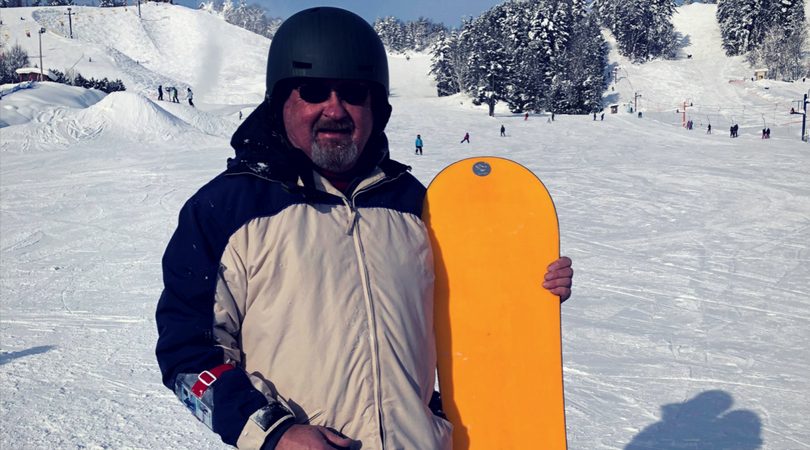 What do a surfer, snow boarder, dancer, Air Force pilot, convert to Catholicism and motorcycle rider have in common? They all form part of the incredibly complex personality of Dr. Lance Maki, the obstetrician and gynecologist who is also president of the Orlando Catholic Physicians Guild, part of the Catholic Medical Association. Dr. Maki splits his time between Lake Linden, MI and Indialantic, FL so he can practice according to his Catholic values.

Dr. Maki’s passion for obstetrics began when he was privileged to watch the birth of his first child, Adam. It was the 1970s and men were still not traditionally allowed to be with their wives in the delivery room. “I just thought it was the greatest thing I’ve ever seen,” he said. “And even though it seemed like something I could never do, I told my wife, ‘That’s what I want to do.’ She looked at me with skeptical eyes and said, ‘Yeah right!’” But he did become an OB/GYN and as he grew in faith and eventually converted to Catholicism with his wife in 1976, he faced the challenges his convictions presented while practicing in his field.

Despite the trials, he is proud to say that he has been fired from many jobs for refusing to perform tubal ligations and administer birth control. “Catholic doctors need to behave like Catholic doctors in the way they take care of and treat patients,” said Dr. Maki. Catholic doctors must “evangelize, evangelize, and evangelize – to refresh ethics and teachings of the Catholic Church.” He says this from personal experience. Just this month, he lost all of his work in Florida. He says, “It’s upsetting, but I know that the two things I’ve learned are the 2 T’s: Trust and Thanks. So, I’m in a trustful, thankful mode …”

­But Dr. Maki was not always of this mindset. “The thinking among most Catholic doctors trained in the system is that birth control is fine and in fact it’s required—we need to do it and tubal ligations are something that patients deserve and need to have. I had that thinking for the longest time,” said Dr. Maki. “Thankfully fellow CMA member, Dr. Helen Krause questioned me on this a number of years ago and I acted a little bit stunned.” Upon further research, in his training of Saint Pope John Paul II’s Theology of the Body and Pope Paul VI’s encyclical Humanae Vitae, he realized that he “had an obligation to follow the teachings of the Church.” So he publicly stated that he would longer perform tubal ligations or prescribe birth control.

Humanae Vitae and its moral teachings on the sanctity of life have also touched Dr. Maki in a personal way.  He remembers considering a vasectomy after his third child. He and his wife of 50 years, Kris, were in their mid-20s and felt that three children were enough. The doctor refused to perform the surgery stating that they were too young. “I let it go and we had our daughter Kerry who is our third child,” said Maki. “Shortly thereafter we lost Adam in a car accident and so, after that we had three more beautiful children that I would never ever wish to not have had.”  One of those children, Michael, was born with Asberger Syndrome. Although the Maki’s lost him many years later, they treasured him “as a miracle” despite the trials that his illness incurred. When asked what advice he would give a pregnant mother with a diagnosis of severe illness for her unborn child, he explained, “without getting preachy, I would tell them that this is a child of God and you need to be open to the possibility of raising that child for however long you have them.”

Click here to listen to Dr. Maki speak about Natural Family Planning and more in his podcast interview with the Florida Catholic.

By Glenda Meekins of the Florida Catholic – January 11, 2018