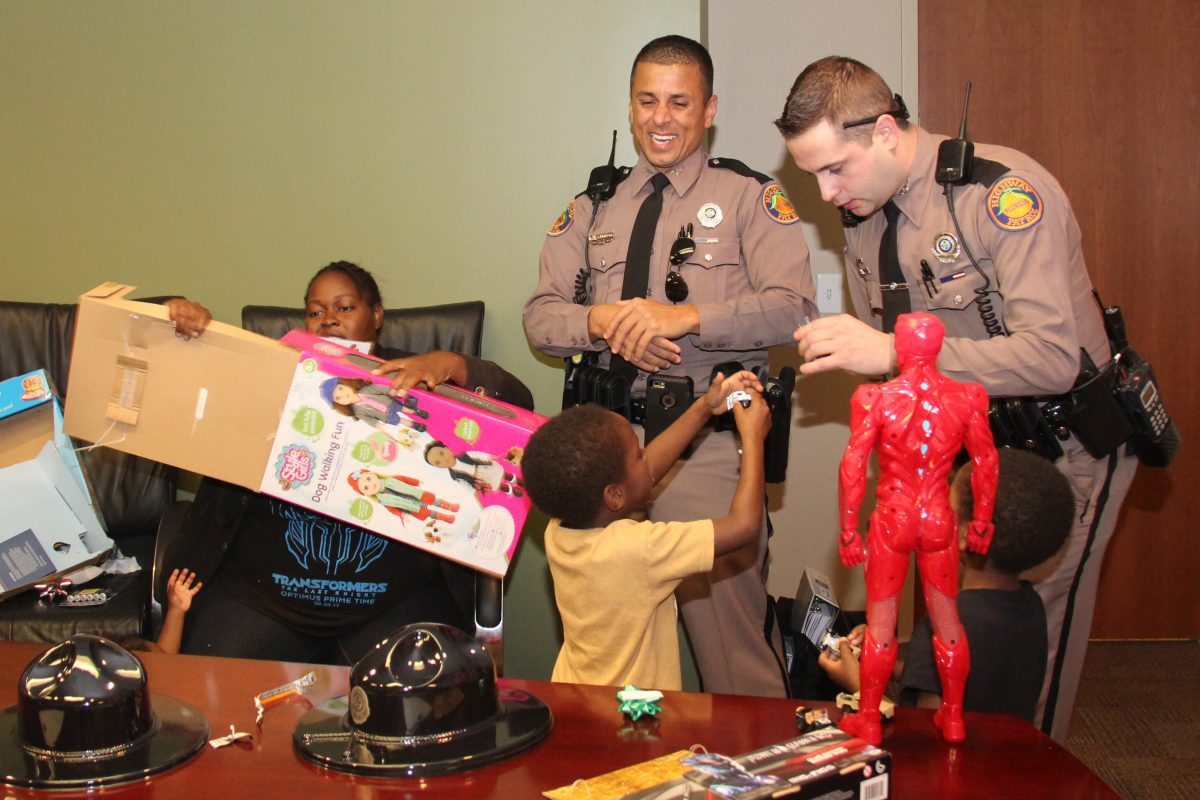 By Glenda Meekins of the Florida Catholic – January 2, 2018

On Dec. 20, Florida Highway Patrol Troopers Fabio Azevedo and Stefan Drach were reunited at Catholic Charities of Central Florida with a family they helped rescue just one month earlier to bring them an early Christmas. It was around 3:30 a.m. when the troopers were on their DUI squad patrol and spotted the young family with three children walking. “I had to turn around,” said Trooper Azevedo as he retold the story. Being a father, it was the children that moved him to stop.

He and his partner approached the family. He recalls that James and Jennifer were hesitant at first. Then Jennifer spoke up and shared that they had been homeless for about two months. Trooper Azevedo had helped another family find a shelter a year earlier, although it was only for women and children. “My thought was, ‘If I could get the children and her out of the streets, we could help dad later,” he said. But the shelter had closed.

He called 211 which informed him that there would be a lengthy intake process before they could be admitted to any shelter. Due to the crisis in Puerto Rico after the hurricanes, all shelters were full. He spent the rest of his shift making calls. “I literally didn’t sleep all day,” he said. “After I got the kids to school, I called parishes, every possible shelter and left tons of messages.

“Just to get them out of the street for one day, I was going to put them in a hotel and pay out of my pocket and then try to continue making phone calls until someone was able to help me. We were just running out of time,” he added. It was then that Julie Yetter, senior director of operations for Catholic Charities, returned his call.

With the help of caseworker Anita Capetillo, the family was put up in a hotel and given food and bus passes while James looked for work. At the time of this interview, he had procured a seasonal job with UPS and was planning to apply for full-time work there. James had struggled to find work as a landscaper and Jennifer was pregnant with their fourth child.

“Our hope is for them to find permanent housing,” said Capetillo. “We’re working on that by trying to help James get permanently employed and securing an apartment. We’re helping the stranger find shelter,” she said. “Giving them hope and the opportunity to become self-sufficient.”

As the troopers and family gathered at Catholic Charities to celebrate an early Christmas, along with Capetillo and Sergeant Kim Montes, the children opened their gifts. Carrie, the youngest, squealed with delight as she opened a doll almost as big as she was and a small toy computer. Her brothers, James Jr. and Artavis, enjoyed Spiderman and Power Ranger figures and a train set.

Referring to the troopers, Sergeant Montes pointed out, “They’re also parents, so they understand.” Turning to James and Jennifer, she added, “We want to continue to help you. We’re working on beds and other furniture. We’ll bring it right to you when you get settled.” She assured them they were also seeking baby items for the little one on the way.

“I’m glad that we were able to help,” said Trooper Azevedo. “A lot of police work is reactive. We get calls and react to it. In our position, we get to be proactive and go out looking for people. But we never expect to find something like this.”

As the troopers hugged each of the children, Trooper Azevedo reminded them to do well in school and respect their teachers. Shaking James’ hand, he said, “I hope the next time I talk to you, you’re in your place. Keep working hard and it will pay off. Sometimes you have to take that leap of faith and it will work out.”

Trooper Drach placed a Junior Trooper badge on James Jr. and said farewell. But the family had one more stop, the mission market where food and facilities ministry manager, John Bonfiglio had set aside food to get the family through at least one more week. “I was told to bless them with what we have and I did,” he said. Then he quoted Mt 25:45, “’What you did for the least of my brethren, you did for me.’ That’s the foundation of Catholic Charities.” It is also that caring that drove two troopers to help a family in the middle of the night.