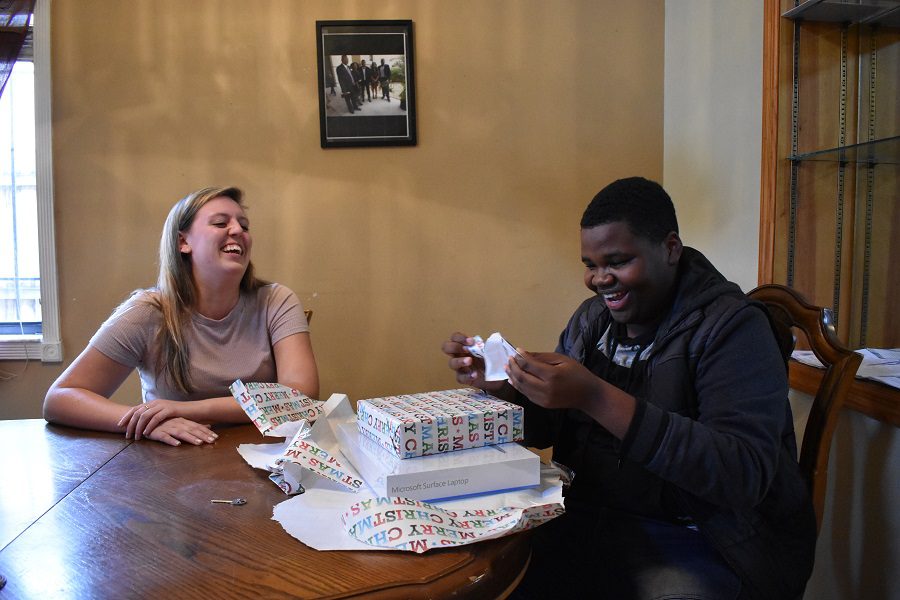 John, a young Haitian refugee, receives a laptop computer, headphones and a bonus Netflix gift card from graduate student and sponsor Kristen White. The gifts will help John next year as a college student, while providing a little down time in between assignments. (CHRISTINE SHIELDS)

ORLANDO│Christmas came early for John, a 16-year-old Haitian student, who attends Wekiva High School in Apopka. The unexpected gifts came from Kristen White, a young graduate student at Indiana University-Purdue University Indianapolis and her faith and social work community back home. The gifts turned out to be a surprise for everyone.

“Social work is a big part of my life as well as a love of Jesus and God,” explained the young Catholic student. “When you have, you give.” White has sponsored a child’s Christmas through the Salvation Army for years in Indiana, but this year the distance would require something different. Now living in Orlando for a semester as part of the Disney College Program and having worked with Catholic Charities caseworkers in her last internship in Indiana, she was sure Catholic Charities of Central Florida could help her find someone to sponsor and she was right. Kim Latt, caseworker for the Refugee Youth Program, told her about John, a client she was helping prepare for the Florida State Assessment test (FSA), an exam required of all seniors for graduation.

John’s family arrived from Haiti after seeking political asylum. One of four children, John hopes to go to college to become a pilot, provided he gets the necessary scholarships. When John got Latt’s call, he was surprised and happy. “You know many people who will wish you a Merry Christmas, but they don’t give you a gift,” said John. “Not knowing someone, you don’t expect anything. So when I heard this from Catholic Charities, it was the best thing ever.” 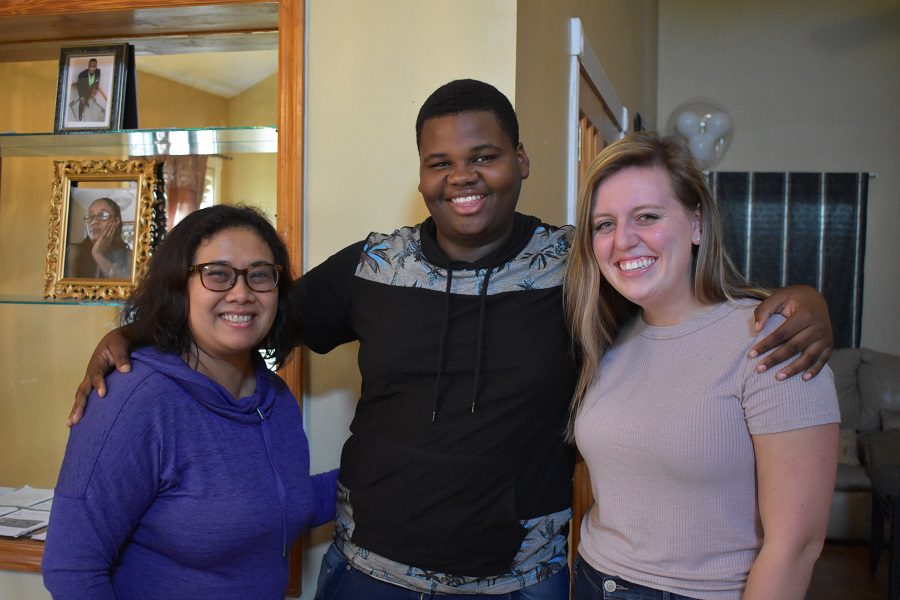 Although Latt asked him what he desired most, his humble reply was, “Anything you give me, I will be grateful about it.” Latt pursued the question convincing him that it would be easier for White to shop if she knew what he wanted. “Since I am a senior and college is next, you need computers for projects and notes,” he explained. “It was going to be hard not having a place to store my files. So that was the first thing that popped up in my mind.”

The news hit White hard for a moment. The 23-year-old grad student panicked. “When I saw that I thought, ‘Oh no. I’m really not going to be able to do this,’” she recalled. “But then, a lot of prayer and thinking made me realize there is no reason that God would have connected me to Kim, and Kim to John, if I wasn’t supposed to do this. That’s just not how it works. So I was nervous, but I reached out on Facebook to my friends.” She was shocked. Her faith and social work community raised $800 in 24 hours.

Along with her own contribution and the help of Black Friday sales, she was able to buy the laptop, headphones, and a Netflix card because she wanted him to have, not only something he needed, but something just for fun. As a college student, “that’s the way I would decompress,” she remembered. “That was such a luxury that I took advantage of. I wanted that for him too. I’m really blessed that there are people that also see there is a need to give and feel God’s movement.”

White says her parents and Catholic school teachers raised her with a commitment to stewardship. “It’s just never been at this level,” she noted. “But I always go back to the idea that God proves himself every day, all the time. It can be in big ways and small ways, but He’s always there. When I was praying about it and wondering how I was going to do this, I realized God doesn’t connect you to people; He doesn’t do things that aren’t for a reason. I’ve known that my whole life, but sometimes it just smacks you in the face. How can you even doubt for a second that He’s here with us? I’m just the person in between. God knew this was another thing that would help him (John) reach his goals.”

As she headed to John’s house, Dec. 13, for the special delivery, she admitted she was nervous about meeting him or “getting gratitude”. “I hope that he knows that I would have done this even if he had never known who I was. My community made this possible… Everyone who donated is in some way connected to Christ.”

“It means a lot to me,” acknowledged John. “For someone you’ve never known to do that for you and is thinking that maybe you need something for Christmas means more than I can express. Some people skip over you like you don’t exist. She didn’t do that. She asked me what I wanted. She didn’t know me, but made this incredible gesture.” For White, it was simple. “With great treasure comes great responsibilities,” she said. “To know that someone doesn’t get to have Christmas makes my heart sad, so I just like being able to give back… Social work is where I am dedicating my life, helping kids who, maybe aren’t experiencing the same things as John, but they’re going through a tough time. I am going to be asking people for the rest of my life to help these kids.”

By Glenda Meekins of the Florida Catholic – December 17, 2018