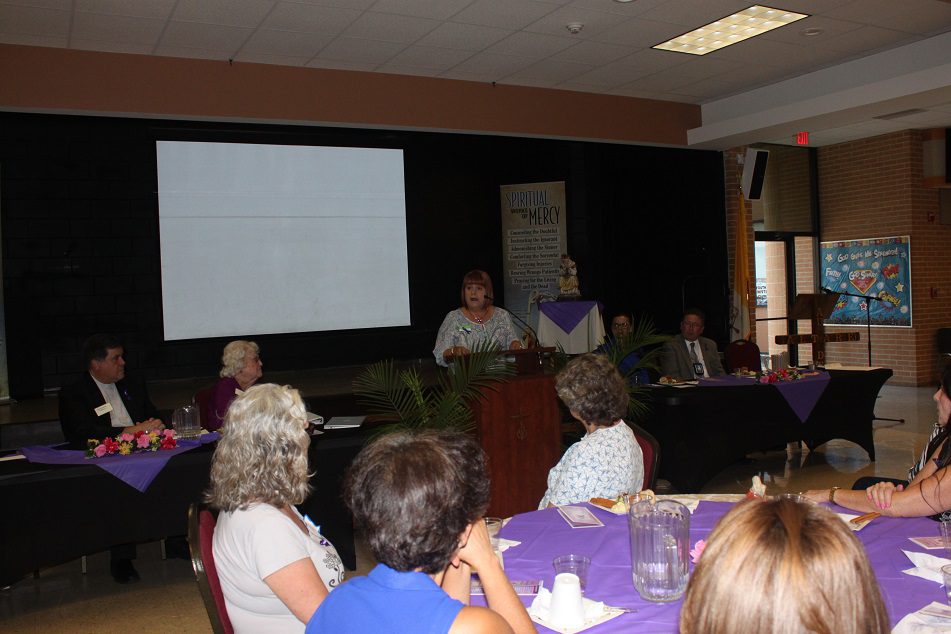 ORLANDO | A woman shot in the shoulder and leg, another threatened with a knife, and a mother whose life ended too soon. They all have one thing in common –they were all victims of domestic violence.

October is Domestic Violence Awareness Month, and Blessed Trinity in Orlando educated parishioners and other community members during “Behind Closed Doors,” a program to help stop domestic violence.

Erin McCaulley, victim services director for the State Attorney’s Office, said it’s important not to blame the victim, who is often isolated with limited access to funds and children to care for.

“It’s important to say it’s not your fault,” McCaulley said. “You can help them by validating their feelings. You don’t know their background or how they got there. It took me a while to understand it’s not as simple as pack your bags and go.”

Harbor House, an emergency women’s domestic violence shelter helps address some of the challenges involved with leaving an abusive partner. Michelle Sperzel, CEO of Harbor House, said anyone can be a victim of domestic violence because it affects all socioeconomic and cultural backgrounds, and victims are sometimes threatened with deportation or losing their children. However, they can qualify for the U-visa, which allows them to find employment and get legal residence. Harbor House also offers a safe haven for victims, a daycare for children, among other programs.

“Please keep your eyes open and your ears in tune. If you hear someone say something that doesn’t sound right, ask them what they mean,” Sperzel said. “If we can change one life one day at a time, then we have done a huge service to our community.”

Michelle Latham, Domestic Violence Unit Chief with the State Attorney’s Office, said she wants victims to understand that their goal is not to ruin their life, relationship, or have their children taken away. When offenders get arrested, it doesn’t mean they are going to jail. Some are put on probation and go through a Batterer’s Prevention Program to learn effectively react to everyday stress.

“It really helps them,” she said. “In 20 years, I have seen maybe three, maybe five offenders who have gone through the Batterer’s Prevention Program and have re-offended.”

Kathy Bonner, who serves on the Council of Catholic Women and is a parishioner at St. Mary Magdalen, attended the event and said she grew up with domestic violence as a child and now is trying to educate people on this issue as well.

Father Miguel Gonzalez, Rector at St. James Cathedral, said his eyes were truly opened to the incredible tragedy of domestic violence, and people don’t realize that the person next to them could be a victim. His parish is addressing domestic violence by placing informational posters on the back of bathroom stalls so victims can get help.

“As a church, what are we to do?” he asked. “We must train our parish staff and have resources for someone in need. The church continues to be a safe haven for victims. We try to break the cycle of violence and provide resources. Domestic violence does not discriminate. We need to keep our eyes open and our ears attentive and watch for those signs.”

For more information on domestic violence awareness and resources, visit www.usccb.org, www.nccw.org, or victims may call a 24-hour hotline at 1-800-500-1119.