Church Works for Justice because ‘no man is a problem’

Archbishop Thomas Wenski of the Archdiocese of Miami presented the keynote address at the Feb. 6 gathering of the 17th Annual DART Clergy Conference, held Feb. 5-7 at the Hilton Orlando in Altamonte Springs. 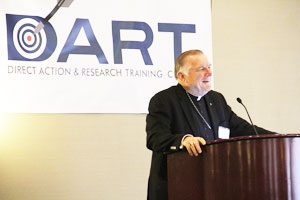 Archbishop Thomas Wenski of the Archdiocese of Miami presented the keynote address at the Feb. 6 gathering of the 17th Annual DART Clergy Conference, held Feb. 5-7 at the Hilton Orlando in Altamonte Springs. He spoke about social justice from a Catholic perspective before an audience of more than 100 clergy and lay ministerial leaders from various faith denominations throughout the country.

DART (Direct Action and Research Training Center), which receives funding from the Catholic Campaign for Human Development, is an organization that helps faith-based communities organize to pursue justice and social change at the grass roots level. Archbishop Wenski is chair-elect of the U.S. Bishops’ Committee on Domestic Justice & Peace, which oversees the work of the CCHD.

Archbishop Wenski said the very essence of Catholic social teaching centers on one steadfast belief – no man is a problem.

“For Catholics, there is no such thing as a problem pregnancy, only a child who should be welcomed in life and protected by law,” he said. “The refugee, the migrant is not a problem. He may be a stranger, but a stranger that must be embraced as a brother. Even criminals, with all the horrors of their crimes, do not lose their God-given dignity as human beings.”

Archbishop Wenski said Catholics remain unwavering in their beliefs because of Christ Who became man. We recall the words of Pope John Paul II when he said, “in Christ we see the divine face of man and the human face of God.”

Archbishop Wenski reminded the audience that in the Gospel, we see Jesus doing good– works of mercy, compassion and love. And yet, we see adversaries pick up rocks to stone him – and eventually they do crucify him. They cannot deny the good works that they have seen with their own eyes – but they do deny that these good works point to something more, to something beyond the works themselves.

“We should not be surprised if the attitudes towards Jesus that we find in the Gospel continue today in the attitudes toward His Church,” Archbishop Wenski said. “Of course, it’s true that when the Church commits herself to works of justice on a human level – and there are only a few institutions in the world which accomplish what the Catholic Church accomplishes for the poor and disadvantaged- the world praises the Church.”

“But when the Church’s work for justice touches on issues and problems which the world no longer sees as bound up with human dignity, like protecting the right to life of every human being from conception to natural death, or when the Church confesses that justice also includes our responsibilities toward God himself, then the world not infrequently reaches for stones,” he said.

He added that while secularism is increasingly challenging, the role of faith-based groups in public square, organizations such as DART, keep the need for social justice alive in the political arena.

“Your witness proclaims that man matters,” Archbishop Wenski said, adding, “We engage in the “public square” because we are convinced that we have something to contribute.”

Pope Francis put the Church’s works of mercy and justice at the forefront of his papacy, especially when it comes to the poor. In his Lenten message, he says, “In imitation of our Master, we Christians are called to confront the poverty of our brothers and sisters, to touch it, to make it our own and to take practical steps to alleviate it…We address the social problems from our understanding of our vocation as Christians…We see them in light of our understanding that the form of this world is passing away, and that God is preparing a new dwelling and a new earth, in which justice dwells.”

Bishop John Noonan of the Diocese of Orlando also spoke about Catholic Social Teaching during his welcome address at the conference.