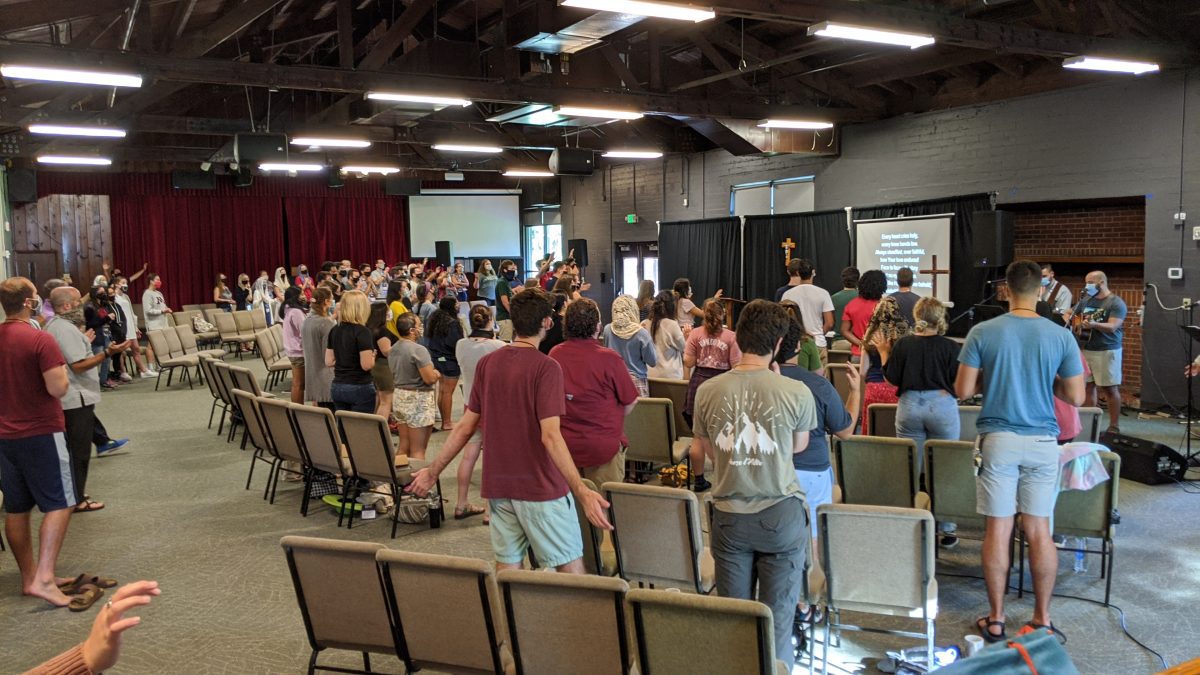 Student leaders from across Florida campuses join for the first time to come together as family ona Student Mission Retreat. The goal is to equip these regional families of faith to build relationships with each other and on campus. All students took extensive COVID precautions, including (but not limited to) testing and wearing face masks, (MADDIE TERNYIK)

LEESBURG  |  After five years in the making, more than 100 students from across Florida came together for the first student mission retreat of its kind Aug. 14-16, 2020.

“There is something happening that is extraordinary — to see what the Lord is doing and pulling together,” said Brotherhood of Hope Brother Clinton Reed, regional director for St. Paul’s Outreach. The organization works across the United States on college campuses, growing relationships through communities of faith and preparing them for evangelization.

“In the midst of a culture that in many respects is turning further and further away from a Christian viewpoint, what I see happening is the Lord bringing together a family of people,” Brother Reed said. And that is essentially the mission to which he and others feel God is leading them. 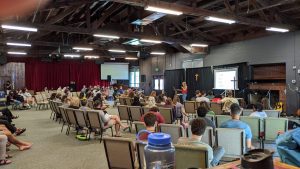 On the placid grounds of the Warren Willis Retreat Center in Leesburg, Catholic campus ministry leaders from the University of Central Florida, Florida State University in Tallahassee, University of South Florida in Tampa, Valencia College in Orlando, Flagler College in St. Augustine, University of Florida in Gainesville and Palm Beach Atlantic in West Palm Beach found respite, friendship, and family within the loving arms of their creator. They were there to ask for God’s blessing to make them a family of God’s people, worship God and equip them to properly share the Gospel with fellow college students on their respective campuses.

In July, leaders considered canceling the event due to the pandemic and took it to prayer. Afterward, two planners revealed they received an image while in prayer. Both saw an open field with which they were familiar, but a thick fog had descended on it.

“Of course, the fear is you don’t know what’s in the fog,” Brother Reed said. They sensed the Lord saying to them, “I know what’s in the field and I’m inviting you to boldly step into the fog because I want to protect and provide for you in this retreat.”

They agreed it was a powerful message to go forth. They prepared by having all attendees tested for COVID-19, by wearing masks, and adding other thorough precautions.

Acknowledging that many young people aren’t responding to a life of faith, he said they’re experiencing isolation and “feeling the scourge of loneliness.” He noted the COVID pandemic has made this even worse. 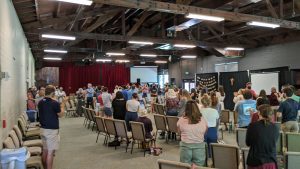 “I don’t think most people understand how much of a plague this is for young people and that it is destroying them,” he said. “These young men and women are longing to be a people, the depths of which can only be brought about through God’s grace. It’s a matter of coming before him and asking Him for that grace.”

For Paul Menendez of the University of South Florida, this “family” is exactly what he was looking for to fill the void he found in other groups. He began searching for a spiritual family as a freshman, so he joined the frisbee team. After a rough breakup, he decided to talk to his friends about it. Their response was less than appropriate, suggesting he sow his oats. “That’s not what I wanted,” he said.

He stopped socializing with them as much and sought out a community more in common with his beliefs. “When you go into college, whether commuting or living on campus, school becomes a place where you spend most of your time,” he said. “It’s important to spend time with people that add something to your life.”

The idea of a spiritual family bore fruit when he was paired with three UCF students. They prayed over him, asking God to take the tools they learned out into the world.

One particular retreat topic brought it all home. It explained the depth of relationships comes from what you share in common. “If what you have in common is the Lord, then there’s a vast and infinite depth to that.” At the Catholic Student Union, “the depth of the relationships you build is the passion that you have for Christ. That allows you to invite people more intimately into your life and to get to know people in a more intimate way.”

That intimacy flowed from his spiritual Catholic Student Union family after numerous family losses. The priest from the student center anointed his grandmother and celebrated her funeral Mass. “Finding a family that I could take that to outside of my own family, made a huge difference.” On retreat, Menendez learned how to engage with others at a deeper level to foster those family ties.

In his work across campuses, Brother Reed said he has noticed the Lord actively doing something in campus ministry. Anthony Hammen feels it, too. 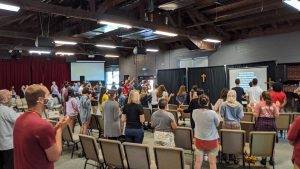 “We see our world around us paralyzed in fear,” said Hammen, president of Catholic Campus Ministry at UCF. “It was cool to be a part of God’s people, where we could prudently come together and still fight for relationships and community time, to take steps and respond to the Lord.” For him, the gathering “exceeded expectations.”

He understood and embraced the idea of a spiritual family, finding it integral as a witness of Christ’s love. Hammen said he is beginning by “loving well” those who surround him. “From the place of one spiritual family, we received the tools, empowering us to let go and share the Gospel,” he said. “I definitely see the need. I know that people are desperately looking for the truth, to know they belong and that they are loved.”

FSU nursing student Monica Kan agreed. She was excited leaders from other campuses who keep the ministry’s mission alive during the pandemic united. She hoped what she learned will help others to her same discoveries, her “true identity as a daughter of God.” Her relationships in campus ministry led her to “answer the question of who I was and who I wanted to be.”

The retreat helped her continue to forge friendships that are helping her build a community of people that pray for each other, who work to bring others closer to God, and are “fighting the same fight.” The Friday after the retreat, Kan was able to put her lessons to practice during a campus wide scavenger hunt which engaged 200 students from different faith backgrounds.

Brother Reed believes the Lord is preparing “a people for himself, a generation set apart for him.” In Florida he sees a unique “convergence of factors supporting this regional reality” — of a family set apart.

His fervent prayers and that of the attendees was, “to make us a transformational people equipped to transform Florida and beyond.” When asked what the Lord said, he responded joyfully, “I think the Father responded to that in our time of worship. I think he said, yes.”

By Glenda Meekins of the Florida Catholic, August 26, 2020