Coming of age in faith: Celebrating a Latin-American tradition 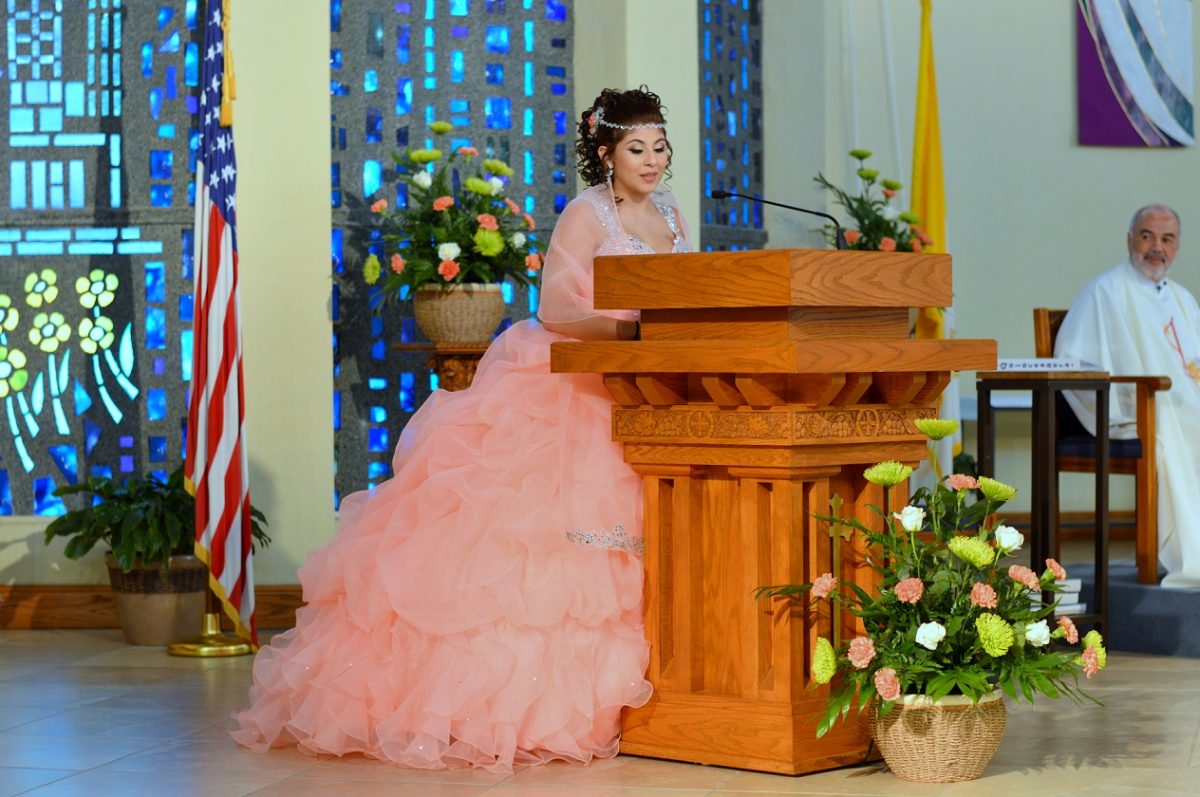 Karina Dominguez reads from the Book of Jeremiah at the Mass celebrated for her Quinceañera at Holy Redeemer Parish in Kissimmee, July 29. (DIEGO SOLIS | COURTESY)

By Glenda Meekins of the Florida Catholic staff – August 2, 2017

ORLANDO | Surrounded by family and friends, Yesenia walked down the aisle at St. Francis of Assisi Parish in Apopka as a child on July 29. According to her family’s Mexican tradition, she left the church that day as a young woman, or a quinceañera, a young lady of fifteen (quince) years (añera). The quinceañera celebration is a treasured custom among Latin American families in which they accompany their daughters on the journey beyond childhood into womanhood.

Yesenia has celebrated all of her Sacraments at the parish, from Baptism to Confirmation, so it was appropriate that this memorable moment should be shared by her family and faith community in the eyes of God. The Mass took place in what has been her spiritual home. In her blue dress and accompanied by her “damas” and “chambelanes,” her female and male court of honor respectively, and witnessed by family and friends, Yesenia was “crowned princess for the day,” said her mother, Olivia. Her new tiara represented the beginning of her womanhood and her new responsibilities as an adult in the world and before her Creator.

Her godparents, Alma and José Lugo, presented Yesenia with a bible and rosary, signifying the needed to keep the Word of God, the life of Christ and example of the Blessed Mother as a guiding force in her life. Her father presented her with a ring reminding her of the responsibility that she now acquires as she passes into womanhood.

“For us, this is our only daughter and our princess,” said Olivia. “For us, her reaching the age of 15 is the greatest blessing that we could receive.”

Part of the ritual included the offering of flowers to the Virgin of Guadalupe. Yesenia carried the flowers and laid them at the Virgin’s feet in thanksgiving for having reached this beautiful age.  As she knelt before Our Lady, she also asked for guidance in the next phase of her life. Olivia said, “The Virgin Mary guides her on how to be a woman according to the faith. She will also be a mother, so she serves as an example. Being our queen and Virgin of Guadalupe, for us as Mexicans, she is truly the first mother of us all. She is our spiritual mother and we pray that Yesenia follows in the footsteps of the Virgin Mary.”

Across town, at Holy Redeemer Parish in Kissimmee, another young girl, Karina, was also celebrating her quinceañera. Over the summer, seminarian Francisco Ojeda helped her in the selection of readings and preparation for the special day.

“It was so powerful to see God calling the young in the Scripture that she chose,” said Ojeda. “The reading that was selected was Jeremiah being called to serve God (Jer. 1:4-10). And Jeremiah’s response was, ‘I am just a youth. What do you want from me?’ As a seminarian, sometimes we think, ‘I’m too young for this.’ But through God everything is possible. It doesn’t matter what the world says—in God’s eyes you are always worthy.”

Karina said that the reading was the most difficult part as she was very nervous, but Father Fernando Gil reassured her. “He told me to not be nervous and just read and listen with my heart to what the reading said. The reading told me not to be nervous just because I am so young. I can do bigger things than what is expected of my age and I don’t have to be scared of what I’m doing next. God is always with me.”

Karina said she felt that the Mass has helped her as she transitions into adulthood. “It was meaningful to me because as I am growing older, it reminds me that I can have a relationship with God, so that he can lead me in the right way to make decisions for myself. I can make better decisions for my career, my life. I’m transitioning from a young girl and it’s good to know that I can have that relationship with God as I grow older.”

Afterwards the rejoicing continued with more than 250 guests who came to celebrate her coming of age. This was also enshrouded with ritual starting with the change of “slippers” indicating the transformation from childhood to womanhood. She also received a medal of the Virgin of Guadalupe, which will be a lifelong keepsake. After the traditional first dance with her father, she danced with her “chambelanes” representing herself as a woman in society.

For Karina’s mother, Angelica, this is her youngest child and last daughter to mark the joyful passage into womanhood. She is grateful knowing that Karina is well accompanied by her physical and spiritual family.

“The celebration marked a different stage of her life, but primarily it was to give thanks to God for her arrival to this day. So we presented her before Him, in accordance to our Catholic tradition.”