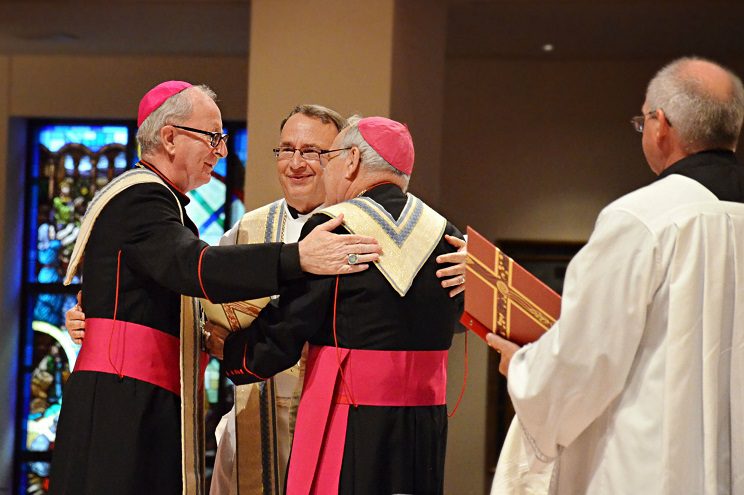 ORLANDO | Healing, reconciliation and unity—these are the words that resounded in the hearts of more than 1,200 believers gathered for the Common Prayer service marking the 500th anniversary of the Protestant Reformation, June 6 at the Basilica of the National Shrine of Mary, Queen of the Universe.

The service was the fruit of 50 years of ecumenical dialogue between the Catholic Church and the Lutheran World Federation, coming out of Vatican II as well as the direct outcome of Pope Francis’s address last October 2016 in Sweden where he stated, “As Catholics and Lutherans, we have undertaken a common journey of reconciliation. Now, in the context of the commemoration of the Reformation of 1517, we have a new opportunity to accept a common path….”

More than 20 lay members of both the Catholic and Lutheran churches took part in the prayer service, which included prayers in six different languages. Among them was Lynne McCabe of Santa Maria del Mar Parish in Flagler Beach. “I will never forget this day,” said McCabe. “It was so moving.” She and her husband, Mike, are part of the Christian Unity Ministry at their parish.

Their pastor, Father Alberto Esposito, helped coordinate the event. “It is just wonderful that we’re gathering together in the house of God to learn from the past and to move to the future with great hope and the spirit of ongoing reconciliation,” he said.

Although some found it painful to recollect the divisive moment in history, Father Esposito noted, “One approach is to see the Year of Mercy, which has just passed, as a springboard for this event. The Holy Father acknowledges that there have been divisions and difficulties over the years, but somehow, the Lord being rich in mercy, has used this historic moment as a possibility for forgiveness, reconciliation and a new understanding of what unites us. It is very much a manifestation of mercy,” he added. “So, while certainly we are saddened by the division, we know that when things are divided, the Spirit of God is working overtime to bring us back together.”

Bishop Felipe Estévez of the Diocese of St. Augustine echoed that sentiment saying, “We took the anniversary as a “kairos”, an opportunity to draw us closer, because that is the will of Jesus Christ…If Christians cannot be together, then I think the proclamation of the gospel is undermined. Then we are not walking the walk.” He added, “In many ways we share and confess a common faith. We are together members of the Body of Christ.”

Both sides confessed their part in promulgating division, harm and discord toward the other. Bishop Marcus Lohrmann of the Florida-Bahamas Synod of the Evangelical Lutheran Church of America said, “Since Catholics and Lutherans are bound to one another in the body of Christ as members of it, then it is true of them what Paul says in 1 Corinthians 12:26: ‘If one member suffers, all suffer together; if one member is honored, all rejoice together.’”

Recalling this suffering, Bishop John Noonan of the Diocese of Orlando prayed, “Illumine our hearts and heal our memories… prepare us to repent for the dividing walls that we, and our forebears, have built, and equip us for common witness and service in the world.”

Ruth Mohlenhoff, a member St. Armands Key Lutheran Church who has long worked toward unification of the churches said of the event, “It was a long time in coming.” She hopes to see more. Others such as Ana and Elpidio Lin-Justiniano, parishioners from St. Rose of Lima Parish in Kissimmee said they “came to see the togetherness between all the community and religions,” and to learn from one another. They hope it is a new beginning.

Lutheran Reverend Dr. Russell Meyer pointed out, “There is a special unfolding of love that is occurring with Catholics and Lutherans globally, but particularly in the United States. What we are doing in the U.S. in many ways is leading the church globally in reconciliation. In spite of our well known differences, we have found ways to emphasize how God brings us together…, that we might be the hands of God in the world—showing what love of neighbor is about.”