Community experiences life of as a refugee 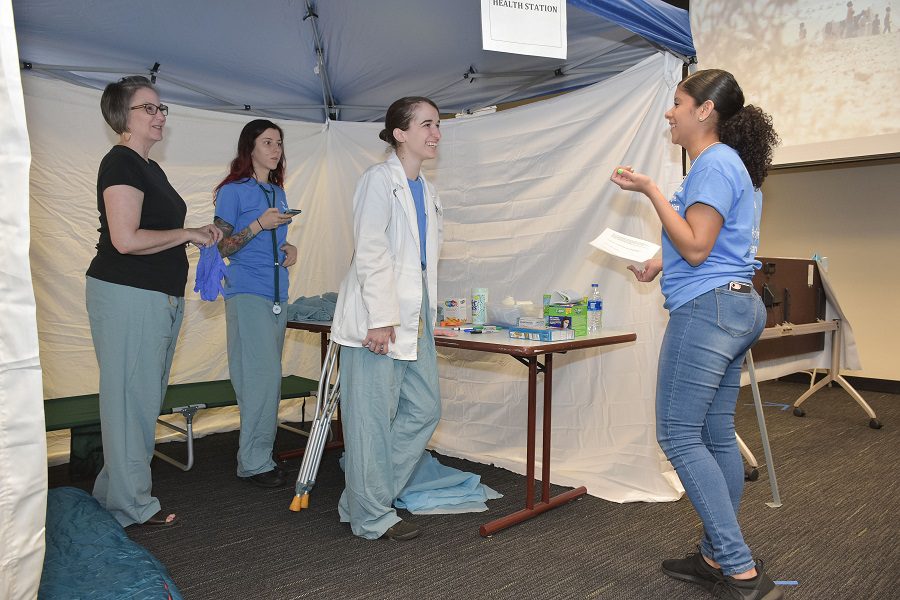 For a third year, Catholic Charities of Central Florida’s Refugee Resettlement Program partnered with the social work department at the University of Central Florida (UCF) to offer hands-on experience demonstrating difficulties faced by refugees. The refugee simulation on April 17th, offered a glimpse into life as a refugee. In the first station, the participant is given an identity and the story of a real-life refugee as the backdrop to their experience, one involving war and the need to escape quickly. The simulated refugee is then given 15 seconds to grab as many personal items as they can, as shown on pre-made cards, depicting the choices refugees must make as they flee.

UCF professor Mary Mann, who teaches a course on immigrants and refugees says, “Students have worked for about 4 weeks to plan the pathway people would take based on what they have learned about refugees. They researched real experiences of refugees to use in the simulation, so people could really get a sense of what it is like for them.”

The next stop simulates the border crossing, where an agent asks them questions in a language that is not their own. Then, the participant is shuffled off to a station where they must answer a series of questions, and if they do not pass, they must enter detention. The person is shown their weekly ration of food, which gives one the sense that food is scarce. Along the way, people begin to lose some belongings and are forced to leave loved ones behind.

Brianna Dickey, a junior at UCF, says the experience was a bit overwhelming. “Even though I knew it was a simulation, I really felt what it would be like. It was frantic trying to gather belongings in a hurry, then arriving at the border station where they were asking questions in another language. To think that 65 million people go through this, it really pulls at the heartstrings and you have empathy and a little more understanding,” she said.

“It’s good to take people out of their comfort zone and open their eyes to what is going on, so they can have compassion,” says Nicole DeCarufel, case manager from CCCF Refugee Resettlement. DeCarufel says one participant had a very strong reaction, especially when her (simulated) child was taken away, highlighting one of the tragedies that can happen to refugees on their journey to safety.

“It is important for people to feel it, if only for a minute, what it would be like to be a refugee, faced with losing things and people you love,” says Professor Mann. “If you feel it, you can care. Then you can talk about it, even advocate for them, and not vilify them.”

“This year the numbers of refugees who are coming has dropped, but the need has not decreased,” says DeCarufel. “The need is great, and we have the resources to help, whenever they arrive.”

If you would like to mentor a refugee or make a donation, please contact the CCCF Refugee Resettlement Department at 407-658-1818.