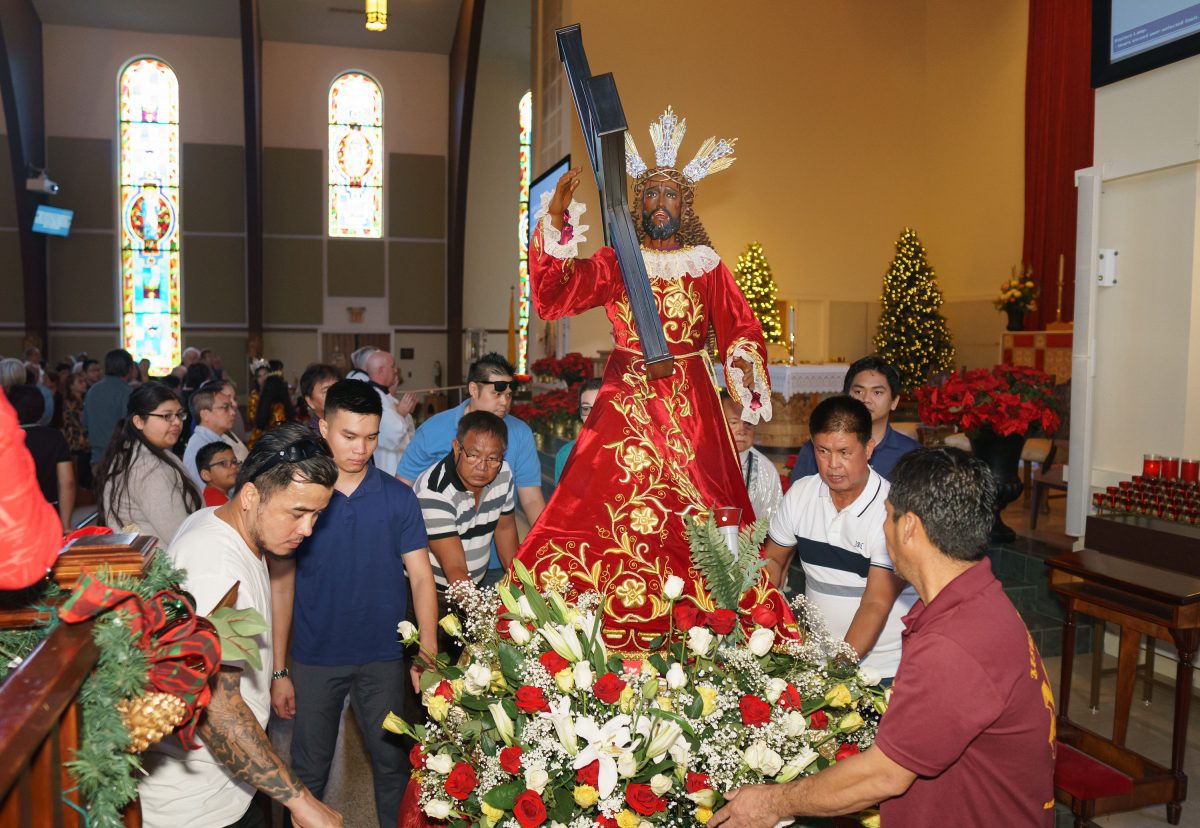 DELAND | Three years ago, after reading about the massive crowds that gathered to celebrate Jesus Nazarene in the Philippines, Father Tom Connery, then pastor of St. Peter Parish in Deland, approached Ligaya Cortez. He asked if she could procure a Black Nazarene statue (as it is known) from the Philippines and bring it to St. Peter.  He hoped it would bolster the faith of his Filipino and Mexican parishioners and welcome African Americans to the parish. Three years later, he says it did. Jan. 12 marked the third year the parish celebrated the Traslación, the commemoration of the statue’s relocation from Manila to the Minor Basilica of the Black Nazarene, or Quiapo Church in 1787. Father Kenny Aquino, who oversees the Filipino Ministry in the diocese, offered the homily and joined other Filipino clergy and deacons in the celebration. 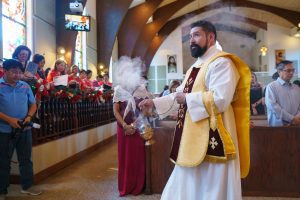 “Filipinos are very fervent and very faithful,” said Father Connery, who could not attend. “It (the statue and celebration) added spirit and life to our community. It also gave everyone a chance to learn a different devotion. The parish is embracing diversity.” Father Gilbert Medina, St. Peter’s current pastor agreed. “This moving and beautiful procession of the iconic Jesus carrying His Cross has been for Filipino Catholics a source of faith and hope for more than four centuries … I have admiration and love for the Filipino Catholics. What impresses me more is that they live their faith throughout the entire year in devotion and humility to the Lord – right here at St. Peter.”

That was evident when Father Connery asked Ligaya to acquire the Black Nazarene statue in 2017. She remembers thinking he meant a little one. But he said, “No. I like the bigger one,” not realizing exactly how large it was. He referred to the life-sized kneeling Jesus, carried on a wooden cart. She laughed and wondered how she would achieve the tall order, never doubting she would. First, she had to find someone to carve the statue and then ship it to the U.S. and get it through customs. She assigned her husband, Romy, to the task.

That June, he left for the Philippines with a few ideas. He found a sculptor in Bulacan to carve it out of the local kamagong wood, akin to the original dark mesquite, which gave the statue the nickname of Black Nazarene. The sculptor would even hand sew the clothing. 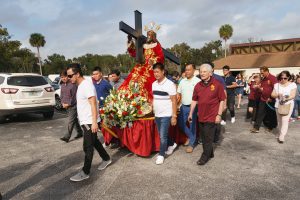 Ligaya felt she owed it to the Black Nazarene because she asked God to help her bring her four children to the U.S. years ago. She prayed to Jesus Nazarene and felt He had granted that wish. She said she thought, “You bring me here to the United Sates and now you want to come here. It’s like a challenge. It was a miracle he gave my family.”

Her family in the Philippines and the U.S. came together to purchase the statue. Others from the parish donated to assist with airfare. The statue received a proper welcome at its home at St. Peter Aug. 6, 2017.

Since then, almost 400 people come from near and far to pay homage and celebrate the Traslación each second Sunday in January. This year, on Jan. 12, pilgrims came from as far away as Las Vegas and New York. Some years the community even processes with it to the local Earl Brown Park on Good Friday. It is a visible manifestation of the faith.

Spaniards brought the original image of the Black Nazarene to Manila in the mid-1600s, carved by an anonymous Mexican sculptor. Partially destroyed in 1945 during the liberation of Manila in World War II, the Archdiocese of Manila commissioned a renowned Filipino saint carver, Gener Manlaqui, to sculpt the present day replica, using the original head. The statue survived two earthquakes, fire and floods and is thought to grant special favors, although no miracles have been confirmed by the Magisterium. The Filipino people connect the statue’s sufferings to their own—the reason for their avid devotion. 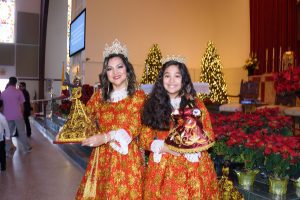 St. Peter parishioner Marichu Abando helps coordinate the annual event from Don Bosco Social Hall to the church. She remembers attending college in Manila and going weekly to the basilica with her classmates. “To be closer to the Black Nazarene and introduce it to my own children is important,” she said. She tells her children, “The devotion increases our spirituality so we are closer to our Jesus, our Savior.”

Romy Cortez also attended the church weekly, living close by in his youth. He recalls the crowds gathering every January. Yet he says his devotion is stronger since Father Connery asked his family to bring the statue to St. Peter. “I feel blessed because I believe this statue is miraculous in Manila,” he said. “That is why I brought it here. We have a lot of sick parishioners.”

Jan. 12 was the ninth day of the customary novena, which takes place in pilgrim’s homes. That day, Ligaya Cortez’s heart was full. “I am thankful for God, for everything He’s given me. I believe in whatever His plan is and I will be there and praise Him.”

By Glenda Meekins of the Florida Catholic January 22, 2020