Community witness shines forth in Rite of Election 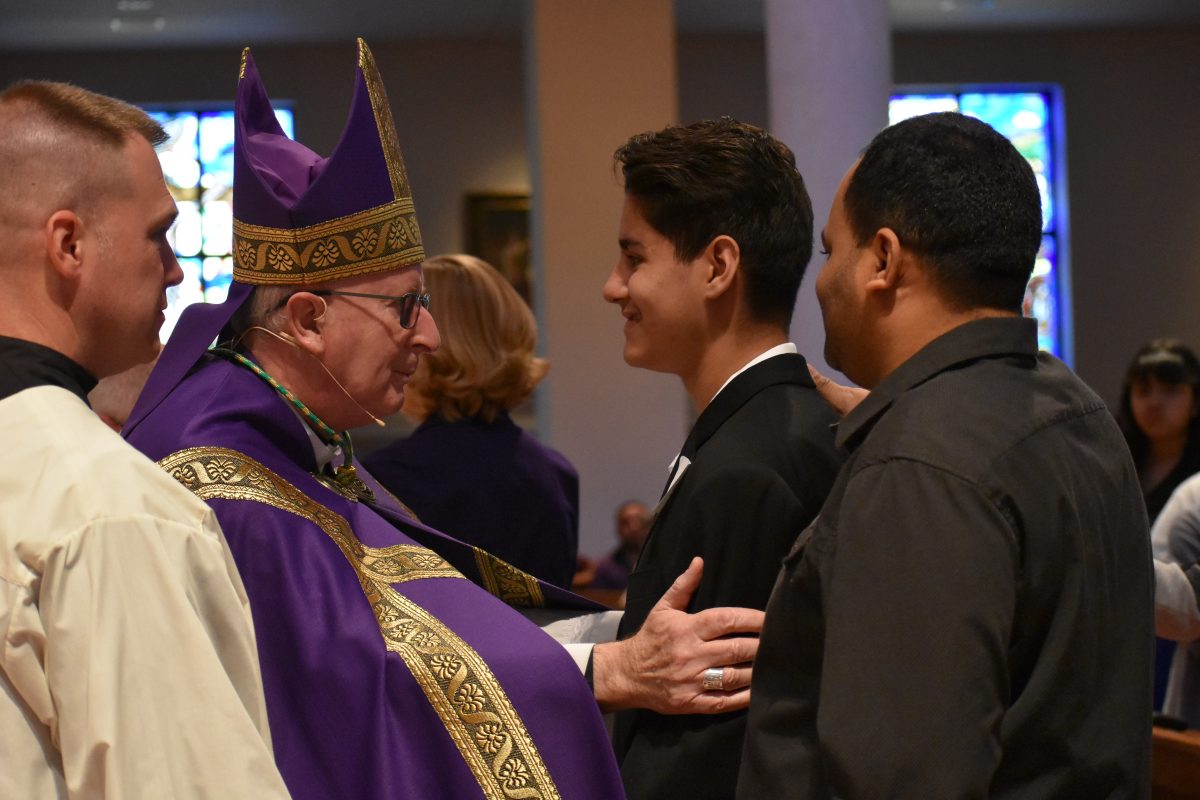 The Basilica of the National Shrine of Mary, Queen of the Universe teemed with joyous celebration as young and old came before Bishop John Noonan for the Rite of Election March 1. Catechumens shared their stories, pointing to the importance of living witnesses in their lives who brought them to that moment.

Bishop John Noonan spoke of the beauty of creation and its intimate relationship with God. “Pope Francis reminds us to know our Creator is to know His creation. I am always amazed when I hold a baby in my arms for Baptism  ̶  the beauty and the details of the hands, the fingers and the nails  ̶  they are so perfect. I am awestruck at God’s creation,” he said. “In the first reading from Genesis, a loving God has created you and breathed life into you, so that you may live your life in a loving relationship with God your Creator.” It is the testimony of lives lived in that union with Christ, that ignited the desire of almost 500 catechumens celebrating the Rite of Election. It was another step on their path toward Confirmation and full communion with the Catholic Church.

At the Rite of Election, catechumens, or non-baptized individuals who desire to become Catholic, arrive with their sponsors who attest before the bishop that these beloved of God are prepared to be missionaries of the faith and should receive the Sacraments of Initiation – Baptism, Holy Communion and Confirmation. It is the Church – represented by the bishop – that chooses or “elects” them to become disciples.

Albert Dekker was among those chosen. Born and raised in the Netherlands; loved and cared for by a close family – the mix of non-practicing Catholics, Protestants and non-believers led him to “never even think” about a relationship with God. He recalled when St. Pope John Paul II visited the Netherlands in 1985, arriving at a somewhat empty airport—such was the spiritual climate of Europe as churches began to close and secularism was on the rise. It was not until he moved to the United States in his late 20s and met his wife, Penny, that he began pondering some of humanity’s deepest questions.

“Penny was Catholic and I was not and that was never a problem,” he recalled. “But of course you talk about it. I was curious. I had always wondered how my father, who is a non-believer, could have been such a good partner with his best German friend, who is a devoted Catholic.” “Bert” and Penny were married at Blessed Trinity Parish in Ocala in 2000. Time passed and slowly the questions persisted. “As rational as I grew up, I definitely sometimes started to think: what is the sense of this life? It’s not the Bentley that you want, or the most expensive golden watch. It’s not important. All the things you chase when you are 20 or 30 – it’s not important,” he said in a testimony before attendees of Christ Renews His Parish, a ministry aimed at renewing the Church and deepening relationships with Christ.

After the birth of their daughter, Penny’s involvement in parish life grew, and so did his. “I really started to feel the sense of community when going to Blessed Trinity – meeting some of our friends and the amount of friends was growing. Seeing children being baptized and going to funerals, I could really feel the strong sense of community, being part of Christian family and friends.”

He noted, “I started to realize we really need to have one religion in the family.” It was at a weekend Christ Renews His Parish retreat and the loving witness and warm reception of the men presenting that eventually helped him to decide to take the leap of faith and begin RCIA (Rite of Christian Initiation of Adults).

For others, it was the witness of youth and young adults living a vibrant life in Christ and exuding His care in their daily words and actions. Josué, an 18-year-old, says it was this faith community and most especially his youth group peers who opened the road to his conversion. Growing up in a troubled home, life was strained. “My relationship was not as close as it is today because I used to believe that God did not care about me or other humans because there were so many bad things happening… I never knew about Jesus and how good He was,” Josué said.

It wasn’t until his late teens he felt something was missing. “I felt an urge to go to church, like a voice nagging at me for several weeks,” he recalled. “So, I asked my parents if they could starting taking me to church and my mother did. We went to Mass a few times and then she brought me to the youth group. I found new friends and became more educated about Jesus and God.” Their witness of love and faith moved him to become Catholic. Bringing his sister everywhere he went, she too came to love the faith and desire Confirmation.

“The Catholic community and my church of Our Lady of Grace (Palm Bay) have welcomed me with open arms and educated me about the teachings of God and Jesus,” he said. “Because of them I have become more open minded and they have given me the ability to share and spread the word of God.” Josué encourages young people to “live out their passions” and listen to the inner voice that draws them to Christ. “God sends me messages every day,” he noted. He is grateful that he listened and responded as did Samuel, “Here I am Lord.”

In the final words of his homily, Bishop Noonan reminded the elect, “Jesus promised the apostles that He would not leave them alone; that He would send the Holy Spirit to pour into their hearts the gifts of wisdom, understanding, knowledge, counsel, courage, piety, and fear of the Lord. Like Jesus’ temptations in the desert, may the Holy Spirit lead and guide you through the dangers and challenges of life. The Lord’s greatest joy is that your life may be complete in living your life in relationship with your God and Creator.” 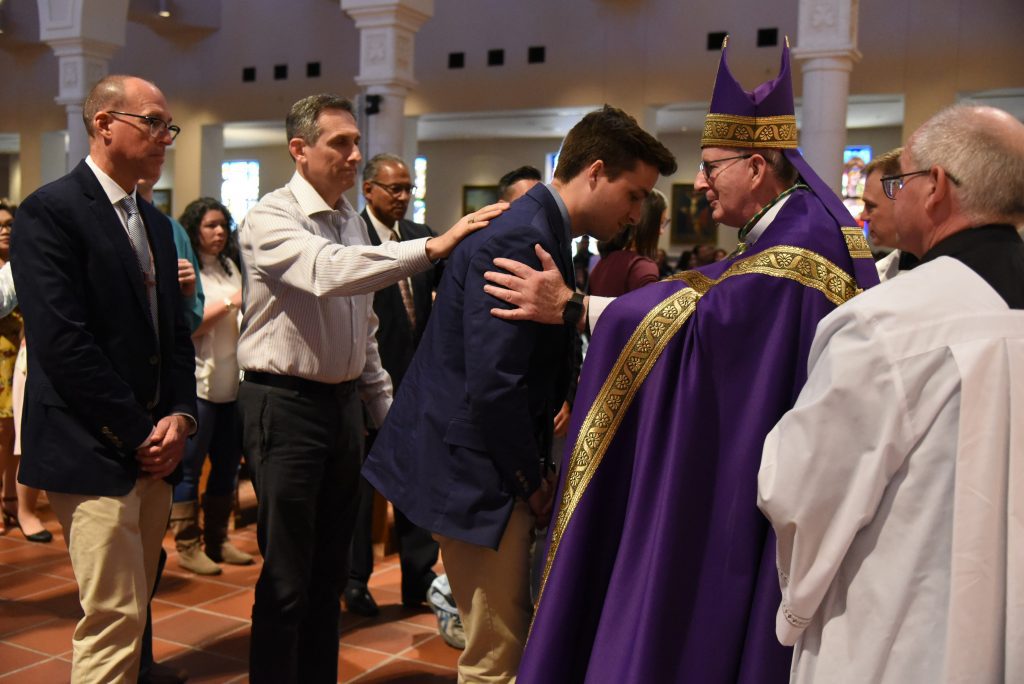 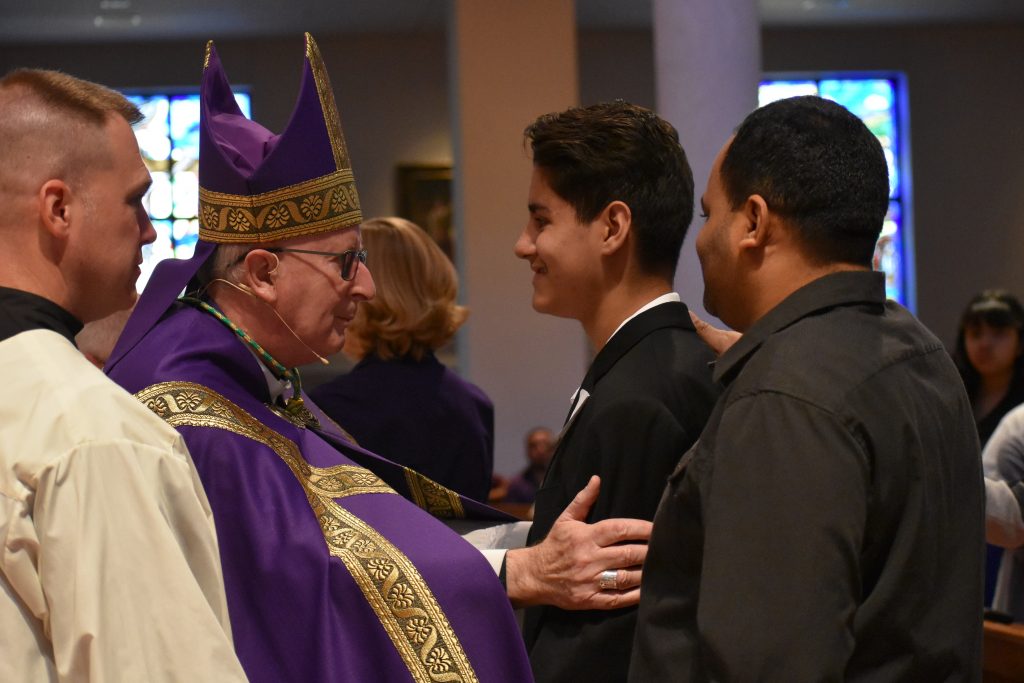 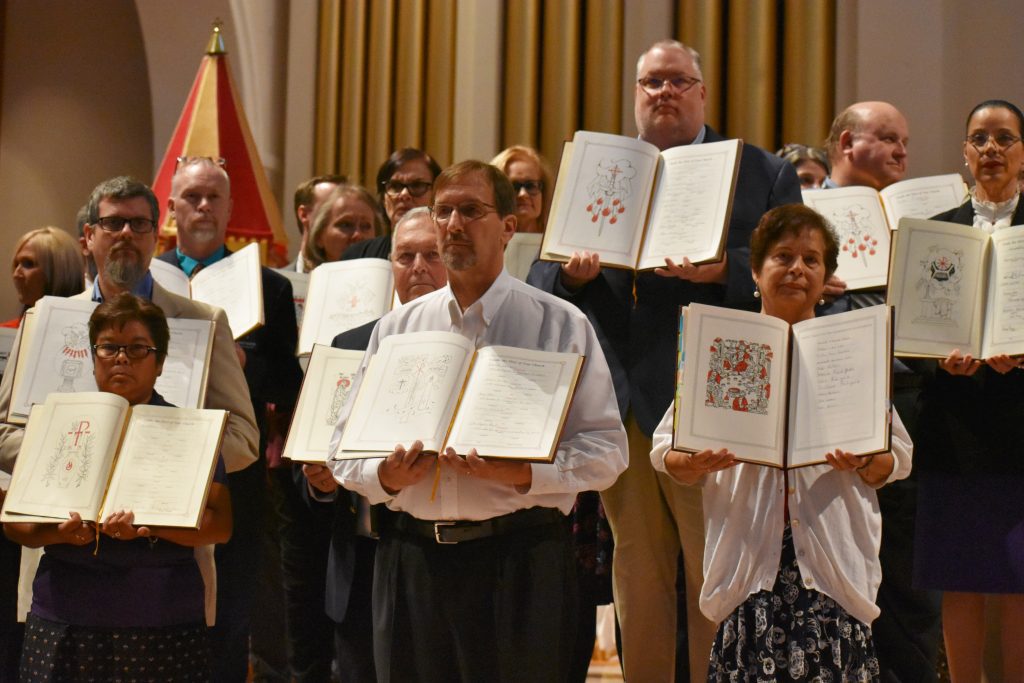 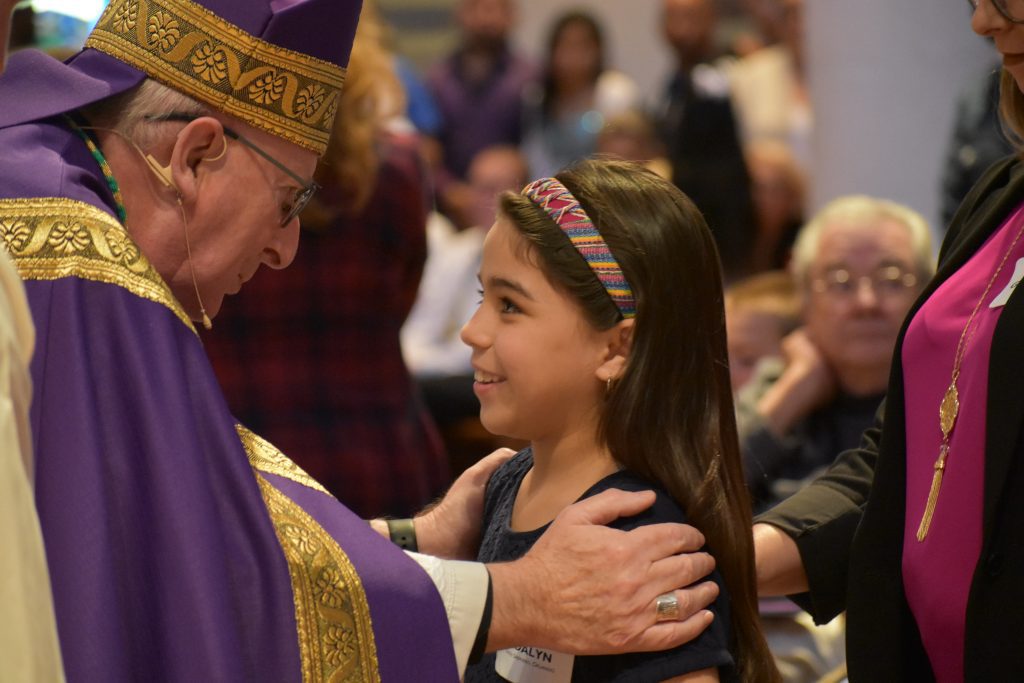 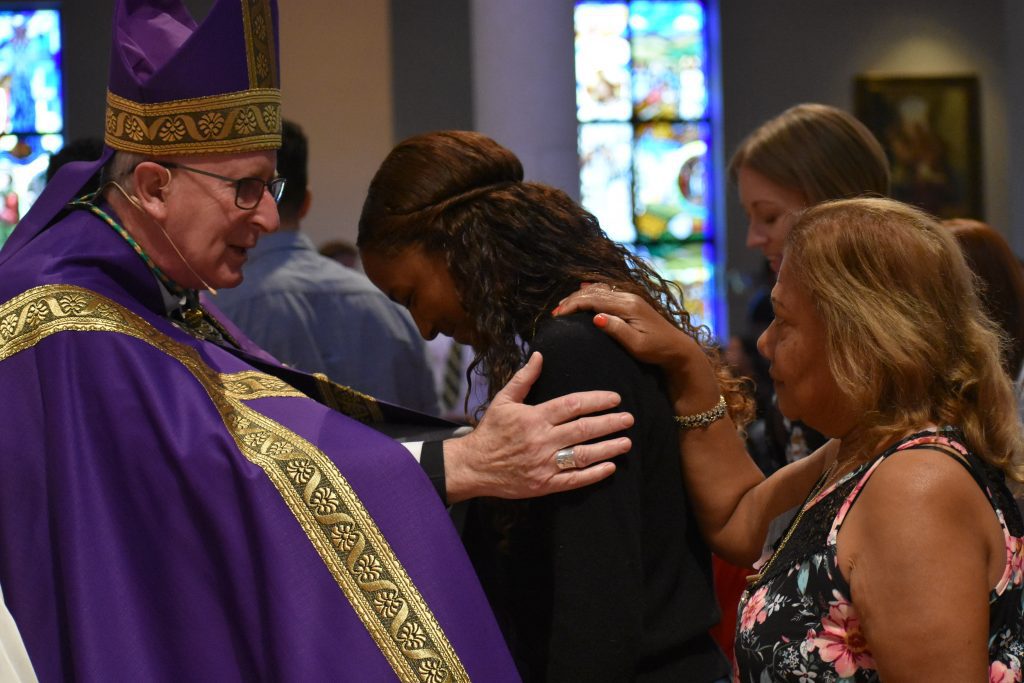 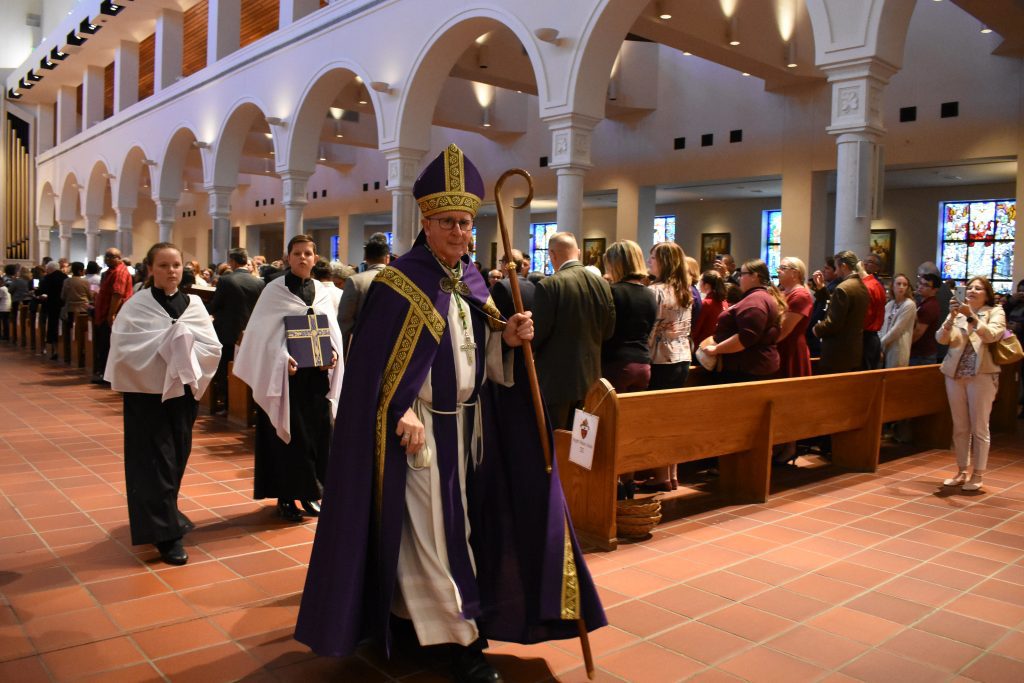 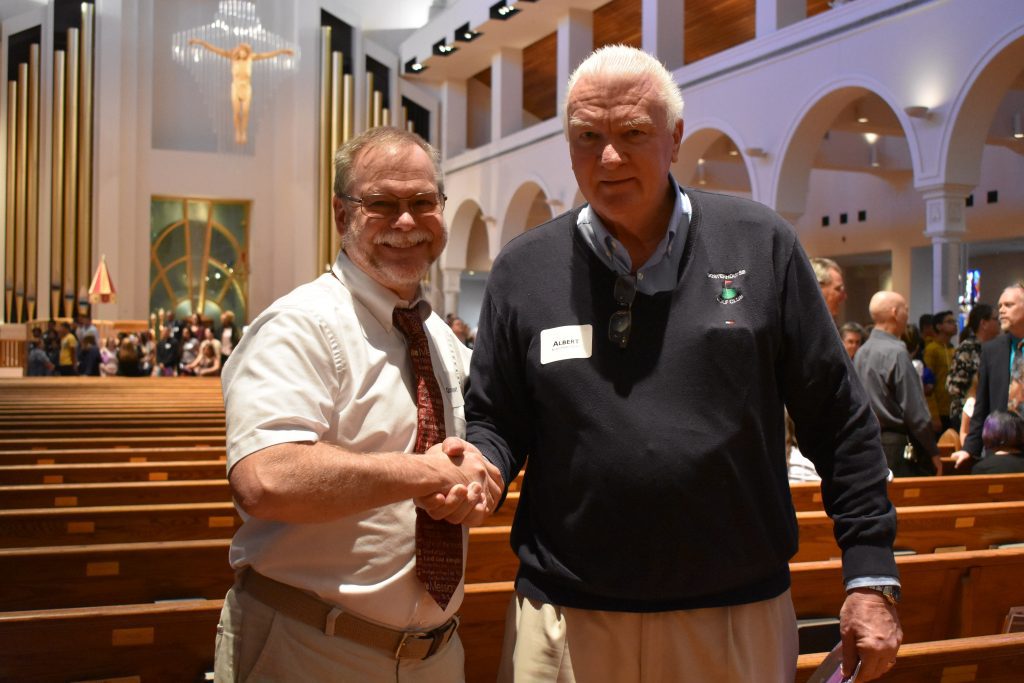 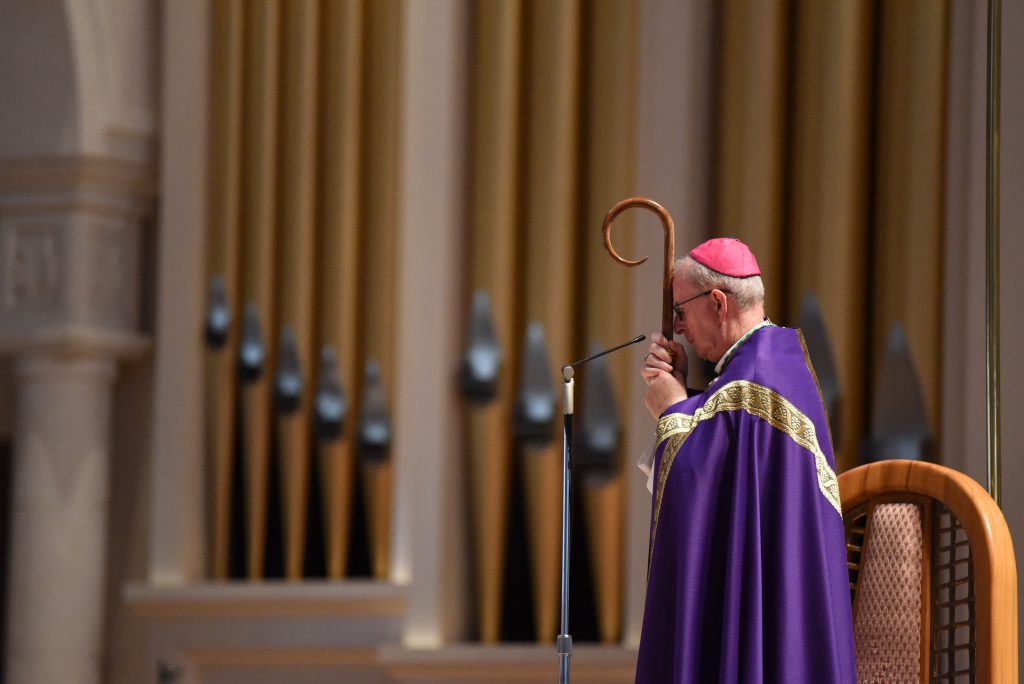 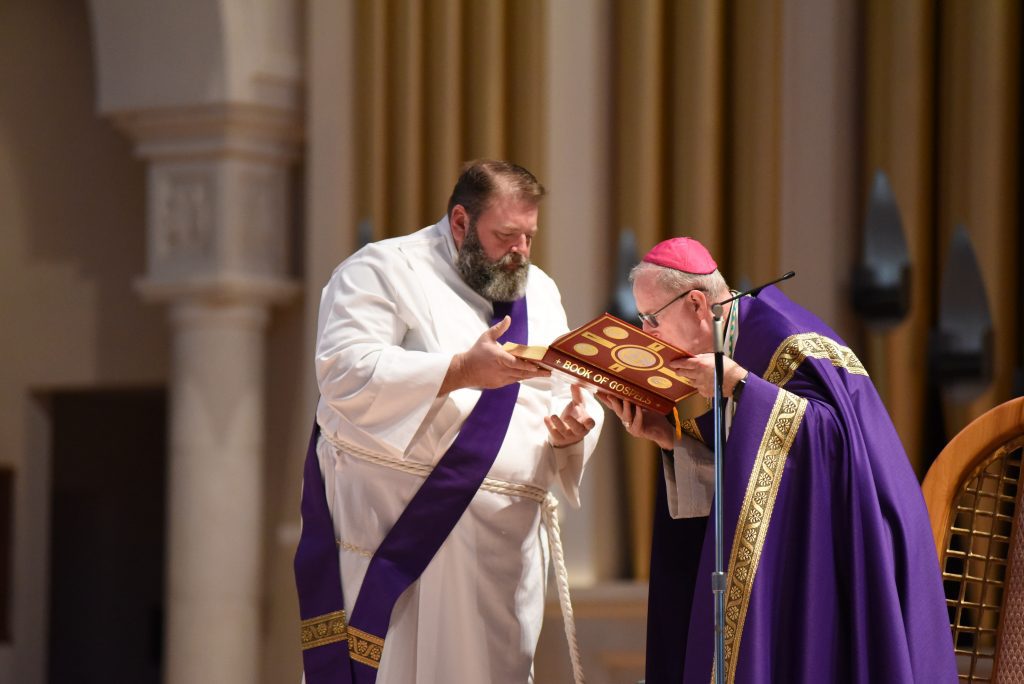 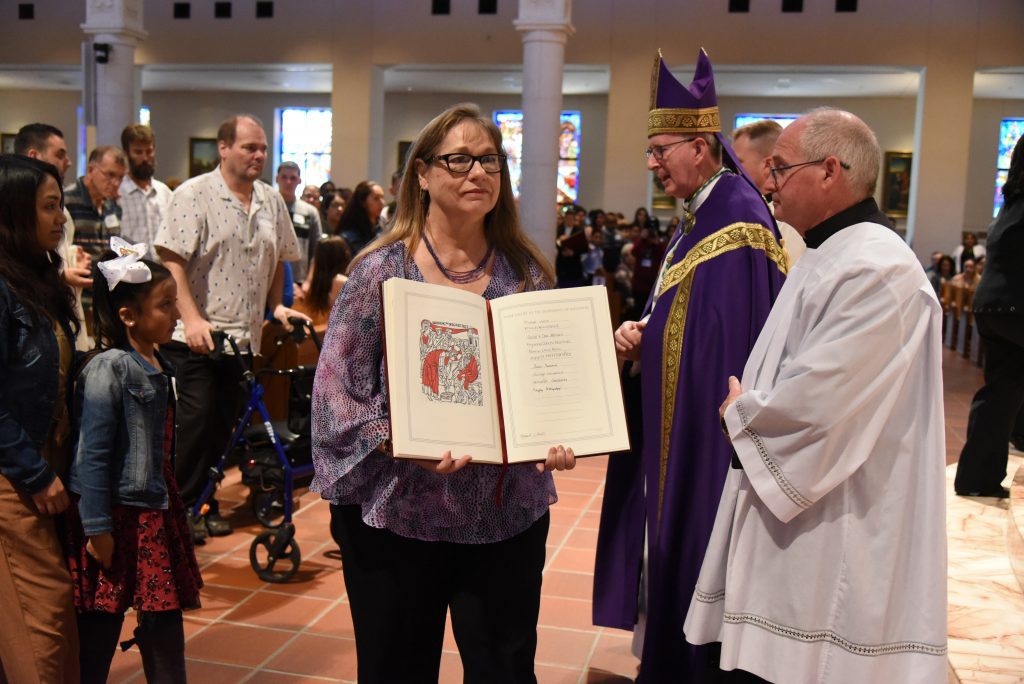 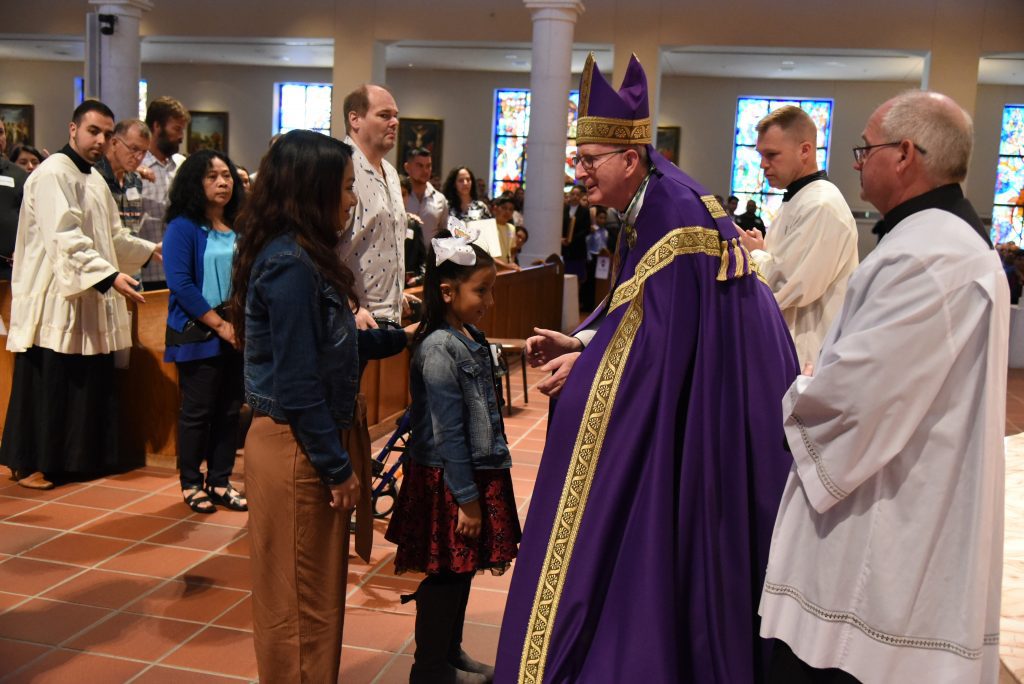 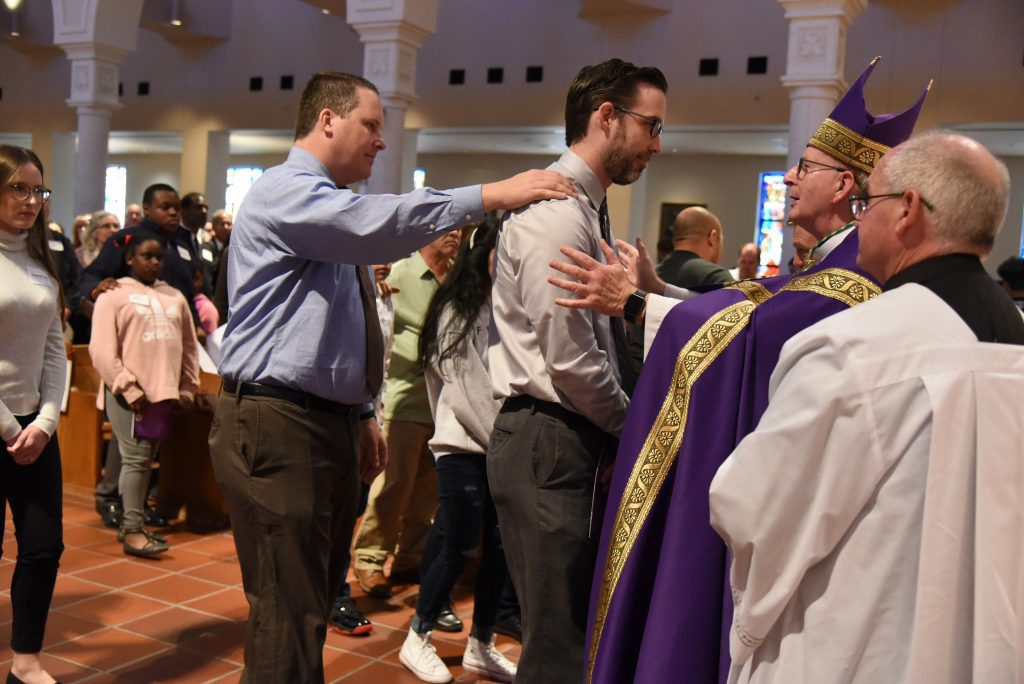