Contemplative musical prayer prepares the way of the Lord 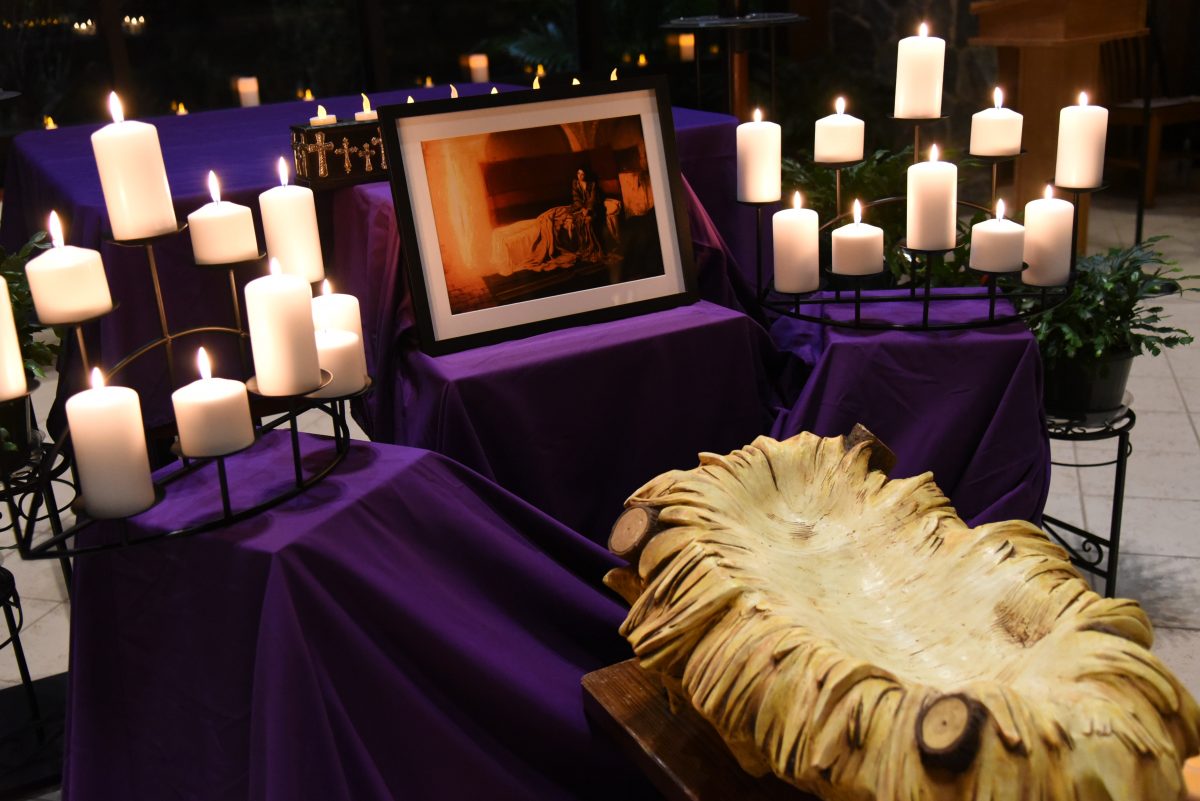 WINTER PARK | Five days into the first week of Advent, San Pedro Spiritual Development Center in Winter Park set the tone as those gathered participated in a Taizé prayer service. The soft repetition of sung verse carried those present into an almost Ignatian experience of Scripture, allowing the imagination to place them at the foot of the manger, expectant, humble and joyful. 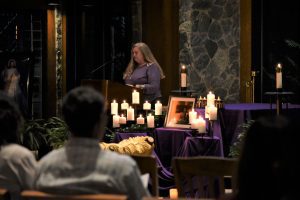 Taizé prayer comes from an ecumenical community of monks established in Taizé, France in 1940 by Roger Schutz. Inspired by the Gospel lessons of reconciliation and love for one another, the community still commits to its mission of peace and justice. The prayer is a meditative combination of chanted music and read Scripture. The repetition of verses such as “Sing out, my soul. Sing out, my soul. Sing out and glorify the Lord who sets us free” lulls the participant into thoughtful prayer. Readings accompany the prayer and on this evening, a life-size empty manger lay surrounded by candles, anticipating the Christ child. The natural setting of San Pedro’s Mary, Mother of God Chapel, enhanced the experience with its large glass wall behind the altar, bringing the forest indoors, allowing the group to sink further into the spiritual dialogue.

The prayer recently returned to San Pedro after being absent several years. Kimmy Zeiler, San Pedro’s program director, said people in the community had missed it, so she brought it back. “It’s wonderful that we can do it during Advent and Lent to really enter into that season and make it liturgically appropriate and sing the hymns for that season,” she said. Personally, she noted the prayer’s “meditative and peaceful” style brings her to a place of peace. “That is when we can really enter into that waiting for the Lord and prepare our hearts for His coming.”

Mother and daughter musicians, Kathy D’Agostino (piano/vocals) and Sarah (vocals), from St. Stephen Parish in Winter Springs and Craig Thomas provided a contemplative respite from what the secular world reduces to the busiest time of the year. Thomas, whose family converted to Catholicism in 1974, is a parishioner at St. Margaret Mary. A master of multiple instruments, during the service he played the bass viola de gamba, baroque flute, and alto recorder. 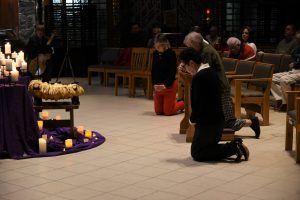 “I have a real musical connection to (Taizé) because it seems that all the music is based on Renaissance and Baroque progressions, so the instruments I play fit in really well with it,” he said. “Spiritually, I feel like it’s so good because the people that come to a Taizé service are people who really want to be there, so you just experience people focusing on God and Jesus and that makes me very emotional. It really does,” he said as his eyes welled with tears. “It makes me feel closer to God and more prayerful when all these people around me are very focused on God.”

In a world where purchasing of gifts, decorating trees and getting photos with Santa tend to overshadow the season’s true meaning, the chance to prepare the heart for the coming of the Saviour is a gift. Early that morning Jeanne and Jimmy McKnight brought down all of their Christmas boxes from the attic and planned to decorate the house. The day soon became cluttered with life’s demands and by late afternoon, the Most Precious Blood parishioners had not begun with the decorations. So they consciously made a choice to “do something” for the spiritual preparation of Advent rather than the “material preparation”. Both were grateful for their choice.

This was their first Taizé experience. Jeanne was somewhat familiar and had longed to attend such a service. “I found it to be really beautiful. The repetition of the song’s verses made it more meaningful.” She added, “I almost passed on the opportunity to go up and kneel in front of the empty manger because I could see it from where I was sitting, but I’m really glad that I did because that just bowled me over. Just kneeling there in front of it, without Jesus in it—it just brought tears to my eyes. I found it very moving.”

“I didn’t know what to expect,” said Jimmy. “What we found was a prayerful contemplation of the season. The live music was great and the voices were phenomenal. I liked everything about it.”

By Glenda Meekins of the Florida Catholic December 11, 2019