Convalidation: A journey to covenantal love 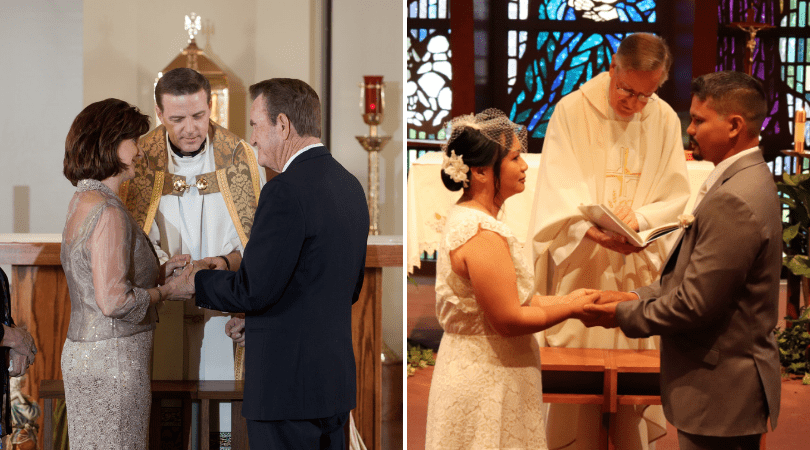 ORLANDO | Kimberly and Amon Guerrero met in Guam soon after high school. They had dated for six years when Amon, a Lieutenant in the Army stationed in Ft. Stewart, Georgia, was deployed to Iraq. It was May 2002 and, “Tensions were high on the world stage and talks of war were going around,” said Kimberly. “So we decided to marry before he left.” Although they were raised Catholic, the precipitous decision did not leave enough time for a Church wedding, so they headed to the courthouse. “No special dress or flowers and our witness was the judge’s administrative assistant,” she recalled. It would be 16 years before the Guerreros would convalidate their marriage in the Catholic Church.

Convalidation is the name given to the ceremony that elevates a civil union to a Sacramental Catholic marriage. Convalidation ceremonies are necessary for couples seeking the Sacrament of Marriage who were previously married civilly. It involves the nullification of any previous marriages because, for Catholics, a marriage is not just a legal union, but a covenant made between the couple and God. The situations vary, but the Church wishes to accompany all who desire this holy and worthwhile goal.

It was not until Kimberly went to work as a secretary at Nativity Parish in Longwood and their children were preparing for Confirmation and First Holy Communion, that their pastor began “nudging” them. “Learning more, I realized this is a Sacrament and I’ve chosen to be married. Until then we didn’t realize how important it was,” said Kimberly.

Lynda Monckton, director of family ministry for the Diocese of Orlando explains the importance is because, “We are called to a total self-giving in every aspect of life (when we commit to the Sacrament of Marriage).”

Code of Canon Law states that a valid Catholic marriage requires capacity (emotional maturity and stability) and freedom from impediments (such as a previous marriage); consent (free, faithful, commitment to a lifelong union, open to new life.); and canonical form, meaning the couple is married in the presence of the proper Catholic clergy and in the proper location. Pope Francis, in his General Audience in St. Peter’s Square in May 2016 noted, “Because the marriage covenant and the Church are inseparable, every time the covenant is lived faithfully as a sacrament, the life of the Church is enriched.”

“I think knowing that the Holy Spirit is now with Amon and me in our marriage … that thought alone, I feel, has strengthened our bond even in rough moments more so than in the past,” said Kimberly. “I think it also has set a positive example for our children in how we live our faith.” The two were able to celebrate their convalidation ceremony—this time in the presence of family and friends.

The Guerreros’ story is a famliar one and the process was fairly simple. For Cindy and Roy Gainer, it was more difficult, but both agree it has made their marriage stronger. Cindy was raised in the faith and had been married civilly, then divorced. Her husband, Roy, was previously married in the Baptist church. It was a faith study that brought to light the shocking realization that their “blessed” marriage was not a Sacramental marriage. She admits, “I didn’t know my faith. I came back to the Church and I was receiving Eucharist and going on my way as a normal Catholic.”

She went to the annulment advocate at Most Precious Blood Parish for answers. The advocate explained that Roy was not free to marry and he needed an annulment before their marriage could be convalidated because the Church recognizes Christian marriages as valid. Cindy required a dispensation for her previous civil marriage. She admits she was angry, didn’t understand and wanted to make it right. Cindy went to her pastor, who gently explained, “That is Canon Law. You were misguided and God knows that. Pray about it.”

Her marriage outside the Church meant she should not receive the Eucharist until it was convalidated. In prayer and through tears, she told the Lord, “I can’t do this. I am so sorry God. I am not in a state of grace with you.” She asked for God’s guidance and told Roy, “We’re going to worship together. We’re a married couple and we have to do this together.” Roy fully supported her acknowledging, “I can’t be a stumbling block to you and your faith.”

The couple prayed and took studies together to strengthen their marriage and learn more about Church teaching. Cindy attended daily Mass every day during the 2.5 year process, refraining from Eucharist. Roy began participating in the celebration of Mass on Sundays. “It brought Roy and me closer to the Lord as a couple… as a family… to evangelize,” said Cindy. “God’s given me strength I never thought I had.” Together the two would sit during the Eucharistic feast and pray the Act of Spiritual Communion together.

Cindy also went on a pilgrimage to the Holy Land. “I walked all the way to Calvary and could not receive the Eucharist, but I walked a special journey,” she said. She feels waiting to receive taught her humility and acceptance of others.

Although Roy never once mentioned converting, on the day his annulment was finalized he sat down with Cindy and told her he wanted to become Catholic. Following their convalidation on the afternoon of January 28, 2012, Cindy and Roy received Holy Communion together for the first time at the 5 p.m. Mass where Roy was received into the Catholic Church through the Rite of Reception.

“Having that marriage in the Church present in both of us… the commitment is so much bigger and better and so much easier,” she says. “I find it gave Roy and me patience for each other. We’re more trusting in situations.”

She added, “The patience, love, obedience and discipline I learned through this whole process has been huge and that, you don’t walk away. You trust that God has a plan for you. I still struggle, but I know that as long as I walk with the Lord, everything’s okay.”

Pope Francis echoes that point. “It is the presence of the Lord, who reveals Himself and the gift of His grace, that will render your marriage full and profoundly true.”

Monckton says, for anyone unsure if they are in a valid marriage or are considering the convalidation process, “Your parish pastor is your first stop.” He will guide you through the process which may include obtaining recent copies of baptismal certificates, speaking to an advocate if there is a necessity for seeking a declaration of nullity for a previous marriage, taking a pre-marital inventory, meeting with a mentor couple, and partaking in a parish or diocesan preparation program. Monckton assures, “If you are feeling called to a Sacramental marriage, the Church is here to walk with you on this journey.”