The crowds of people stretched for several blocks and they followed orderly, prayerfully and faithfully. Who did they follow? Jesus Christ present in the Blessed Sacrament held in a monstrance by our Bishop John Noonan. 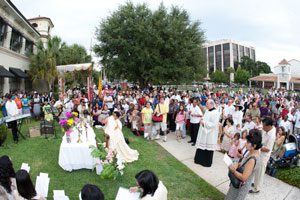 The crowds of people stretched for several blocks and they followed orderly, prayerfully and faithfully. Who did they follow? Jesus Christ present in the Blessed Sacrament held in a monstrance by our Bishop John Noonan.

The Corpus Christi procession, on June 26 in downtown Orlando brought Catholics out of their churches and into the streets where they publicly expressed their faith. On June 26 Catholics celebrated the Solemnity of the Most Holy Body and Blood of Christ, also known as Corpus Christi. It is a day set aside to reflect on the mystery of the Most Holy Eucharist and to bring the faithful to newer levels of devotion to the Real Presence of Jesus Christ.

“We’ve always believed in the Real Presence of Jesus in the Eucharist. Our being here is a witness evangelizing the fact Jesus is truly present in the Blessed Sacrament,” said Mary Ann Johnson. She attended the Corpus Christi procession with her husband, Thomas. They are both Extraordinary Ministers of Holy Communion and both pray each week before the Blessed Sacrament during adoration at their parish, St. John Vianney.

The procession began outside of St. James Cathedral shortly after 6:00 p.m. Diocese of Orlando seminarians carried the canopy which remained over the monstrance and Bishop Noonan during the procession, which continued east on Robinson Street alongside Lake Eola. Police stopped traffic at several intersections as the estimated 1,000 people processed while singing and praying.

The procession route continued to St. James Cathedral School where 8 Altars of Repose lined the building.  Each Altar was decorated by an ethnic or cultural group represented in the Diocese of Orlando:  Brazilian, Haitian, Hispanic, Korean, Filipino, Polish, Vietnamese and African.  The altars were adorned with flowers, candles, pictures of Jesus and the Blessed Mother, flags and items reflecting the particular ethnic traditions. Bishop Noonan placed the Monstrance at each Altar for a short time. Then Bishop Noonan and participants kneeled and prayed in adoration. Choirs sang about our love and adoration for Jesus Christ and a priest led the community in prayers.

“We give thanks to God for the gift of His Son, Jesus Christ who nourishes us through the gift of His Body and Blood. May He continue to strengthen all of us united in faith with His Presence,” said Father Miguel Gonzalez in Spanish at the Hispanic altar.

Peter Tilley, parishioner of St. James Cathedral brought his 7 year-old son, Joseph. This is the second year they attended the procession. “It’s a good opportunity to celebrate with the Diocese, to express our faith in the community outside the walls of our Church.”

Maria Chang, a recent Korean immigrant who has been in the United States for five years, sang with the Korean choir. She used to participate in the Corpus Christi procession in her native country. She said she is happy she can continue this tradition here. “It means we’re part of the Catholic Church. I’m becoming part of God and this American community,” she said searching for the best way to express herself in the English language she is still learning.

Young adults from St. Mary of the Lakes Parish, Eustis participated in the Diocesan Corpus Christ Procession this year, the 3rd year in a row for the group of four friends.

“It’s a good to bring the community together as one body,” said Steffany Smart, 20.

“I love to hear the prayers in different languages and other cultures. It makes me realize how world-wide our faith is,” said Johnny Gonzalez, 35.

“What a truly beautiful gift to see all of us here, different languages but one faith. Thank you for being here to celebrate the Body and Blood of Christ,” said Bishop Noonan after the Benediction that concluded the Corpus Christ Procession.