Couple reflects on 75 years of faith and family 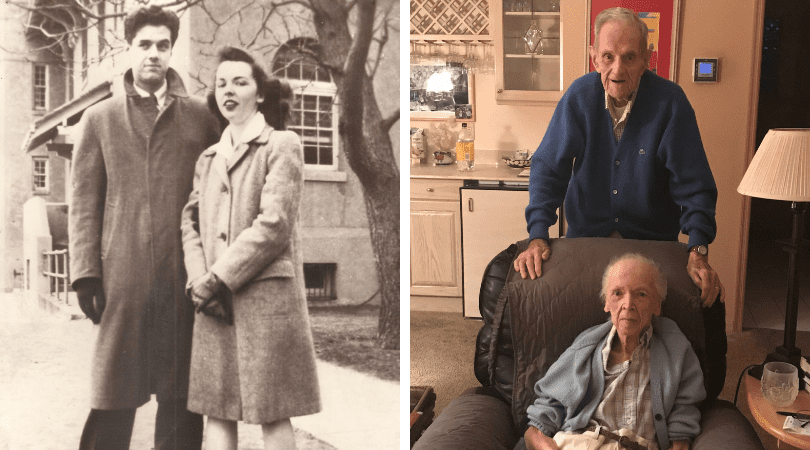 ORLANDO| 75 years ago, when a gallon of gasoline cost 15 cents, the Glenn Miller Orchestra was topping the charts, and the United States was in the midst of the second World War, James and Ethel Doyle said, “I do” at St. Mary Magdalene Parish in Springfield Gardens, New York. Many years later, the couple are now parishioners at Nativity Parish in Orlando. Having celebrated their diamond anniversary on October 3, James Doyle reflected on their lifetime together, which has produced six children, nine grandchildren, and two great-grandchildren. “It was true love, for sure,” he remarked, adding that their Catholic faith has always been a key part of their history.

Love and faith may have been the only constants in the early days of the relationship. The couple met at Queens College in New York when they served together as junior class president and vice-president. It wasn’t long before their working relationship deepened to friendship and then to love, but with college-aged men being called to active military duty, their future was uncertain.

“It soon became clear that we wanted to be together for the rest of our lives,” recalled James, “if we survived the war. So, we decided to get married, sooner rather than later.”

After only a short, but happy, time together James was deployed to Brisbane, Australia and later to Manila, Philippines. During the war he studied and annotated aerial photographs of Japanese installations and Allied activities, including photos of Nagasaki and Hiroshima following the atomic bombings. At the end of the war, James and Ethel were reunited and eager to start their family, only to have James recalled to active duty soon after.

“I was fortunate however,” remembered James. “I was assigned to a unit in Frankfurt, one of the few places where officer’s families could join them – which Ethel and our children soon did.”

The couple had six children together, three of whom have already been born into eternal life. After a happy time in Germany, the family settled into their long-term home and family years in Merrick, Long Island, New York. James began his thirty-year career as head of the Catholic Press Association of the United States and Canada. Ethel also worked with the Catholic Press Association as their reading services manager.

“I grew up having visiting priests and others from around the U.S. and globally in the house,” remembered Tom Doyle, James and Ethel’s youngest son and president of Bishop Moore Catholic High School. “Sometimes a visiting priest would celebrate an in-house Mass. These were very special and truly helped me understand how important a personal faith is.”

In his apostolic exhortation Amoris Laetitia, Pope Francis teaches, “In all families the Good News needs to resound, in good times and in bad, as a source of light along the way. All of us should be able to say, thanks to the experience of our life in the family: ‘We come to believe in the love that God has for us’ (1 Jn 4:16).” This teaching has proved to be true for Tom, who says that the importance of faith and family are the biggest lessons his parents have taught him.

“We all were friends. We ate at the table every night for dinner. On weekends we would all eat lunch together. Family time was extremely important. After dinner many nights we would all be in the living room either reading or talking.”

Prioritizing faith and family has seen the Doyles through their early separation due to the war, the tragic loss of children, moves to new countries and states, and the many highs and lows, challenges and blessings that make up a marriage. It is the legacy they are leaving to three generations of family as they continue to live that example each day, just as they have for the last 75 years.

“Through all our years together we have tried to keep focused on our partner’s and family’s health, happiness, needs and desires — with patience, good humor, respect and love,” said James. “It’s been a happy time, and we hope to keep it going for a while.”