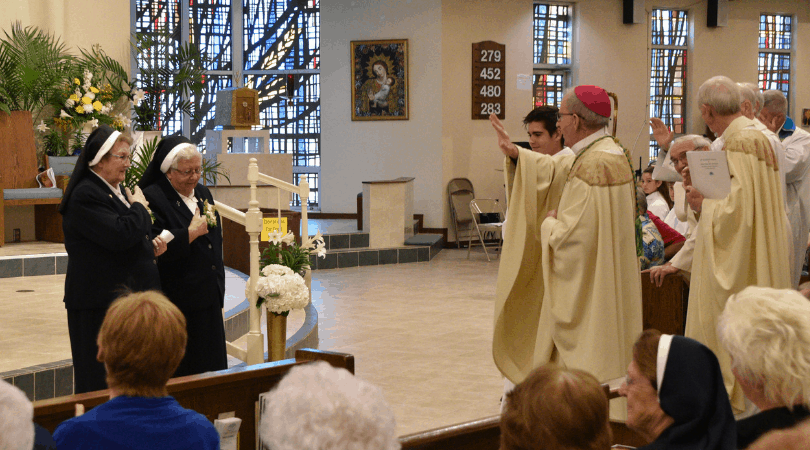 MELBOURNE – On the 60th anniversary of Ascension Parish in Melbourne, parishioners, former and current students and community members offered their final goodbyes to Sisters of Mercy, Immaculata Knox and Joseph Barden. More than 1,200 people filled the church and stayed for the festivities. The sisters left with much more than when they arrived—the love of the community they so faithfully nurtured.

Coordinated by Mary Morano, one hundred volunteers hosted the celebration of the parish’s anniversary and sisters’ dedicated service. The Knights of Columbus and Ladies Auxiliary served food and catered to guests. Music was provided by Orlando harpist, Victoria Schultz, and the Brevard Police and Fire Pipe and Drum. Sister Knox was so moved, she danced an Irish jig and invited pastor, Father Eamon Tobin, to join her.

Dancing right in front of the sisters was local Irish dance troupe, Tir na Greine School of Irish Dance. The parish quartet, Metafour, sealed the evening. The cherished women were sent off with $2,500 raised from parish cookbook sales. The memo noted it was for “the little house on the prairie,” referring to the small cottage awaiting the sisters in Ireland.

Mary “Maybelle” McGee, a 97-year-old parishioner, had not left her assisted-living facility for two years, but made sure she made it to this celebration. Four years ago, after her husband passed and the children all moved away, McGee found herself struggling on her own. Her friend and parish volunteer, Liz Detweiler, spoke to Sister Knox, then in charge of Pastoral Care, to see if she could help. Together, they got McGee into assisted living and Sister Knox visited her every week.

“I wouldn’t have missed it (the celebration),” said McGee who nearly died on Good Friday, just one week prior due to an infection. “(Sister Knox) means everything to me. She was a mentor. She was just wonderful in every way. She cheered me up because she always had jokes. That was her personality.” Thanks to Detweiler, McGee was able to say farewell to the nuns whom she loves so dearly.

Sister Barden wrote a poem on mercy, printed on a commemorative postcard keepsake for attendees. On the other side was a photo of one of Sister Knox’s famous paintings.

Bishop John Noonan concelebrated the bittersweet anniversary/bon voyage Mass. “It’s sad. It’s the end of an era,” he said. “The Sisters of Mercy are part of the foundation of the Catholic school system in the Diocese,” he noted. Recognizing many of Ascension’s current teachers, including principal Anita Brady, were former students of the sisters, he added, “It’s very beautiful to see that they have handed on to them the gift of teaching and the gift of being able to bring the faith to the lives of the next generation.”