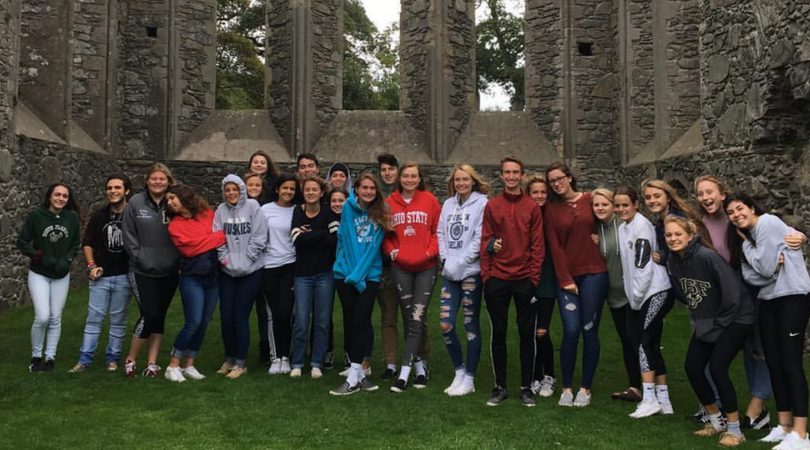 On July 8, 25 students from Melbourne Central Catholic High School set off on a cultural exchange program to Ireland that impacted the way they see the world. The program began eight years ago in partnership with Aquinas Diocesan Grammar School in Belfast, Ireland. MCC had been looking for a partnership and happened across Aquinas’ basketball coach, Joe McAufield, who was hoping to use MCC’s gym while the team was in Central Florida. It was a perfect fit.

“The program enables our students to gain a global perspective,” said MCC President Michael Burke.   “Our partnership with Aquinas School, a school with the same ethos as MCC, has been a godsend to our program. The compatibility of how we approach education makes this opportunity super successful. For our young people to experience firsthand a different culture will set them up well for university and life beyond.”

Juniors and seniors selected for the program travel every other year to spend 10 days immersed in the culture and history of the region, attend classes, and visit key landmarks. In February of 2019, a similar group of Irish students will come to the U.S. As part of the cultural engagement, students stay with each other’s families during their visit.

Henry Fortier, Diocese of Orlando’s secretary of education, made the trip two years ago.  He said, “Given we are in the digital world, our world is very small and we really are a global economy. Our students are competitive with people around the world. Travelling helps them gain an appreciation for other cultures and societies. It stretches their mind to realize God created a really different and diverse world. And it’s another step in helping the students appreciate diversity and moving outside of themselves and what they are familiar with.”

Junior Brendan L. was on the Ireland trip and agrees. “The trip has changed my life by opening me up to a new culture and the beauty of the world around me,” he said.

Students went to famous castles, St. Patrick’s gravesite, the scenic Antrim coast, and even enjoyed high tea. Perhaps one of the most impactful sites toured were the Peace Walls that still represent the division between the neighborhoods of Nationalist Catholic’s identifying as Irish and Loyalist Protestant self-identifying as British. Despite the 1998 Good Friday agreement, which put an end to the violence plaguing the country for almost 40 years, the walls remain.

Claire H., another junior on the trip said, “It is nothing like anywhere I’ve ever been before.” The trip invited her to see the world and the church beyond her neighborhood, in a global way.

By Glenda Meekins of the Florida Catholic – September 19, 2018