Diocesan Catholic Schools Unite to Raise $18,500 for Family in Need 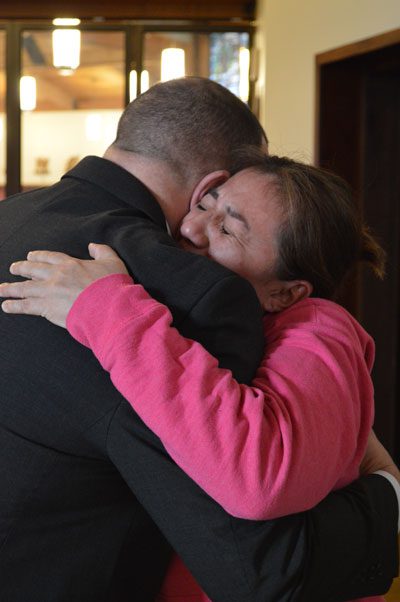 In Matthew 25:40, Jesus said, “Amen, I say to you, whatever you did for one of these least brothers of mine, you did for me.” The Diocese of Orlando Catholic school community truly heeded those words when tragedy struck one of their own.

On Oct. 10, days after Hurricane Matthew ripped through Volusia County, Jose Angel Barrios, a fourth grade student at Lourdes Academy family, died from carbon monoxide poisoning from a generator being run in the back room of the small home he shared with his parents, Pedro and Matilde, and brother, Luiz.

The rest of the family survived, although his father remains hospitalized from complications of the accident, but were displaced. His mother and brother, Luiz, a second grader at Lourdes, moved to a motel, where they lived for weeks.

In the wake of the heartbreak, Henry Fortier, secretary of Education and superintendent of Catholic Schools, reached out to the school community, seeking help for the devastated family. Within six weeks, students, faculty, administrators, families and the Office of Catholic Schools staff donated more than $18,500 to the family.

Through her tears, Mrs. Barrios, speaking in Spanish, thanked the community not only for the money, but more importantly, for the continued emotional support and prayers they so generously gave.

“Although we have Catholic schools in eight different counties with various demographics, we are one Catholic school family,” said Henry Fortier, “So in that, as they say, when one part of the body suffers, the whole body suffers, when we see the suffering of one family, the Barrios family in this case, we suffer with them.”

“Although this money could never replace a child in any way, we hope that it will at least help in this transition that her family is experiencing at this time.”

Dole and Huerd will assist Mrs. Barrios in finding the best way to use the money. Dole said one of the first actions would be to find an apartment for Mrs. Barrios and Luiz. He added that the money will also help alleviate the financial burden of the loss of her husband’s income. Mrs. Barrios works in housekeeping.

Dole said he was touched by the outpouring of love, not only from his school, but from the schools throughout the eight counties.

“One of the many beauties of being part of a Catholic school is that our students are part of a much larger family,” Dole said. “This gift given to the Barrios family on behalf of our Catholic community solidifies the fact that Catholic schools put what we teach into action.”

“While this act of love will undoubtedly help a family in need, I look forward to witnessing the ways our students continue to positively impact our world.”