Diocese celebrates centennial of Our Lady of Fatima apparition 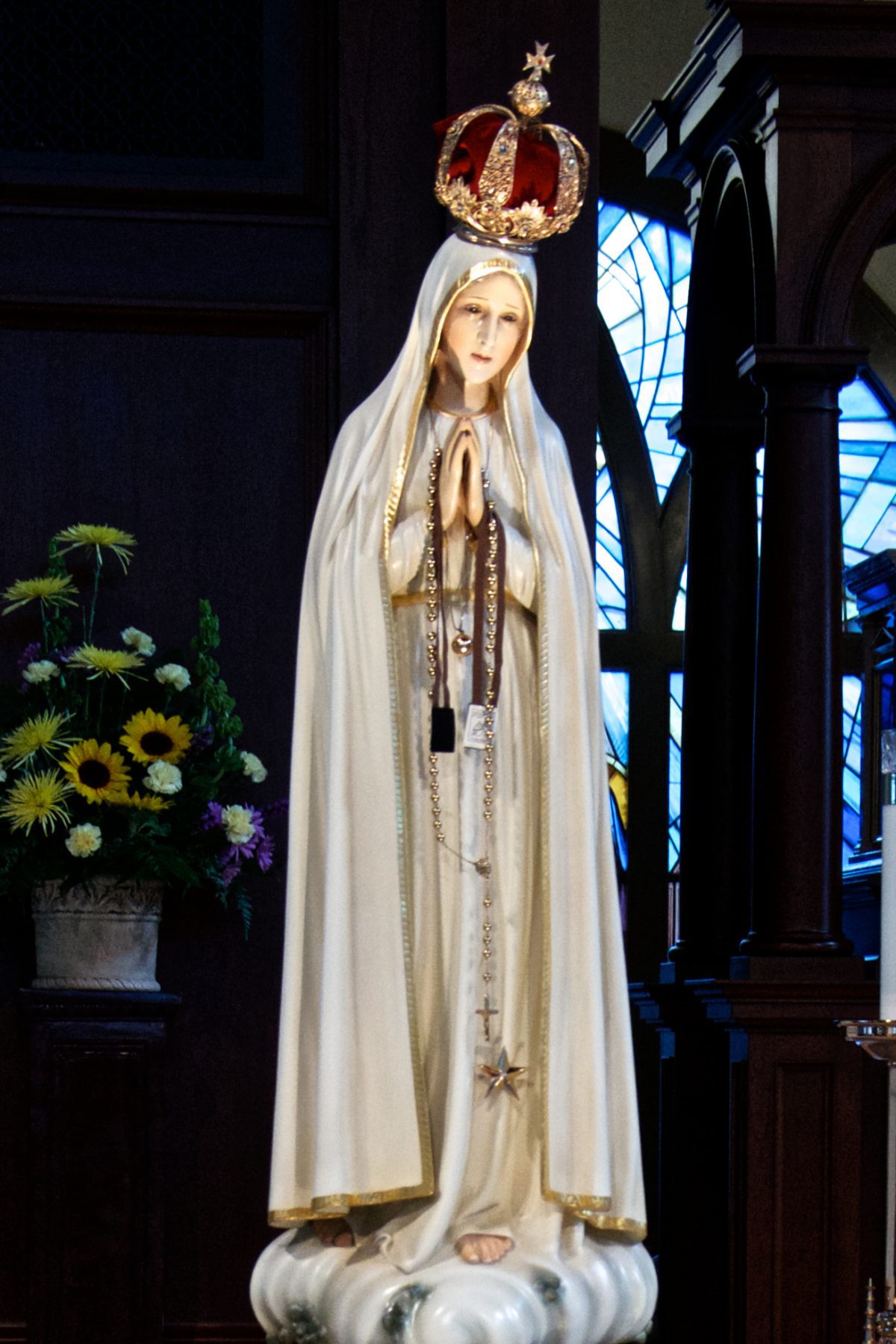 One hundred years have passed since Our Lady of Fatima appeared to three shepherd children in the small town of Fatima, Portugal. During a time of great persecution, Our Lady appeared to three young children: Francisco Marto, his sister Jacinta and their cousin Lucia Santos six times from May 13 to October 13, 1917.

The Blessed Virgin told the children that she had been sent by God with a message for every man, woman and child. She promised that God would grant peace to the world if her requests of prayer, consecration and reparation were followed. The children were asked to pray the rosary and make sacrifices for the conversion of sinners, which they did often.

On the final day of her apparition, Our Lady performed a miracle so that the people would believe the visionaries. An estimated 70,000 people witnessed the sun “dance” in the sky.

Both Francisco and Jacinta who died within two years after the apparitions, will be canonized by Pope Francis on his visit to Fatima on May 13. The Vatican is in the process of the beatification of Lucia, who died in 2005 at the age of 97.

In honor of the 100th anniversary of her apparition, parishes, schools and religious orders are commemorating the miraculous event.

In an overwhelming response to Our Lady of Fatima’s request to consecrate families to Jesus through her, more than 400 parishioners from Our Lady of the Lakes Parish in Deltona completed a 33 day retreat leading to Marian consecration. On May 13, these parishioners will consecrate themselves to Jesus through Our Lady. Stasia Wilczak, who spearheaded the retreat, said, “We are entrusting ourselves to God through the blessed care of his mother. Consecration means that you give everything you are and everything you have to the Blessed Virgin Mary and she will manage your gifts in every blessing.”

Our Lady of Fatima Mission in Orlando, has held several days of prayer and pilgrimages in parishes throughout the diocese with various Marian themes since January, beginning with her divine maternity and concluding with her role as mediatrix of all graces. Their anniversary celebration will end with a closing Mass on Oct. 13.

Cathy Manase, a parishioner from Holy Name of Jesus Parish in Indialantic was moved to organize five night vigils based on the promise made to Lucia “…to assist at the hour of death with the graces necessary for salvation for all those who, in order to make reparation to me, on the First Saturday of five successive months, go to confession, receive Holy Communion, say five decades of the Rosary, and keep me company for a quarter of an hour, meditating on the fifteen mysteries of the Rosary.” The vigils were held at various parishes and were entitled “Night of Merciful Love”.

Several parishes including St. Clare in Deltona, St. Isaac Jogues and St. Joseph parishes in Orlando, and San Jose Mission in Pierson, will be taking pilgrimages to Fatima in addition to other holy sites. More than 100 parishioners throughout the diocese registered for the trips to the Marian sites where they will gather, pray and celebrate Mass. Father Andrew Jurkiewicz of St. Joseph Parish said, “I have a special devotion to the Blessed Mother because she helped me in my vocation, as a protector and in my priesthood.” Prior to becoming a diocesan priest, Father Jurkiewicz formed part of the Order of Discalced Carmelites. One of the Blessed Mother’s requests at Fatima was that the faithful would wear the brown scapular of Mount Carmel as a visible sign of their devotion.

Our Lady of Lourdes Parish in Daytona Beach will be making a small pilgrimage, processing with a statue of Our Lady from the parish to the ocean. Parish pastor, Father Phil Egitto, said there they will give thanks for the Blessed Mother’s protection during Hurricane Matthew this past year and for all of the graces she has bestowed on the church.

At Good Shepherd Parish in Orlando, a church where priests from the Missionaries of Our Lady of LaSalette serve, Our Lady of Rosary Makers ministry hosted “A Morning of Reflection and Rosary”. Our Saviour Catholic School in Cocoa will be marking the day with a living rosary. Fifty-three students along with ladies from the Rosary ministry will hold candles as they create a visible chain of prayer.

While schools and parishes will celebrate May crowning with prayer, singing Marian hymns and praying the rosary, we also commemorate this 100th anniversary with prayers of thanksgiving.