Diocese celebrates Month of the Rosary 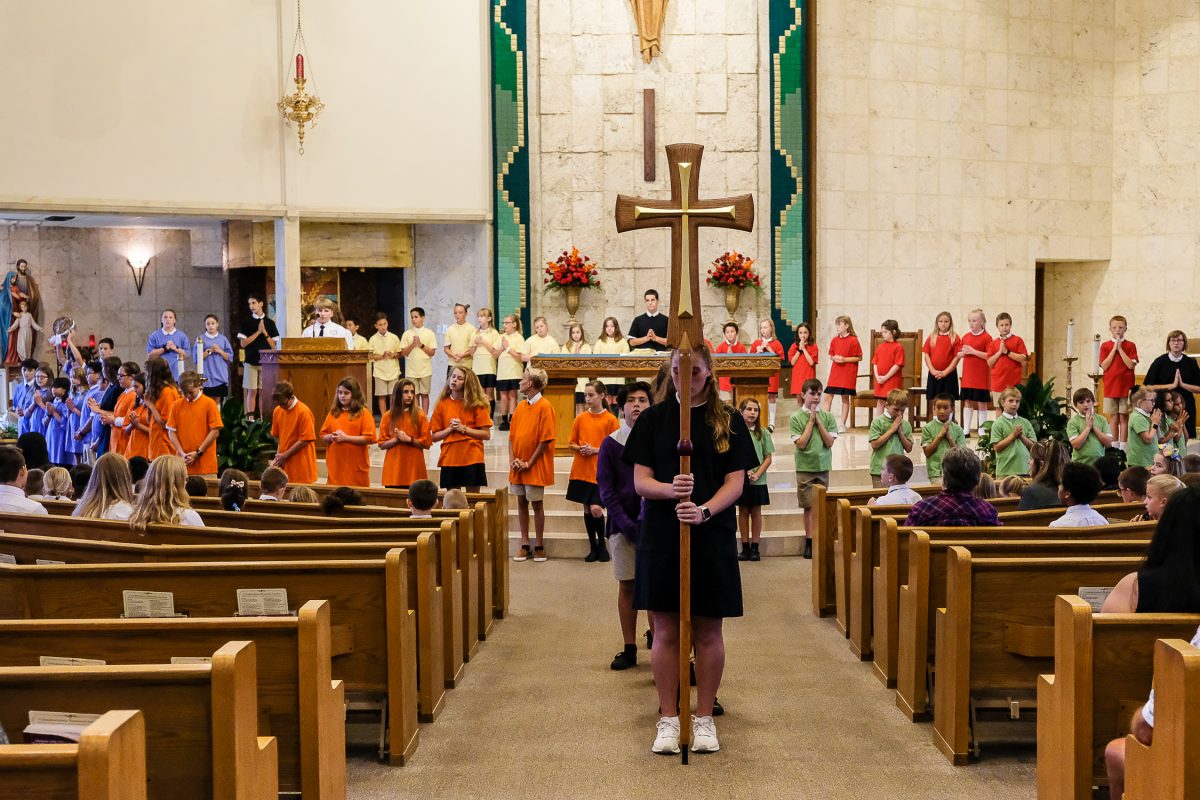 ORLANDO | Suzanne Hall had been away from the church for years, but the rosary changed that when her mother became ill, requiring her to fly to California in 2012. One of six children, the siblings could not agree on their mother’s care. “I was at the bottom. It was a very low period,” Hall recalled.

Seeing no way to find consensus, she went to her mother Lila’s small shrine to the Virgin Mary. Next to a statue of Our Lady were prayer cards and some plastic rosaries. Hall picked up a rosary and said, “I need help! Please help me find a way to take care of my mom.

“I remembered the prayers from long ago and began saying them,” she said, adding a short time later, everyone agreed on her mother’s care until she passed more than a year later. “That was the beginning of my reconciliation with the church.”

Now a parishioner at Our Lady of the Springs Parish in Ocala, Hall seized the opportunity to begin a parish-wide rosary walk every Saturday in October, in honor of the Month of the Rosary. More than 60 faithful have attended, including a local concert violinist who plays the Ave Maria as a segway into each mystery. “It takes me back to all the glory of giving praise to the Blessed Mother for her intervention,” Hall said.

October is known as the Month of the Rosary because Our Lady of the Rosary’s feast day is Oct. 7.  Christians have celebrated her feast day since the 1500s when Pope St. Pius V introduced it commemorating the Christians’ victory at the Battle of Lepanto on Oct. 7, 1571 over the Ottoman Turks. Schools and parishes around the diocese celebrate this month in various way, but all honor Mother Mary.

This year, parishioner Claire Nicholson, of Our Saviour Parish in Cocoa Beach, led Our Saviour students in a rosary at the Grotto of Mary. She told them about the history behind the Feast of Our Lady of the Rosary and the Battle of Lepanto.

It is believed that the rosary came to Catholics by way of St. Dominic who received it from Mary herself to assist in fighting the heresies of the Albigensians. The rosary became a popular devotion and was even used in monasteries during the Middle Ages, substituting the Divine Office for illiterate lay people and monks.

According to the Rosary Center and Confraternity, the sacramental has evolved since its origin. For one, the Hail Mary as we know it today did not exist in its entirety. In later years, the rosary was comprised of the Marian Psalter of 150 Hail Marys and 150 mysteries. These were divided into three groups of fifties dedicated to the Joyful, Sorrowful and Glorious mysteries. Those fifteen mysteries were officially established by Pope Pius V in 1569.The pendant or cross with its five extra beads were also added much later. Pope St. John Paul II added the Luminous Mysteries in 2002.

At Santa Fe High School, Sylvia Loya taught students how to make their own rosaries. Fridays in October, they came to the learning commons to make them. At the end of the month, the rosaries will be blessed at a special Mass.

Living rosaries became a popular in 1826 in France. On Oct. 9, St. Brenden Catholic School students in Ormond Beach gathered in the sanctuary for a living rosary made up of students from various grades dressed in different colors to distinguish each decade. Families and parishioners were invited to participate. The school celebrates the month of the rosary every year.

“Each student, from the youngest to the oldest, makes their own rosary with the help of their teachers and volunteer parents. While we pray a decade of the rosary each morning during the month, it is the living rosary that is the highlight of the month,” said Principal Philip Gorrasi, who added, rosaries are blessed and brought to a final prayer service.

“Students who have been here for years hold their handmade rosaries dear. One of our students made sure his rosary was buried with his grandfather because it was the most precious possession that he had. We teach the children that the rosary is a very powerful prayer and that Our Blessed Mother is there for them always. Her love for them is immense and they can turn to her in good times and in bad and through the rosary, they will receive consolation.”

At St. Jude Parish in Ocala, the Spanish ministry held a retreat day for Rosario de la Aurora. Attendees learned about Mary and the rosary, then prayed all four mysteries using an immense “homemade” rosary created by parishioners and staff the previous year. Participants deepened their relationship with Our Lady through various reflections. This is Francis Sanchez’ fifth year attending. She said the Scriptural rosary (where a Scripture related to the mystery is read on each bead), truly helps one ponder each mystery.

“The day was beautiful, especially the spiritual part,” Sanchez said.

Teachers at Resurrection Catholic School in Lakeland, taught and guided activities about Our Blessed Mother all month, including praying each day during their morning TV show.

“At a young age students at Resurrection learn about Mary, the mother of Jesus, and our Mother too,” noted Principal Deborah Schwope. “We strive to help students understand that she is our intercessor and loves us as much as our early mother does. Passing on the love for Our Lady gives children the foundation for their adult faith. In good times and in difficult times, Mary is there for all of us.”

By Glenda Meekins of the Florida Catholic October 23, 2019