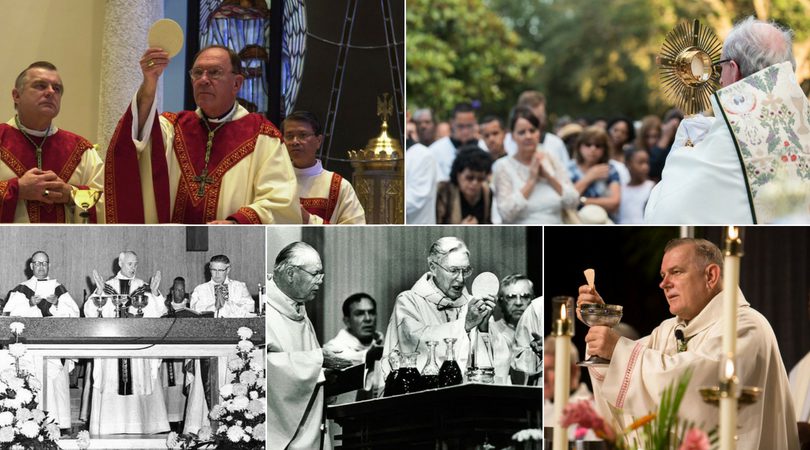 On June 18, the Central Florida community celebrated Diocese of Orlando Day as proclaimed by Orlando Mayor Buddy Dyer and Orange County Mayor Teresa Jacobs. The day commemorates the 50th anniversary of the founding of the diocese in 1968. Over these five decades, the Catholic population has more than tripled and what were once small towns and citrus groves are now thriving communities served by 79 parishes, 12 missions, and 42 schools spread over nine counties. The transformation is due to the many faith-filled parishioners, priests, and religious who have called the Diocese of Orlando home as well as five bishops who have guided the diocese, directing remarkable growth and becoming spiritual leaders for both residents and tourists.

The first bishop of the Diocese of Orlando, Bishop William Borders, chartered new ground. With only about 100 priests for the entire state of Florida in the early 60s, priests from Ireland came to serve the new mission territory. The priests were on fire with the Holy Spirit, but the intense Florida humidity proved to be a battle for clergy used to the cool, rainy climate of Ireland.

“The weather was ferocious hot,” remembered Father Pat Sheedy, pastor of Blessed Trinity Parish in Ocala. “I’ll never forget my first Mass with mosquitoes biting me. I was sweating profusely and I thought Mass would never be over.”

Despite the culture shock, the priests persevered and soon saw the sleepy Central Florida towns transform into bustling cities as first the space program and then Disney World brought a population boom to the area. The priests marveled at astronauts who would come to church for the Sacraments of Confession and Holy Eucharist, not knowing if they would ever return to earth.

As Vatican II gave greater attention to the role of the laity, parish councils and education boards were created and there was the first ever participation of laity as extraordinary ministers of Holy Communion. It was a time of renewal, but the priests had to think on their feet as the Catholic Church rapidly grew and transformed.

“The immense change in the world at the time was in the Church itself, where all the ways we learned kind of got suspended and were no longer the way to go,” recalled Father Paul Henry, rector of the Basilica of the National Shrine of Mary, Queen of the Universe in Orlando. “The new ways hadn’t been developed so you were operating off the seat of your pants to some degree.”

As the population in Central Florida grew, so did the need for social services. A migrant ministry was launched to care for the needs of farmworkers and the working poor in the area. Around the same time, Catholic Charities of Central Florida began to serve people in need. Former director, Tom Aglio, led the agency for 40 years, originally operating out of his own bedroom with one phone and manual typewriter.

“I pretended that I really knew what I was doing and the Lord knows well I had no clue,” admitted Aglio, “I just knew that I was sent by the grace of God to sit in that chair and do something.”

The agency placed more than one thousand babies in adoptive homes over four decades all while birthing new programs like family counseling and refugee resettlement services.

Bishop Thomas Grady continued the work begun by Bishop Borders during a period of even more impressive growth. As visitors continued to flock to Central Florida’s amusement parks and beaches, Bishop Grady realized Florida tourists needed serious attention. In 1975, he named Father Joseph Harte the first minister to pilgrims from all over the world.

“We didn’t have a church when we started so we went to the hotels,” explained Monsignor Harte. “We eventually scattered to one of the hotels in Disney World where we had Masses every Sunday.”

Four years later, plans were well under way for the place of worship located in heart of Central Florida attractions, Mary, Queen of the Universe. In 2007, it was designated a national shrine and two years later, it was granted the title of a Minor Basilica.

Bishop Grady’s compassion also flowed outside the boundaries of the diocese. In 1983, he established a Mission Office to forge a relationship with the Diocese of San Juan de la Maguana in the Dominican Republic.

“The diversity [of our diocese] is a wonderful thing. Praise God that continues,” said Father Peter Henry, pastor of St. Ann Parish in Debary. “It’s full of enrichment. We’re not an isolated Anglo community, but a diocese of great diversity these days- and that’s a blessing.”

Bishop Norbert Dorsey continued to add parishes, schools and health clinics for migrant and farm workers to the growing diocese. Together with Sister of St. Joseph of St. Augustine Elizabeth Stoup, he helped provide a safe and caring environment for adults who are intellectually and developmentally disabled through Bishop Grady Villas. Today Bishop Grady Villas is nestled on eleven acres in St. Cloud and the residents are flourishing.

“They’re very involved in the church… they’re just a real part of the community,” said Sister Elizabeth. “They grew more than I ever believed they would grow and it was just that opportunity to be independent but with some supervision.”

Bishop Dorsey also appointed Dominican Sister Lucy Vazquez as the first female Chancellor of the diocese. Together, they instituted groundbreaking guidelines for the protection of children and vulnerable adults in the diocese and were the first to be fingerprinted under the new program.

In 1996, Bishop Dorsey spearheaded a momentous event at the Orlando Arena. Thousands of people gathered for a diocesan-wide celebration of the Sacrament of Confirmation.

Bringing a strong record of social justice and spiritual advocacy on behalf of immigrants and the poor, Bishop Wenski became the fourth bishop of Orlando. Soon after being appointed he convoked the first-ever synod for the diocese – a coming together of Catholics from throughout Central Florida to discern most pressing issues. In celebration of the diocese’s 40th anniversary, Bishop Wenski designated 2008 the “Year of Evangelization” and organized The Festival of Faith, which drew more than 30,000 people together to reflect on evangelization.

During his time as shepherd of the diocese, Bishop Wenski also established seven parishes and four missions. He oversaw the renovation and expansion of St. James Cathedral and helped establish the Catholic Foundation of Central Florida, Inc.

“I carry with me many memories of this dynamic vibrant and local church,” said Archbishop Wenski, Archbishop of the Archdiocese of Miami. “I pray you remember me as fondly as I remember you and that we never cease to pray for one another.”

Bishop Noonan now serves as 5th bishop of the diocese. He has instituted a new vision, logo and guide: “Teaching and Living the Light of Christ.” While working to enkindling a deeper faith in the heart of his people Bishop Noonan continues strengthening interfaith relationships and encourages prayer efforts with local faith leaders.

“I think the diocese has energy and innovation,” said Sister of Notre Dame Pat Sipan. “We’re not declining, we’re growing, growing, and growing…and it’s got a spiritual dimension that gives everybody a new life and a new energy.”

Mayor of Orlando, Buddy Dyer said he has seen how the diocese has enriched the entire Central Florida community – Catholic and non-Catholic alike.

“Our community is stronger because of organizations like the Diocese of Orlando that are committed to serving residents, both in good times and times of tragedy,” said Mayor Dyer. “For five decades the Diocese of Orlando has played an important role in Central Florida and we’re grateful for its contributions to our region.”

Orange County Mayor, Teresa Jacobs, said “Through the establishment of numerous ministries focused on improving lives, the diocese has helped transform Orlando. The Diocese of Orlando has brought its faith mission to life through migrant services and programs, broad community outreach and support via Catholic Charities, and the founding of one of the most robust parochial education systems in the nation. Through these and other ministries, the spiritual and worldly lives of many Central Floridians have been shaped and improved.”