As part of Pope Francis’ Year of Mercy, deacons from across the globe travelled to Rome in late May for the Jubilee of Deacons. 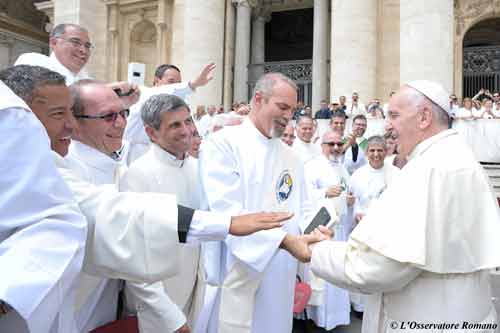 As part of Pope Francis’ Year of Mercy, deacons from across the globe travelled to Rome in late May for the Jubilee of Deacons. The event marked the first time ever a Pontiff invited members of the diaconate to Rome.

The pilgrimage included 24 deacons, four men in formation and family members from the Diocese of Orlando. More than 10 percent of the deacons in the Diocese of Orlando attended the week-long event, making it the largest contingency of any diocese in the United States. They travelled to Rome to be renewed in their vocation.  Pope Francis reminded them that as members of the diaconate, opening their hearts to Christ’s call doesn’t just take place in their assigned ministries, but in everyday life.

“So often we do hospital ministry and prison ministry,” said Deacon David Gray, Secretary of Leadership and Parish Life Secretariat.  “Pope Francis’ message to us is that we can’t be bound by time, the calendar or our own agenda. He calls us to be open to Christ’s call, the surprises of Christ’s presence. Those opportunities come when you’re standing in line at the grocery store. Not when you planned it but when Christ’s time calls for it. “

“I think each one of us, priests, deacons and lay persons, oftentimes we see our identity tied to what we do. I have a checklist of what I want to do today. We miss the blessings and gifts of one another.  You are the icon of Christ the servant,” Deacon Gray added.

The trip was arranged by Deacon Jerry Hempstead, who has been to Rome four times. “I kept the group busy. We were on the go 16 hours per day,” he said.  The group visited the four major basilicas in Rome:  St. John Lateran; St. Mary Major; St. Paul Outside the Walls; and, St. Peter’s. They prayed before the mortal remains of the patron saints of the diaconate, St. Stephen, St. Lawrence and St. Francis, in Assisi, just outside of Rome.

“The beauty of the different basilicas was overwhelming,” Deacon Gray said.

“In this Jubilee Year of Mercy the whole concept is getting off your butt and doing something,” Deacon Hempstead said.  “Every diocese has a holy door,” he added. “On the other side reconciliation is available to all the pilgrims. All day long confessions are being heard.”

Deacon Hempstead said that when the group toured the Sistine Chapel, where up to 2,000 individuals can visit each day, there was a priest in the corner hearing confessions and a long line of penitents waiting their turns.

The group’s highlight was participating in a Papal Mass. Deacons Gray and Hempstead assisted at the Mass, and Father Niziolek concelebrated with Pope Francis.  They each received the Eucharist from the Pope. Father Niziolek, celebrating 50 years as a priest this year, was able to meet Pope Francis and kiss the Papal Ring. He said it was the best present he could have received, according to Deacon Hempstead.

Deacon Heriberto Toledo, ordained a year in early June, met Pope Francis face-to-face.  “He was very natural and down to earth for a man of his stature. “ He was impressed by the number of deacons at the Mass, and the love he felt from them, Deacon Toledo said.  “I needed that for my spiritual development,” he added.

In his sermon to the deacons, Pope Francis said: “One who serves is not a slave to his own agenda, but ever ready to deal with the unexpected, ever available to his brothers and sisters and ever open to God’s constant surprises.

A servant knows how to open the doors of his time and inner space for those around him, including those who knock on doors at odd hours, even if that entails setting aside something he likes to do or giving up some well-deserved rest.

Dear Deacons, if you show that you are available to others, your ministry will not be self-serving but evangelically fruitful,” said the Pontiff.

Being available to others means transforming ourselves, said Deacon Gray. “Through prayer we become more prepared to respond to the call of Christ. One needs to take the time to set oneself apart, to pray and meditate. “

“To be ready to serve, we need a healthy heart: a heart healed by God, one which knows forgiveness and is neither closed nor hardened. We would do well each day to pray trustingly for this, asking to be healed by Jesus, to grow more like him who no longer calls us servants but friends. Dear Deacons, this is a grace you can implore daily in prayer,” the Pope told his audience.

“For all those who attended the Jubilee of Deacons it was a great spiritual blessing. It was like a week-long retreat,” said Deacon Hempstead.