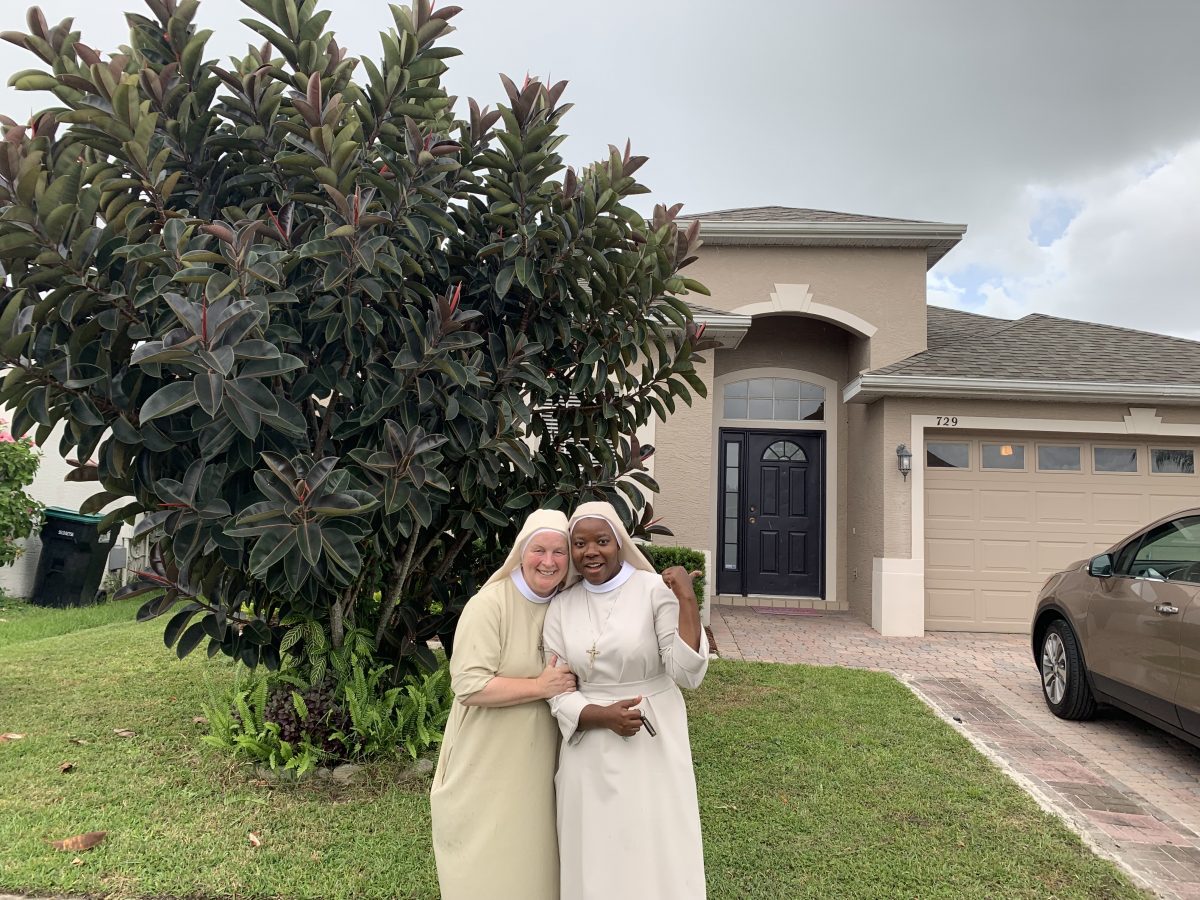 ORLANDO | There is something remarkable about the smiling faces of the Missionary Sisters of the Holy Family that immediately touches the hearts of the people they encounter. At least that was the case for Sister Rose Urbanczyk and Sister Immaculée Nyirasuko, two sisters who recently began serving the Diocese of Orlando. For Sister Rose, born and raised in Poland, all it took was seeing an advertisement for the order in a magazine for her to know that her future would be living as one of them.

“One Sunday, I was reading the magazine and came across the ad containing the name of the congregation, their address, and very short information about it. At that moment, God tugged on my heart and I understood they will become my family,” remembered Sister Rose. “It was somewhere in the middle of my discernment, halfway through my high school; I joined the order right after graduating.”

Sister Immaculée had a similar experience. Born in Rwanda, she moved in the 90s in the midst of the country’s civil war and ended up in Zambia. She soon began attending a parish where Missionaries of the Holy Family served and she was struck by their “extraordinary joy.”

“I wanted to have that too,” said Sister Immaculée. “I would say hello after Mass and then one day they invited me to visit their convent and behold once I saw what they were doing, I fell in love with them more and more. After high school, I wanted nothing more than join them.

The Missionary Sisters of the Holy Family was founded in 1905 in Belarus by Bolesława Maria Lament, declared Blessed Bolesława in 1992. She founded the congregation with a charism for unity during a time the Catholic Church was persecuted in Eastern Europe. Her conviction was to educate and strengthen people in their Catholic faith. Back then, Catholicism was forbidden so she provided religious education underground, in people’s homes, whenever possible.

“She knew very well that if you educate a woman then you educate the whole family and thus the nation and, in this way, she strengthened the Church. She tirelessly educated young women,” explained Sister Immaculée.

Today, the sisters, who number around 350, serve in Poland, Belarus, Russia, Italy, Zambia, Tanzania, Kenya and in the United States in Wisconsin, Illinois and Florida. Their focus is mainly education, health care and parish work. In fact, both Sister Immaculée and Sister Rose studied nursing after joining the order. Sister Immaculée is currently serving as a registered nurse and is also a family nurse practitioner. Sister Rose, though currently serving as a middle school teacher and chaplain at Holy Redeemer Catholic School in Kissimmee, is also a certified nursing assistant.

Since joining the order in 2000, Sister Immaculée has served in Zambia working in the convent kitchens and teaching Sunday school children; in Wisconsin where she served in a nursing home and fundraised for schools, hospitals, and housing in South America and Africa; and most recently, Orange Park, FL where she worked at area hospitals and prepared children to receive their First Communion.

Sister Rose began her ministry as a religion teacher at three different cities in Poland before moving to Wisconsin where worked with young children and later Illinois where she continued to teach and work at St. Mary’s Hospital.

The sisters arrived in the Diocese of Orlando this past August. Given their backgrounds and the various places their vocation has taken them, they have especially enjoyed witnessing the diversity present in the Catholic Church in Florida.

“I’ve met with such kindness and openness from people who immediately embraced our presence here. What I was really taken back by was the diversity in the local churches, so many people of different ethnicities and cultures, yet coming together in prayer and service. How beautiful! I really treasure that,” said Sister Rose, who added that she also enjoys the warm weather immensely after so many years in cold climates.

Sister Immaculée agreed saying, “I love Florida. The Church is so diverse that I feel right at home. The rich cultures of different ethnicities is unbeatable.”