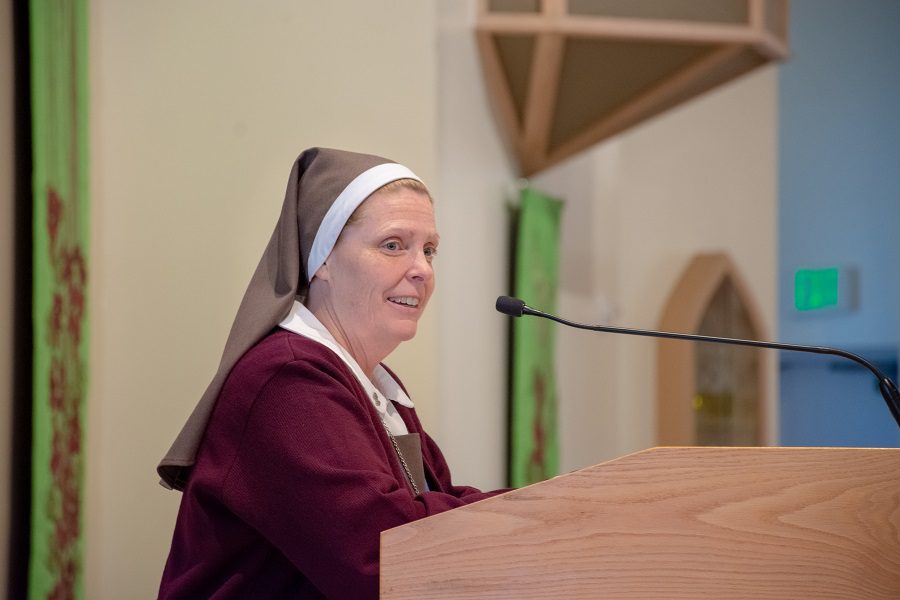 ORLANDO | Gianna Grace Perino fell in love when she was just a child. Despite her young age, the relationship only grew stronger as she grew older, until one day she found herself standing before him in church making her First Profession of Vows to remain his forever. On that day, Feb. 11, 2019, she became Sister Gianna Grace, SCTJM with the Servants of the Pierced Hearts of Jesus and Mary and her spouse was Jesus Christ.

“When we speak about our vocation story with the other sisters, we say, ‘tell us your love story’,” said Sister Perino. “It’s the story of how we met and fell in love with Jesus.”

As the new Associate Director of Vocations for the Diocese of Orlando, Sister Perino is now helping young men and women fall deeper in love with Jesus and discover where he is calling them. She is able to draw on her own experience of trusting the Lord completely with her future.

“I always had a sense in my heart, I always knew, I just felt special to the Lord,” recalled Sister Perino. “I believed that the Lord loved me so much and had a perfect plan for my life.”

Sister Perino was born and raised with her brother in Central Illinois. As she progressed through Catholic grade school and high school, she found herself drawn to the sciences, and she entered the University of Iowa as a biochemistry major. She describes her studies as deepening her faith as she witnessed intelligent design even down to the molecular level. But outside of her classes, college life was more disheartening than she expected.

“I didn’t really like the way people treated each other. Coming into the “real world” out of high school was disappointing. I thought, ‘There’s got to be a better way!’”

She found that better way by transferring to Bradley University in her hometown. There she was able to reconnect with friends she had made on a high school retreat. It was on that retreat, after a tangible encounter with Jesus, that the seeds of her vocation began to grow. Now, back among a faithful and loving community, those seeds began to take root.

By the time she graduated college, having changed her major to English and Secondary Education, Sister Perino knew she was being called to religious life, but she did not yet know to which religious order. She accepted a teaching job at the catholic high school while she continued to pray and discern.

“People gave me a hard time. You go to everyone’s wedding. You are a bridesmaid. All of these things happen around you and you think, ‘Maybe I should do that’,” recalled Sister Perino. “But if the Lord plants a seed in your heart, and He gives you a conviction, why question it? I really appreciate that the Lord gave me the simplicity to know His plan for me was going to be the best plan.”

One day, after several years of teaching, new teachers arrived on campus. They were from the Servants of the Pierced Hearts of Jesus and Mary.

“Once I saw the Sisters, something in my heart clicked. They were beautiful! Their habit spoke a message of love from the Blessed Mother to my heart. That was a huge awakening for me. This was the sign that I’d been waiting for,” said Sister Perino.

Her feelings were confirmed during a mission trip to Miami where they visited the Servants’ Mother House. There she was able to experience the fullness of the charism of the religious order and see how the sisters ministered and prayed together. While praying before the Blessed Sacrament at a Eucharistic Cenacle, Sister Perino knew the Lord’s plan had finally been revealed to her.

“Pretty much the whole way back home in the bus I was crying,” she remembered with a laugh. “I’m sure the other chaperones were wondering what was happening! From that moment I knew the Lord had shown me. I waited for my answer and He showed it to me.”

After that, things moved quickly. She sold all her belongings and moved to Miami to enter with the Servants as a pre-postulant. Three years later, and one week after professing her first vows with the community, Sister Perino began her new role in the Diocese of Orlando’s vocations office. She will lead retreats and discernment groups and be available to lead young men and women as they discern God’s will.

“I hope to fulfill the vision of the Bishop which is really to guide people’s hearts and help them see what the Lord’s perfect plan for their life is,” said Sister Perino. “We can’t love someone that we don’t know. Getting to know the Lord is really the first step in all discernment. There is a God and He loves you like crazy!”