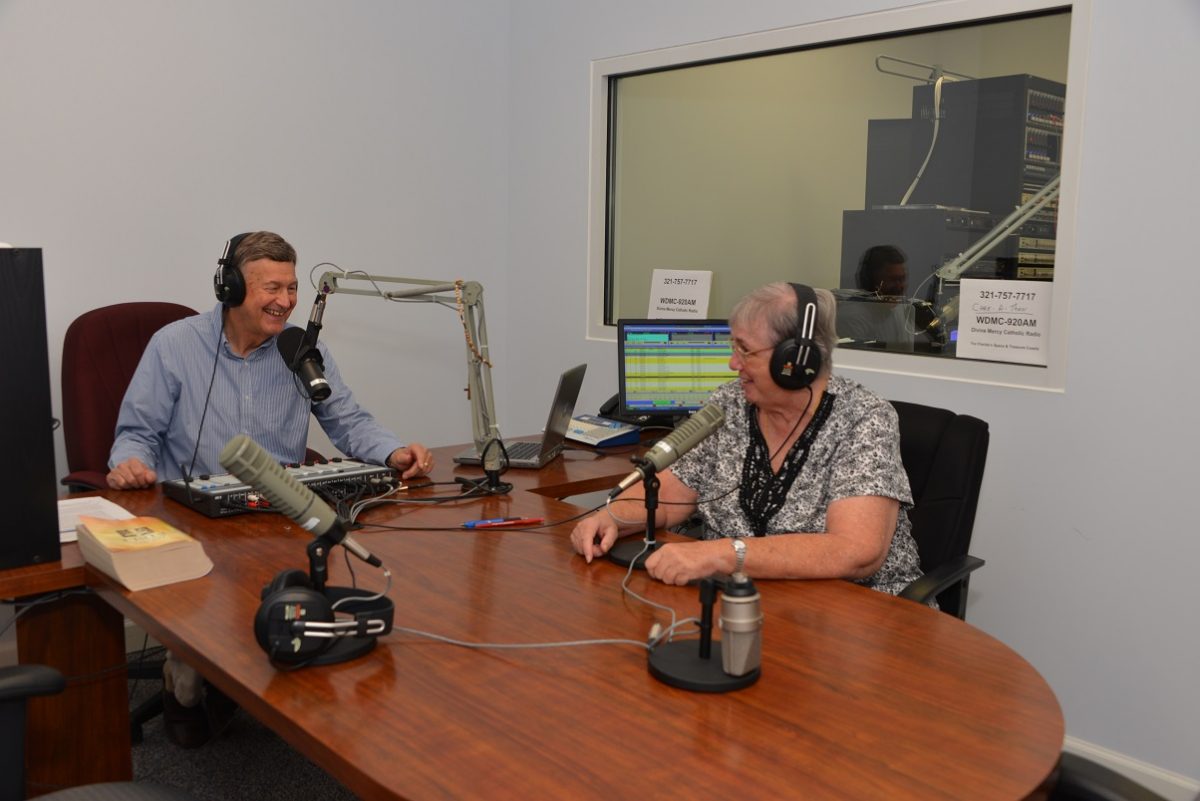 “Wow! We have Catholic radio,” exclaimed Father Thomas Connery, pastor of St. Peter Parish, Deland who was instrumental in the inception of WDMC (Divine Mercy Communications) Radio 920 AM transmitting from Melbourne. “Until now, I’ve had to listen on podcast, but with the new towers – it’s here! Driving in my car – I can listen.”

It’s been a 20 year journey from the desire for a Catholic radio station to Father Connery’s exuberance that three new towers began broadcasting full-time on March 16 to a range far beyond expectations – to East Orlando, Volusia County in the North and Martin County in the South to an audience of more than 1.6 million potential listeners.

“We are the only Catholic radio station in Central Florida and on the Space and Treasure Coasts,” said Bob Groppe, WDMC’s general manager. “This is an opportunity to obey the Lord’s command to ‘Go, therefore and make disciples of all nations…teaching them to observe all that I have commanded you.’ (Mt. 28:19 -20) Listeners can participate in the mission of Catholic radio – the mission to make known the truth about our Catholic moral vision – the truth of life and the path to true happiness. We’re excited about this expansion the Lord has permitted.”

The station’s history has involved a lot of faith and trust from many passionate people to bring them where they are today.

“I was working at Holy Name of Jesus Parish in Indialantic,” Father Connery recalled, “and we bought time on another radio station on Sunday evenings at 7 pm to discuss different topics. EWTN – Eternal Word Television Network was offering free programming 24/7 and I thought it was something we should do. I felt as the Catholic Church, we should be out there so people could hear about our faith and our stories.”

Finally in September 2007, a receiver for a radio station contacted the board. He had found a purchase offer in a desk drawer. The board went to area parishes asking for financial support. They were able to purchase a new broadcast machine, but needed a radio engineer and were told there were very few in the United States.  “The Lord was smiling – radio engineer Carl Kuehn lived two doors away from the Benzs,” recalled McGavern.

The station closed with the receiver on the Tuesday after Easter, 2008, the Feast of the Annunciation, which was fitting as the angel Gabriel is the patron saint of radio. At 12:05 pm on March 29 – WDMC – Divine Mercy Communications was finally broadcasting – the vigil of the Feast of Divine Mercy.

“I felt the Lord was calling me to be faithful to this and started working as general manager in February 2009,” Groppe said. “I learned how to conduct radio-thons, found solutions to broadcasting on a very old tower system in a facility where we didn’t own the land and our lease was running out. In April 2015, the station moved into new offices and it has taken two more years for our new towers to replace the old and begin broadcasting.”

Engineer Carl Kuehn has been with the station throughout the long haul and could barely contain his delight.

“It has been fun to see the amount of support and engagement the Catholic community had to bring this project to fruition,” Kuehn said. “Now the hard work begins – to continue to support and grow the ministry. It’s been a pleasure from day one.”

Marie Norris is a young professional who is also excited.

“I was a senior at Melbourne Central Catholic High School when I started doing my senior volunteer project.  WDMC had just started to broadcast,” explained Norris. “That time spent with the project woke up a passion in me for Catholic radio work and it’s been a tremendous blessing and influence in my life. The new towers symbolize hope – a beacon of hope for the future of Catholic Radio, for Catholics in Central Florida and for our Catholic faith.”