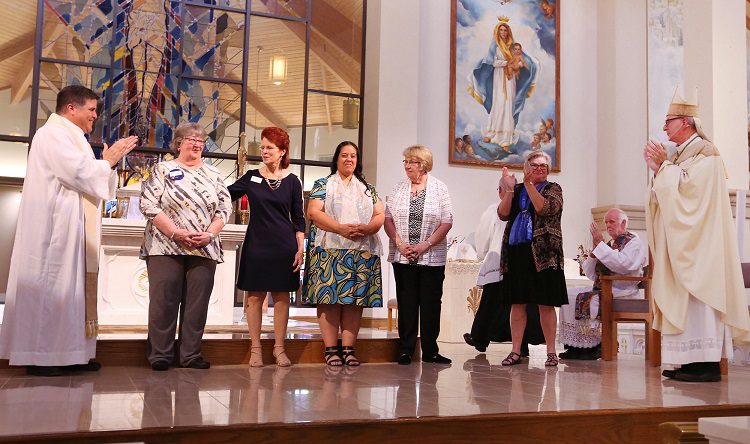 The Orlando Diocesan Council of Catholic Women (ODCCW) has been a part of the diocese since its inception. The theme of this year’s annual convention in Ocala was “50 Years of Merciful Discipleship.” Founding members gathered alongside new ones April 28-30, with a goal of mentoring future leaders, deepening spiritual growth and serving the communities in which they live.

Reflecting on the important role the ODCCW plays, Bishop John Noonan said, “They (ODCCW) were the ones way, way back who helped found a lot of our parishes and helped priests and sisters when they came here from different parts of the world to open schools. So the Catholic women have been a part of the history of our diocese for 50 years and continue to support and help us. We are blessed to have them and we are blessed that they have left such a wonderful legacy to the future generations.”

It was 1968 when Bishop William Borders asked June Sayers of Our Lady of Lourdes Parish in Daytona Beach to set up the ODCCW, almost immediately after the diocese was created. Since then, the diocese has grown from 50 parishes to 79 parishes and 12 missions and the council has grown from three deaneries to five.

Winkie Le Fils, parishioner at All Souls in Sanford and member of the Council of Catholic Women for 60 years (10 years when it was under the Diocese of St. Augustine), commented on the ODCCW’s legislative work. “I researched the resolutions we’ve written on the national level from 1920 to now and we are still working on the same human life issues of dignity and respect. In 1981, we passed a resolution after much division and discussion against chemical, germ and nuclear warfare and it’s happening today… we, as Catholic women, are still standing on the front lines for human rights.”

And the council did notably more than influence legislative issues. It was a forerunner in television communication as a part of “Reel to Real” – a television program that ran for several years on a diocesan channel which offered a segment for the council entitled “Woman’s World.” In 1976, the ODCCW introduced the Billings Method of natural birth control at its convention, presented by Dr. Hannah Klaus and later began a program diocese-wide entitled Catholic Alert, that helped promote the public image of the Church.

Its Leadership Symposium trains members on leadership and issues of the day and known throughout the nation for outstanding education. Past president and member from the age of 22, Julie Drake began the symposium during her presidency along with the Personal Development Training program in the parishes. She said, “We’ve helped women increase their self-confidence, learn how to deal with difficult people and be leaders at all levels.” She notes, “It’s important to encourage and mentor.” Three time affiliate president, Diane Rieves, agrees. A member for 51 years she said, “The best thing I ever did was join the Council of Catholic Women. It made me a better woman.”

The ODCCW service commission reflects Christian values – visiting nursing homes, raising funds for the homeless and suffering locally and abroad, and educating on human trafficking and pornography, to name just a few. At its core is the spirituality commission that seeks to deepen members’ relationship with Christ through mornings of reflection, bible studies and various spiritual development opportunities.

Current ODCCW President Mary Matheus says, “Our mission is the same as the Church’s mission,” referring to the spread of the Gospel. She expressed concern for the future of the organization because membership is down, but Matheus believes ODCCW is needed now more than ever. She added, “The ODCCW is extremely important because women are undervalued. Women have a pivotal role in the formation of our future adults and we have a lot of influence in what happens in our society.”

Incoming president, Kathy Leigh, echoes that statement with her vision for the future. “The ODCCW will continue, as in the words of St. Teresa of Kolkata, to ‘do small things with great love.’”

The ODCCW represents the Catholic women in the Diocese of Orlando through 35 parish affiliations or groups in the five deaneries: Central, Eastern, Northern, Southern and Western.