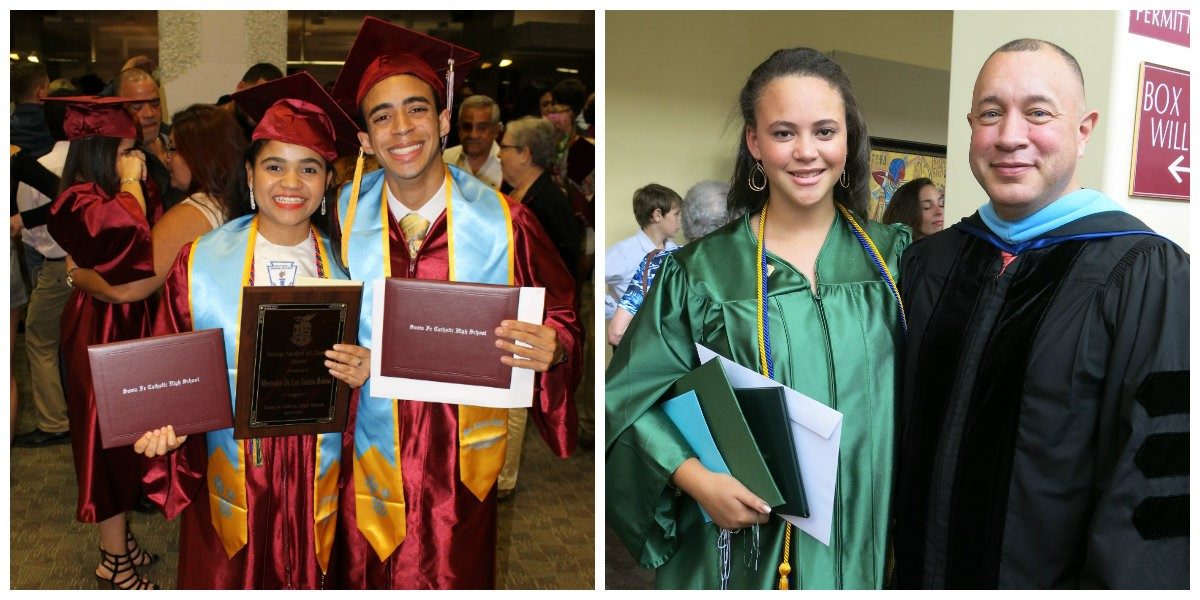 Among the high school graduates in the Diocese of Orlando this year are three friends who have all been reading since they were four-years-old, took college level courses in high school, were members of the National Honor Society who received and college scholarships. These remarkable students, Mercedes, Yamilka and Diomides, are exchange students from the Diocese of Orlando’s sister Diocese, San Juan de la Maguana in the Dominican Republic. They achieved tremendous academic success all while learning a new language and adapting to a new culture.

“These students were high performers and the best in their grades in the Dominican Republic,” said Ursuline Sister Bernadette (Bernie) Mackay, director of the Diocese of Orlando Mission Office. “They spoke very little English when they arrived here. The school staff were very attentive to them, but they had to function in a normal classroom.”

The three students were already set-up well for success. As children, they attended schools established by the Mission Office whose teachers receive extensive training and ongoing support. The schools in the Diocese of San Juan de la Maguana are among the best in the nation. Education is so important to the Mission Office because of the ability to empower students to change the future of their villages.

“Our education program changes lives,” said Sister Mackay. “It sets them apart in the sense of it gives them skills and hopefully they will continue to be leaders and have a broader perspective.”

For Mercedes, Yamilka and Diomides, their college careers begin this fall. Mercedes, who attended Santa Fe Catholic High School in Lakeland, was granted the Glenn W. and Hazelle Paxson Morrison scholarship that gives her four years of tuition to be used in any university of choice. She will attend Polk State College and study civil engineering. Mercedes also received the Bishop Norbert M. Dorsey Award, given each year to a graduating senior who best embodies the values taught at Santa Fe Catholic High School: dependable, honest, responsible, and compassionate.

Yamilka, who attended Father Lopez Catholic High School in Daytona Beach, earned the St. Thomas University’s Catholic Education Continuum scholarship, which will cover the cost of tuition and room and board for four years. She plans to study medicine and become a pediatrician.

Diomides, from Santa Fe High School, received the Catholic High School Award and housing scholarships from St. Thomas University which will cover his tuition and part of housing while he studies computer science.

“To see them receiving their diplomas was an extraordinary moment for all of us who journeyed with these kids,” said Sister Mackay. “They’re all extremely proud of themselves. They will all tell you that this is their moment to make their village proud of them.”