For parishioners of St. Mary’s Syro-Malabar Catholic Church, the chance to worship in their own sacred space has been the fruit of hard work and many prayers. 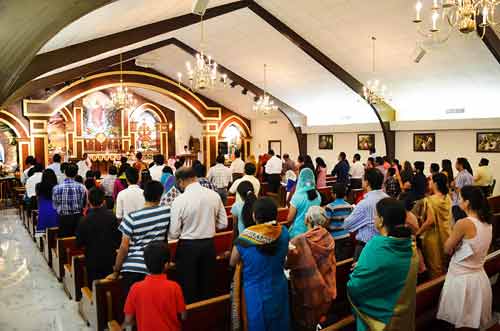 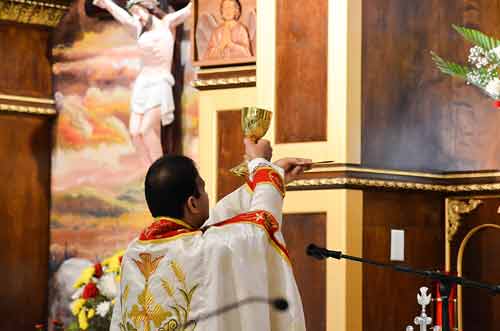 For parishioners of St. Mary’s Syro-Malabar Catholic Church, the chance to worship in their own sacred space has been the fruit of hard work and many prayers.

Father George John Kuppayil  MST, a priest of the Missionary Society of St. Thomas the Apostle is pastor at St. Mary’s and he celebrated the Mass on May 15, where approximately 100 parishioners gathered to worship in their new church located in Sanford.

The Syro-Malabar Church is one of several Eastern Catholic Churches that enjoys the same dignity, rights, and obligations as the Western (Latin Church) to which the majority of Catholic Americans belong. Eastern Catholic Churches have distinctive liturgical and legal systems (Canon Law) that reflect the national or ethnic character of their region of origin. Eastern Catholics are in full communion with Rome and are not part of the Orthodox Church. The Syro-Malabar Church was founded after St. Thomas the Apostle came to preach the Gospel to India in 52 A.D.  While Christian in faith, it is oriental in worship and Indian in culture.

The two-hour Mass, which is prayed in the traditional language of Malayalam from the state of Kerala in India, began with a procession. Children carried platters filled with flowers, a pencil, book and rice and placed them at the base of the altar. This was part of a special observance for Pentecost for children who will attend formation classes for the first time. The children were invited to come forward after Mass to receive a blessing and to trace the name of Jesus in the rice bowl.

During Mass, Indian music filled the air, and many of the women wore the traditional Indian dress called salwar and Saree.  The girl altar servers were dressed in pink and the boys in white. They received the peace blessing of Jesus from the priest and passed it onto the people in the pews by touching hands instead of the tradition of shaking hands. 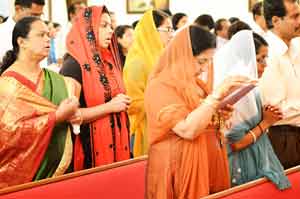 St. Mary’s is the 37th parish of its kind in the United States. The parish has 70 registered families with 74 children taking part in catechism classes before Mass.

“It’s just like having a house of our own,” Father George said. “It took four to five years of work and financial fundraising and prayers that this dream has become a reality. This building has been a long journey.”

St. Mary’s Syro-Malabar Church was consecrated by the Bishop of the St. Thomas Syro-Malabar Diocese of Chicago on May 7. The Syro-Malabar community has been in the Diocese of Orlando since 2008. The community first gathered at Good Shepherd Catholic Church, where Mass was celebrated once a month. In 2011, they moved to Nativity Catholic Church in Longwood with a full-time priest celebrating Mass every Sunday. Father George John Kuppayil started ministering to the community in 2013 before moving to St. Charles Borromeo Catholic Church. With the new church in Sanford, Mass is celebrated at 10 a.m. on Sundays, Saturdays at 5 p.m., Monday-Thursday at 7 p.m. and Fridays at 9 a.m. 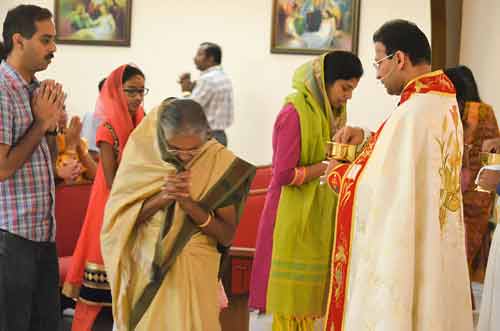 The church is adorned with chandeliers and vibrant murals depicting Jesus ascending into heaven in the center with a gold cross below, known as the Mar Thoma Cross, the cultural symbol of St. Thomas. There are three steps on the altar, which signify the steps to mount Calvary. Wood paneling and carvings adorn the altar depicting an eagle representing St. John the evangelist, a winged man representing St. Matthew, a winged lion for St. Mark, and a winged bull representing the Gospel of St. Luke. A statue of Mary is on the right of the altar, and to the left is a statue of St. Thomas.

Dr. Anoop Pulickal M.D., who is originally from India, moved to the area from Rhode Island two years ago, said it’s a beautiful church that is the fruit of many people’s efforts.

“It’s an incredible privilege to have a church like this,” he said. “It’s the epicenter of our faith. It’s important to transfer our faith to the next generation, and this facilitates that in terms of worship and CCD classes.”